If a philosophy obstructs collaborative opportunities, what's the point? 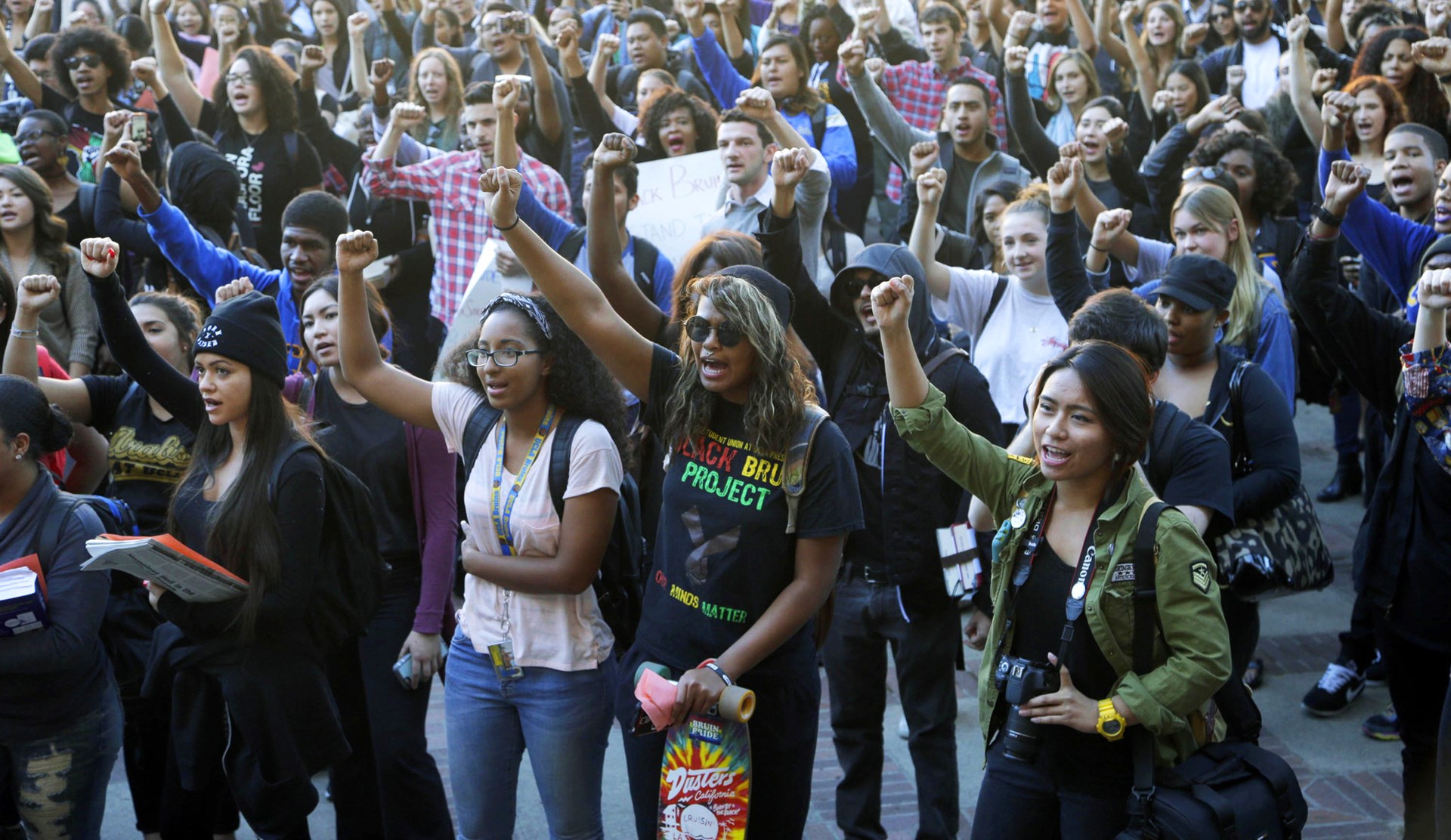 Too many liberty advocates are aiming for the easy targets of “political correctness” while taking their sights off of the true enemy of liberty: those with actual political power. This trend has been accelerating for years, probably because culture wars are fun, generate attention and engagement, and have soft and vulnerable targets. By comparison, the real problem of State power – imposed on the whole of society, not just paying students – is much more difficult.

An example is the debate about college “safe spaces,” trigger warnings, and so on. It is easy to caricature campus life as a clear divide between PC administrators, SJW student groups, and lefty professors on the one hand, and Trump-backing campus rebels on the other. That simple model might describe some environments sometimes, but it comes nowhere near describing the typical experience.

It is easy to caricature campus life as a clear divide between the Left and Right, but it comes nowhere near describing the typical experience.The Chronicle of Higher Education last year provided a roundup of the debate about speech on campus. What this really comes down to is a matter of campus-by-campus policy, not dissimilar to what many institutions in the corporate world face. Administrators at the University of Chicago decided last year that prevailing practices concerning speech rights had swung too far in the direction of command and control, and, by clarifying its policy, Chicago enjoyed a public-relations boon. Look for others to follow suit in 2017.

Colleges will continue to tweak campus handbooks in light of all kinds of pressures. It’s up to the paying students to reward the system they like the most – just as with every market competition for customers. What the rules should look like give rise to interesting debates. However, consider that the authority vested in the local college dean grants him no ability to illegally detain and prosecute me without due process. He can’t tax, draft, or regulate.

College kids, administrators, and professors really are not the most prominent threat to liberty these days. I can think of at least 10 other despotic institutions right off the top of my head – ones that actually pose direct threats to my property, privacy, and life. None of them involve 18-year old kids who just read Chomsky for the first time.

College campuses have been derided for more than half a century (God and Man at Yale by Bill Buckley came in 1951) as vacuous echo chambers for left-leaning politics, so how is this latest criticism anything new or original? At their worst, college campuses serve as isolated islands surrounded by the tumultuous seas of reality.

Furthermore, if you find your blood pressure rising about the antics of college students, you may need to ask yourself, who is the one who is truly “triggered”?

Immigration is certainly a hot topic, even outside of the libertarian blogosphere. However, the issue has pushed some toward the unsettling direction of nativism. Far too often, the conversation turns into a race to the bottom where blaming immigrants is the gut reaction.

A case in point is Justin Moldow of Liberty Hangout. Moldow makes his case against “open borders” by claiming that “they’re communist.” Remember all of those communist countries, like the Soviet Union, North Korea, Cuba, and China that let their citizens come and go as they pleased? Me neither.

Moldow cites the tragedy of the commons to clarify his point, suggesting that the main problem with immigration is immigrant’s abuse of the welfare state. Immigrants “are using scarce resources that they haven’t paid for,” Moldow writes.

Blaming immigrants for our public indebtedness while not going after military spending is penny wise and pound foolish.Undoubtedly, the costliness of the welfare state deserves to be addressed. However, in the grand scheme of things, it isn’t the biggest expense at the moment. Let’s tackle the biggest “welfare queens” first, such as the military and the contractors who profit on atrocities carried out abroad, before we devote so much time and energy on more trivial cases.

The US spends roughly $26 billion a year in Temporary Assistance to Needy Families (TANF) for all citizens, not just immigrants. Meanwhile, the US military budget is nearly $600 billion annually, and likely to continue to grow unabated.

Blaming immigrants for our public indebtedness, while not going after military spending is penny wise and pound foolish. A quick search of Liberty Hangout didn’t produce any meaningful commentary on military spending, only more anti-immigration rants.

Besides, libertarians should never be discouraged from supporting the free movement of people simply because it doesn’t fit into the proper sequence of abolishing government programs. (Imagine Ronald Reagan throwing a curveball into his famous Berlin Wall speech: “Mr. Gorbachev, tear down this wall this wall … right after you dismantle your free lunch program first, mmkay?”)

Immigration controls are controls on people, and it is difficult to control some people without also controlling others. Sometimes it is because it is not easy to distinguish those over whom control is sought from those who are considered exempt. At other times it may be because it is not possible to restrict particular persons save by coopting others without whose cooperation success would be impossible. And on occasion it may be necessary in order to control a few to put the liberty of almost everyone into abeyance. Immigration controls are not unique in this respect — the logic of human control is everywhere the same.

The Politics of Strange Bedfellows

Understandably, many of the objections that libertarians vocalize are in response to the rise in popularity of identity politics. And these objections are certainly warranted in the context of libertarian philosophical principles.

But all philosophical orthodoxy is rendered meaningless when it obstructs opportunities to collaborate with like-minded individuals.

Consider Black Lives Matter, for example. No three words have proven to be more divisive than those. Many features of BLM’s stated program are inconsistent with liberty and terrible for blacks as well. A movement that began in reaction to police abuse mutated into something else – oftentimes an unnecessary spectacle characterized by property damage.

All philosophical orthodoxy is rendered meaningless when it obstructs opportunities to collaborate with like-minded individuals.However, BLM brought national attention to a number of issues also championed by libertarians – more specifically, those enumerated in BLM’s Campaign Zero initiative. Though not explicitly (or coherently) libertarian, Campaign Zero targets police brutality by recommending some of the following solutions: end broken windows policing, limit use of force, demilitarization, and ending for-profit policing – all issues everyone can easily get behind.

Do libertarians and BLM activist see completely eye-to-eye on everything? Absolutely not. We may never agree on the fine print of policies. The devil, as always, is in the details.

However, petty differences should not get in the way of teaming up with potential allies for addressing the truly menacing threats. What’s more important: dismantling the drug war or arguing about white privilege? Stopping the flow of mass incarceration or mindlessly debating the merits of identity politics? Personally, I consider the alarming rate of police militarization to be a bigger threat to my well-being (and that of others) than winning a trivial squabble over the privilege inherent in my ethnicity.

Beating up on politically-correct adolescents and dole-draining immigrants might make for fun in frat houses. It’s an easy habit to pick up; the jokes and strawman characterizations practically write themselves.

But all of this mockery makes for lousy reform. Plus, libertarians take their eyes off the prize when they behave in such an irreverent manner. Radley Balko tweeted a great characterization of this trend:

What did you do as Trump gave power to authoritarians and bigots?
-I ridiculed minorities and college students who cried.

Say what you want about Trump. He does offer opportunities for collaboration with libertarians – or at least some palatable bones thrown our way here and there. What other President has challenged the wastefulness of the F-35 program or appointed a cabinet member who advocated abolishing the very department he will oversee (even if he couldn’t remember its name)?

But the issue here isn’t Trump per se; it’s the authority he – and every other politician before him – embodies. Libertarians should never move our crosshairs away from the true target: the dangerous power that political elites wield to indebt, imprison, and destroy.

Focusing on those without power is counterproductive. A good rule of thumb for all those who oppose authoritarianism: always punch up, never down. And always find allies who are willing to fight totalitarianism – the real thing, not just some annoying campus administrator – whenever you can.