California Has the Highest Poverty Rate in America. Why?

“One of the great mistakes is to judge policies and programs by their intentions rather than their results.” - Milton Friedman

Can you guess which state has the highest poverty rate in the U.S.?

Many people would say Mississippi. That’s how I would have responded if you had asked me this morning, and I would have been right in a sense.

There are two different ways to measure poverty, you see. One accounts for cost-of-living in different states; one does not. The method that accounts for living costs (the Supplemental Poverty Measure) is more accurate, and it was introduced in 2011 by the U.S. Census.

According to this measurement, the poverty capital of America is not Mississippi. It’s California, PolitFact says.

It was a point recently raised by California Assembly Republican Leader Chad Mayer at a legislative forum in Sacramento.

"If you look at the official poverty measure in California, we’re about average with the rest of the country," Mayes said. "But if you use the supplemental poverty measure, we are in the lead. We have the highest poverty rate in the nation -- higher than New Mexico, higher than any of the Southern states, Louisiana, Alabama, higher than Idaho."

Percentage of Poverty in Each State.

Mark Perry of the American Enterprise Institute offers a chart that breaks down how each state ranks. Take a look: 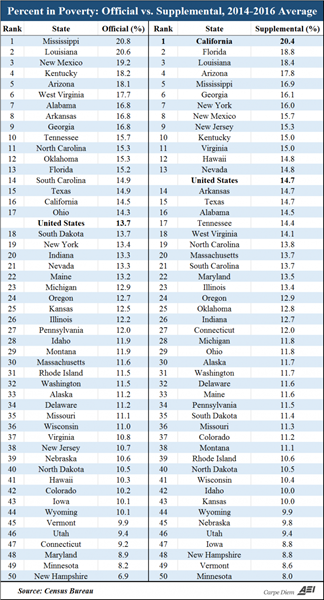 How is this possible? The Golden State’s economic growth has been robust in recent years, data show.

“California is the chief reason America is the only developed economy to achieve record GDP growth since the financial crisis of 2008 and ensuing global recession,” Bloomberg reported last year. “The capitalist juggernaut that is California helps explain why the state's per capita income increased 9.5 percent since 2015, the most of any state and the most since 2012, according to data compiled by Bloomberg.”

Nor does California’s notoriety as the nation’s most impoverished state stem from a lack of programs designed to alleviate poverty. Kerry Jackson explains in the Los Angeles Times:

“Sacramento and local governments have spent massive amounts in the cause. Several state and municipal benefit programs overlap with one another; in some cases, individuals with incomes 200% above the poverty line receive benefits. California state and local governments spent nearly $958 billion from 1992 through 2015 on public welfare programs, including cash-assistance payments, vendor payments and “other public welfare,” according to the Census Bureau. California, with 12% of the American population, is home today to about one in three of the nation’s welfare recipients.”

So how is it that California, which has spent nearly $1 trillion on antipoverty programs, has the highest poverty rate in the nation?

Jackson, a fellow at the Pacific Research Institute, suggests that the state’s war on poverty is one of the causes of California’s impoverished state, and why it is home to about one-third of the nation’s welfare population despite having just 12 percent of the population.

It turns out that state and local bureaucrats who administer California’s antipoverty programs have proven stubbornly resistant to pro-work reforms that have been effective at spurring individuals to pull themselves out of poverty. It’s a phenomenon familiar to those who have read the scholarship of economist Robert Niskanen, whose model of bureaucratic behavior suggested that bureaucrats tend to “maximize their own utility” rather than the interests of their constituents. 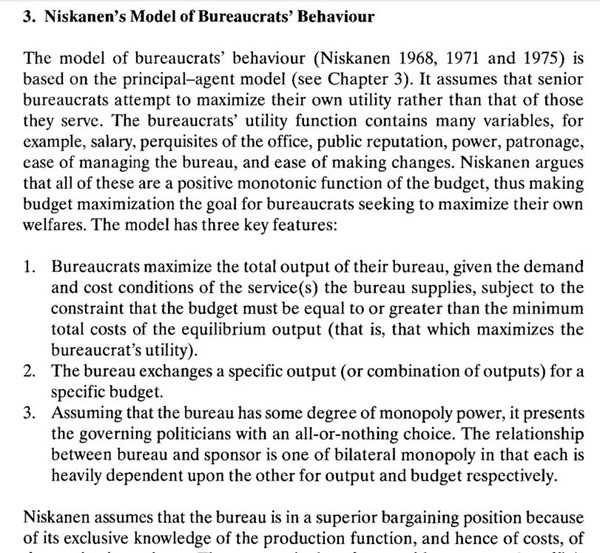 This, along with other progressive policies that drive up housing and energy costs, along with a high minimum wage that reduces employment opportunities for low-skilled workers, is the source of California’s poverty problem, Jackson contends.

Is Jackson correct? I’m not sure, but his theory sounds more than a bit plausible. It’s a problem Nobel Prize-winning economist Milton Friedman warned about more than four decades ago.

“One of the great mistakes is to judge policies and programs by their intentions rather than their results,” Friedman told Richard Heffner in a televised interview in 1975 interview.