Botswana: A Diamond in the Rough 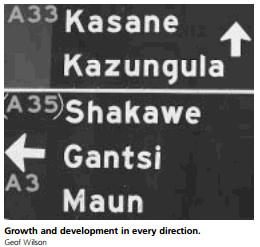 Over the past 40 years Botswana has been sub-Saharan Africa’s fastest-growing country and one of the fastest-growing countries in the world. Though it started off as one of the poorest countries in the world, its per capita income now compares favorably with many Mediterranean counterparts. Like most countries, the financial crisis has slowed Botswana’s recent economic growth, and large “stimulus” packages have ostensibly been introduced to reverse that direction, but, even with Botswana’s poor economic performance in 2008 and 2009, its contrast with the rest of sub-Saharan Africa is stark. As the graph below shows, sub-Saharan Africa (SSA) as a whole (with Botswana included) has seen dismal growth since 1965, while Botswana has enjoyed more than a 15-fold increase in real gross domestic product.

While many attribute the country’s success to diamond revenue and a homogenous population, Botswana’s success actually has resulted, first and foremost, from economic freedom. Until last year Botswana was the most economically free sub-Saharan African nation in the Fraser Institute’s Index of Economic Freedom; Mauritius has nudged ahead of Botswana in the most recent report. The country’s marginal tax rates are some of the lowest in the world; its borders are more open than those of many other African countries; and the government has a long tradition of respecting private property and upholding the rule of law. As historian Robert Guest sums up Botswana’s postcolonial policies, “Since independence, Botswana has been governed sensibly, cautiously, and more or less honestly.”

The honesty in policy described by Guest has helped Botswana escape the so-called “African tragedy” of poverty. By conventional standards the country is an upper-middle-income country, and throughout my time in Botswana a few years ago I was struck by how normal the country seemed. It is safe to walk around after dark, and violent crime rates are quite low. The drinking water is generally fine. Its capital city, Gaborone, is buzzing with commerce, and a number of shopping malls there have high-end merchandise and quality restaurants similar to those found in any Western country. According to government officials, no Batswana (the appropriate term for people of Botswana) has ever died from the country’s frequent droughts, and basic education levels and public road networks are far superior to those in neighboring countries. As one tourist put it, “This place is really quite boring.” (To which I replied, “Yeah, maybe that’s an idea for a paper: “Botswana: The Beauty of Being Boring.”)

In 1965 the country, a former protectorate of Great Britain, was a newly independent nation of desert land and cattle herders. Its future was deemed grim by the experts, and many expected Botswana to remain poor and heavily dependent on South Africa. Yet much like the Asian “tigers,” Botswana’s success stands out as one of the truly exceptional sustained growth runs in the twentieth century. It has averaged 7 percent annual growth in per capita income since independence. 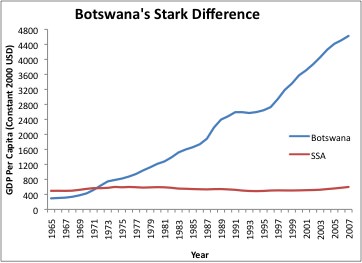 Attempts to explain Botswana’s development as the result of a relatively homogeneous culture are flawed. If cultural and ethnic homogeneity played such a crucial role in promoting development, why then was Botswana so poor at the time of independence? It probably did not hurt reformers to be dealing with a homogeneous population during the postcolonial period, but culture in and of itself was not enough to guarantee Botswana’s growth explosion. Becoming free from Great Britain and subsequently promoting sound economic policies were the additional and far more important ingredients of Botswana’s success.

Botswana’s pursuit of racial harmony, however, did help it avoid the turmoil that other sub-Saharan countries saw.

In the early years of Botswana’s postcolonial development the leadership behaved much differently from many other African leaders. Botswana’s first president, Seretse Khama, was a charismatic leader who sought racial harmony and welcomed the advice of British expatriates. Rather than follow the lead of most other African leaders and embrace Marxism, Khama and his majority coalition in the Botswana Democratic Party (BDP) chose to sit down with British expatriates and minority stakeholders when formulating policy. The small, informal meetings held by the BDP made policies more legitimate and served as an implicit compact between the BDP and other important interest groups.

The tolerance and cosmopolitanism of Khama and the BDP were more than lip service. When it came to border issues, for example, the government welcomed thousands of refugees being persecuted by racist regimes in Rhodesia and elsewhere. The official position of the government was to recognize the basic dignity of all individuals and maintain open borders.

Tolerance also shaped domestic policy, as the new government was careful to incorporate traditional indigenous institutions throughout the reform process. For example, its kgotla system, which predated colonialism and encouraged dissent in the public realm and unanimity in decisions, remains part of modern-day Botswana. Its precolonial tribal system of law and dispute resolution was brought into modern-day institutions to some extent through the House of Chiefs, which serves as an advisory body to the legislature. While the postcolonial reforms did not completely embrace the traditional institutions of the precolonial and colonial periods, steps were taken to preserve valuable parts of Botswana’s history and culture. By contrast, in many other sub-Saharan African nations so-called “modernization” meant the complete dismantling and elimination of all things traditional.

As the new government was being formed in the mid-1960s, few resources were available for significant “public” spending. Rather than tax people excessively, the government kept tax rates low and predictable. Low taxes encouraged entrepreneurial activity and reduced tax evasion and corruption. Khama and the BDP could have borrowed substantially, but they had a fear of accumulating debt and instead kept spending on traditional government programs like defense and education to minimal levels. The government could not afford a national defense force early on in the reform process, so the country simply went nearly ten years without it.

The government sought to constrain longer-term spending by introducing five-year National Development Plans (NDPs) to set government spending priorities. Once agreed on, they can only be amended with overwhelming support from parliament. In addition to establishing NDPs, the government constrained spending by applying strict cost-benefit standards to expenditures.

The generally free-market approach to economic development taken by Botswana’s leadership in the early years had the effect many pro-market economists would predict: rapid growth and serious quality-of-life improvements for average Batswana. This development was most rapid during the first ten years as an independent nation—years that predated most of the diamond discoveries and extraction. Moreover, diamonds are not normally viewed as a boon to development. In much of the “natural resource curse” literature in economics, things like diamonds are said to hamper development because they lead to weak institutions and rent-seeking. As Fareed Zakaria puts it in his popular book, The Future of Freedom,

Why are unearned riches [like oil, diamonds, and gold] such a curse? Because they impede the development of modern political institutions, laws, and bureaucracies. Let us cynically assume that any government’s chief goal is to give itself greater wealth and power. In a country with no resources, for the state to get rich, society has to get rich so that the government can then tax this wealth. In this sense East Asia was blessed in that it was dirt poor. Its regimes had to work hard to create effective government because that was the only way to enrich the country and thus the state. Governments with treasure in their soil have it easy; they are “trust-fund” states. They get fat on revenues from mineral or oil sales and don’t have to tackle the far more difficult task of creating a framework of laws and institutions that generate wealth.

Thus Botswana has not grown because of, but rather despite, its diamond wealth.

To be sure, Botswana faces some serious challenges. First, government spending as a percentage of GDP in Botswana is too high and it has been growing rapidly. The “hands off” approach of leadership in the early years has largely been forgotten and given way to big government. Botswana’s large, bloated government now funds a large national defense, covers education through college, and has extended health care coverage in the wake of a serious HIV/AIDS crisis. The government’s steadily increasing scale and scope has made Botswana a less economically free country in recent years, and it could be stifling to future growth.

Second, Botswana’s courts and property rights have not been free from interference. The rule of law, in particular, has sometimes been relaxed in cases involving government officials. Indigenous groups, such as the Kalahari Bushmen (also known as the Sans, among other names) have consistently been oppressed by the government and unfavorable legal rulings. And the government’s attitude toward foreigners, particularly Zimbabweans, has grown increasingly xenophobic. Continued shifts away from the cosmopolitanism of Khama in recent years make Botswana’s future growth far from certain.

The chief lesson to take from Botswana’s postcolonial success is the following: When given a chance, economic freedom can produce beneficial long-run growth results in poor African countries. Many leaders in sub-Saharan Africa dismiss good policy stories like the one being told here as “Western ideas and models” unsuitable for Africa. From where they sit, Africa’s history is unique and different. The differences are significant enough to make “standard approaches,” such as economic freedom, futile endeavors. While there is much to be said for not imposing external institutions on people, Botswana is a case of Africans finding economic freedom on their own. As a result, Batswana have enjoyed higher living standards.