Bitcoin Is Less Volatile than the Euro

Bitcoin volatility is trending downwards, even as volatility in other cryptocurrencies remain high.

Bitcoin volatility has fallen since 2011 and compared to the U.S. dollar currently sits at about 3-4 times higher than the Japanese yen, British pound, and euro. High volatility in the digital currency space has long been cited as a reason against adoption. But, as charts and analysis demonstrate, it is very likely that Bitcoin volatility is trending downwards, even as volatility in other cryptocurrencies remain high.

The Bitcoin industry generally highlights key indicators like price, transaction volume, bitcoin wallet numbers and trading volumes to underscore Bitcoin’s increasing popularity. All of these factors have jumped in recent years. But Bitcoin’s volatility has fallen, now sitting at approximately 5%. For comparison, gold volatility averages approximately 1.2% and major fiat currencies between 0.5% and 1.0%.

Bitcoin’s volatility, a measure of how much its price varies over time, has long been cited as the digital currency’s downfall. Each day, Bitcoin’s value goes up or down – and oftentimes both. Measuring volatility is important to judging an asset’s overall risk profile. High volatility is cited as to why sophisticated investors and the mainstream public stay away from Bitcoin. 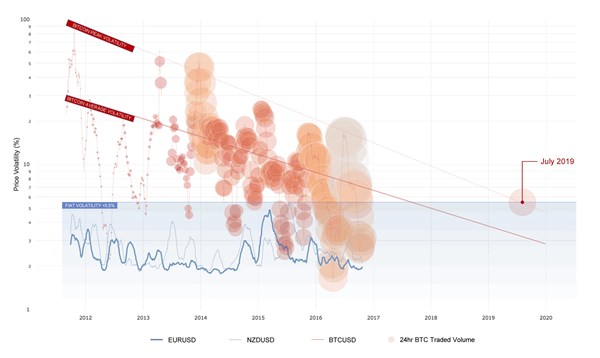 Investors generally limit exposure to volatile assets by not holding them or hedging. Hedging Bitcoin is tough due to a dearth of options to short Bitcoin. Further, the more volatile an asset, the more expensive it is to hedge.

Monied investors in China are leaving their money in the digital currency.

There are external factors which could contribute to currency-pair volatility like fiscal policy, geopolitical disruption and other factors. Bitcoin volatility could also be a function of transaction volume, as some suggest.

An end to zero fee futures trading in China has led some to speculate Bitcoin volatility will decrease in the coming months and years. When the change was announced, Bitcoin trading volume crashed 90%. In fact, most volatility so far in 2017 is credited to actions and statements by the Chinese government. Bitcoin.com reported earlier this year that monied investors in China are leaving their money in the digital currency.

“We are starting to see a lot of smart money enter into the space and stay there,” said Ryan Rabaglia, Head Trader for Octagon Strategy, a Commodity and Digital Asset Trading firm based in Hong Kong. “In the form of small to medium sized institutions taking much larger positions in [bitcoin] and a natural progression to larger ones is sure to follow. With all the uncertainties surrounding us in traditional product spaces, alternatives are being sought, and although this space is still foreign to most, it’s not preventing the capital inflows we’re seeing.”

All Time Highs Amid Low in Volatility

The number of Bitcoin transactions has skyrocketed throughout the digital currency’s lifespan, as has the price, which currently sits near an all-time high after crossing the $1,000 threshold twice so far in 2017. The number of bitcoin wallets at popular multi-service provider Blockchain.info has increased, as well, in the past eight years. Trading volumes are also at all-time highs. Yet, over time, Bitcoin price volatility has declined.

Justin is an Associate Editor with the Bitcoin.com News team.