Are Democracies Roving or Stationary Bandits?

Tax competition is one of the few things that can make politicians do the right thing.

Mancur Olson (1932-1998) was a great economist who came up with a very useful analogy to help explain the behavior of many governments. He pointed out that a “roving bandit” has an incentive to maximize short-run plunder by stealing everything from victims (i.e. a 100 percent tax rate), whereas a “stationary bandit” has an incentive to maximize long-run plunder by stealing just a portion of what victims produce every year (i.e., the revenue-maximizing tax rate).

Tyler Cowen of George Mason University elaborates on this theory in this very helpful video.

As you can see, Olson’s theory mostly is used to analyze and explain the behavior of autocratic governments. Now let’s apply these lessons to political behavior in modern democracies.

I wrote last year about a field of economic theory called “public choice” to help explain how and why the democratic process often generates bad results. Simply stated, politicians and special interests have powerful incentives to use government coercion to enrich themselves while ordinary taxpayers and consumers have a much smaller incentive to fight against that kind of plunder. 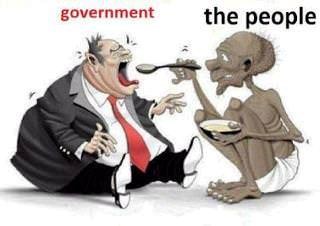 But what’s the best way to think about these politicians and interest groups? Are they roving bandits or stationary bandits?

The answer is both. To the extent that they think their power is temporary, they’ll behave like roving bandits, extracting as much money from taxpayers and consumers as possible.

Though if you think of democracies as duopolies, with two parties and rotating control of government, then each party will also behave like a stationary bandit, understanding that it’s not a good idea to strangle the goose that lays the golden eggs.

And this is one of the reasons why I’m a big fan of “tax competition.” Simply stated, politicians and special interests constrain their greed when they know that potential victims have the ability to escape.

Here’s a report from the Wall Street Journal that is a perfect example of my argument.

And such steps may be necessary. In other words, Germany may reduce tax rates, not because politicians want to do the right thing, but rather because they fear they’ll lose jobs and investment (i.e., sources of tax revenue) to other jurisdictions.

U.S. President-elect Donald Trump has said he would like to cut the corporate tax rate from 35% to 15% as part of a broader tax overhaul. In November, U.K. Prime Minister Theresa May said the main corporate rate there should fall from 20% to 17% by 2020. These followed announcements about corporate tax-rate cuts by Japan, Canada, Italy and France.

Let’s look at another example.

I made the economic case for Brexit in large part because the European Union is controlled by anti-tax competition bureaucrats and politicians in Brussels.

Well, it appears that the British vote for independence is already paying dividends as seen by comments from the U.K.’s Chancellor of the Exchequer.

Philip Hammond warned yesterday that the Government will come out fighting with tax cuts if the EU tries to wound Britain by refusing a trade deal. …Yesterday, Mr. Hammond was asked by a German newspaper if the UK could become a tax haven by further lowering corporation tax in order to attract businesses if Brussels denies a deal. In his strongest language yet on Brexit, the Chancellor said he was optimistic a reciprocal deal on market access could be struck… But he added: …‘In this case, we could be forced to change our economic model and we will have to change our model to regain competitiveness. And you can be sure we will do whatever we have to do. …We will change our model, and we will come back, and we will be competitively engaged.’ …Earlier this year Mrs May committed Britain to having the lowest corporation tax of the world’s 20 biggest economies. The intention is a rate of 17 per cent by 2020.

In other words, yet another case of politicians doing the right thing because of tax competition.

The stationary bandits described by Olson are being forced to adopt better tax policy.

So it’s very appropriate to close with some wise counsel from a Wall Street Journal editorial.

P.S. Since we’re looking at tax competition, Europe, and bandits, keep in mind there’s considerable academic work showing that Europe became a rich continent precisely because there were many small nations that competed with each other. Those jurisdictions felt pressure to adopt good policy because the various leaders wanted lots of economic activity to tax. All of which helps to explain why modern statists are so hostile to decentralization and federalism.