Announcing the Winner of the 2017 Bettina Greaves Distinguished Ambassador Award

The Foundation for Economic Education would like to congratulate Ms. Savannah Lindquist of Old Dominion University, the winner of FEE’s first Bettina Greaves Distinguished Ambassador Award.

The Bettina Greaves Distinguished Ambassador Award, named after the incomparable woman whose influence has shaped FEE since 1951, recognizes the Campus Ambassador who has earned the most points in the program through activism, outreach, and engagement. Ms. Lindquist, who joined the program in February 2017, has earned more than 1,400 points. The award is accompanied by an internship offer at FEE or a $1,000 cash prize.

Savannah Lindquist is the North American Communications Chair for Students For Liberty. She is also active in her church and serves as a Crisis Counselor at the Crisis Text Line. Her writing has been featured on FEE.org, The Washington Examiner, the Western Free Press, and several other sites. She is a passionate advocate of gun ownership rights, free speech, and free-market economics.

Ms. Lindquist has hosted countless on-campus activities over the past eleven months. She toured the state of Virginia with a homemade debt clock, staged a funeral for our civil liberties, and organized a satirical protest calling for the redistribution of GPAs. She has distributed hundreds of FEE’s books in Virginia, Pennsylvania, Maryland, and New York. She has worked closely with FEE staff to represent the organization at conferences in three different states. She recruited six Campus Ambassadors who have, in turn, recruited almost twenty more. Her impact on this program has been immeasurable. Savannah has set the bar for what a dedicated Campus Ambassador can accomplish in a short period of time, and we are grateful for her service to this organization and to the cause of human liberty. 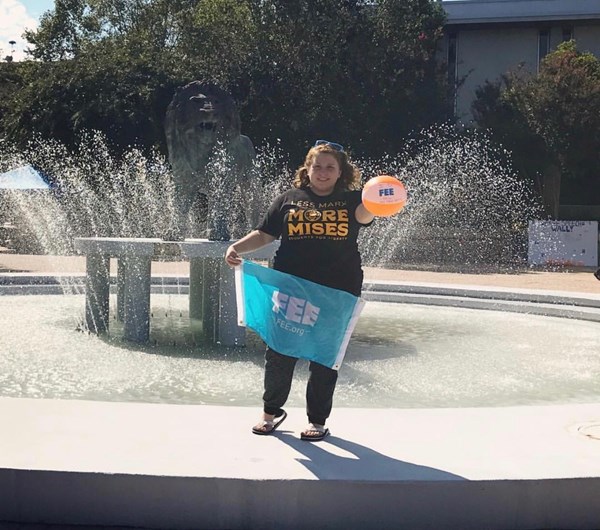