Retirement outlays will eat up 43% of Brazil's budget.

When I write about poorly designed entitlement programs, I will warn about America’s Greek future. Simply stated, we will suffer the same chaos and disarray now plaguing Greece if we don’t engage in serious reform.

Ideally sooner rather than later.

But when I write about state governments, perhaps it would be more appropriate to warn about a Brazilian future. That’s because many American states have made unaffordable and unfunded promises to give lavish benefits to retired bureaucrats, a topic that I’ve addressed on numerous occasions.

Twenty years before Michel Temer became president of Brazil, he did something millions of his compatriots do, at great cost to the country’s coffers: He retired at age 55 and started collecting a generous pension. Delaying that moment until age 65 is at the center of Mr. Temer’s proposed economic overhaul. …making that happen is seen as a make-or-break test of whether the government can get its arms around mounting economic problems like rising debt, low investment and a stubborn recession now entering its third year. New pension rules are considered central to fixing an insolvent system.

It’s easy to understand why the system is bankrupt when you read the details.

…some retirees receive pensions before age 50 and surviving spouses can receive full pensions of the deceased while still drawing their own. The generosity of Brazil’s pension system is legendary—and, economists say, troubling as the country’s fertility rate plummets and life expectancy climbs. João Mansur, a long-time state legislator in Paraná state, served as interim governor there for 39 days in 1973, a stint that qualified him to retire with a $8,000 monthly pension. …Other former public workers who retire not only reap nearly the same income they got while on the job, but also see their checks get bumped up whenever those still working in the same job category get raises. …Retirement outlays will eat up 43% of the $422-billion national budget this year. …Demographics are playing against a generous system created in great part to bridge Brazil’s infamous social gap. Official statistics say there are 11 retirees for every 100 working-age Brazilians; that will rise to 44 per 100 by 2060.

Fixing this mess won’t be easy.

Brazil’s constitution must be amended to allow its pension system to be restructured… Mr. Temer has already been forced to make a series of major compromises, including exempting state and local government employees from the overhaul. …legislators have sought to further water down Mr. Temer’s proposals, by for instance maintaining the lower retirement ages for women and dragging out the transition from the old social-security regime to the new one.

In other words, Brazilian politicians are in the same position Greek politicians were in back in 2003. There’s a catastrophically bad fiscal forecast and the only issue is whether reforms will happen before a crisis actually begins. If you really want to be pessimistic, it’s even possible that Brazil has passed the tipping point of too much government dependency.

In any event, it appears that legislators prefer to kick the pension can down the road – even though that will make the problem harder to solve. Assuming they ever want to solve it.

Which is exactly what’s happening at the state level in America.

Consider these passages from a recent Bloomberg column.

Unfunded pension obligations have risen to $1.9 trillion from $292 billion since 2007. Credit rating firms have begun downgrading states and municipalities whose pensions risk overwhelming their budgets. New Jersey and the cities of Chicago, Houston and Dallas are some of the issuers in the crosshairs. …unlike their private peers, public pensions discount their liabilities using the rate of returns they assume their overall portfolio will generate. …Put differently, companies have been forced to set aside something closer to what it will really cost to service their obligations as opposed to the fantasy figures allowed among public pensions. …many cities and potentially states would buckle under the weight of more realistic assumed rates of return. By some estimates, unfunded liabilities would triple to upwards of $6 trillion if the prevailing yields on Treasuries were used.

But this looming disaster will not hit all states equally.

Here’s a map from the Tax Foundation which shows a tiny handful of states actually have funded their pensions (in other words, they may provide extravagant benefits, but at least they’ve set aside enough money to finance them). Most states, though, have big shortfalls.

The lighter the color, the bigger the financing gap. 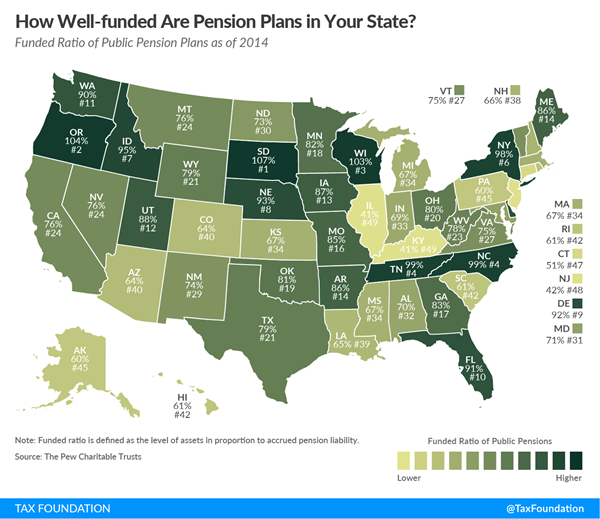 To get a sense of the states that have a very good economic outlook, look for a combination of zero income taxes and small unfunded liabilities.

South Dakota (best tax system and negative pension liability!) gets the top marks, followed by Tennessee and Florida. Honorable mention for the state of Washington.

And is anyone surprised that Illinois is tied for last place? Or that Connecticut and New Jersey are near the bottom? Kentucky’s awful position, by contrast, is somewhat unexpected.

P.S. Brazil’s government may kick the can down the road on pension reform, but at least they added a spending cap to their constitution.