Rhetoric about the “deep state” rubs me the wrong way. 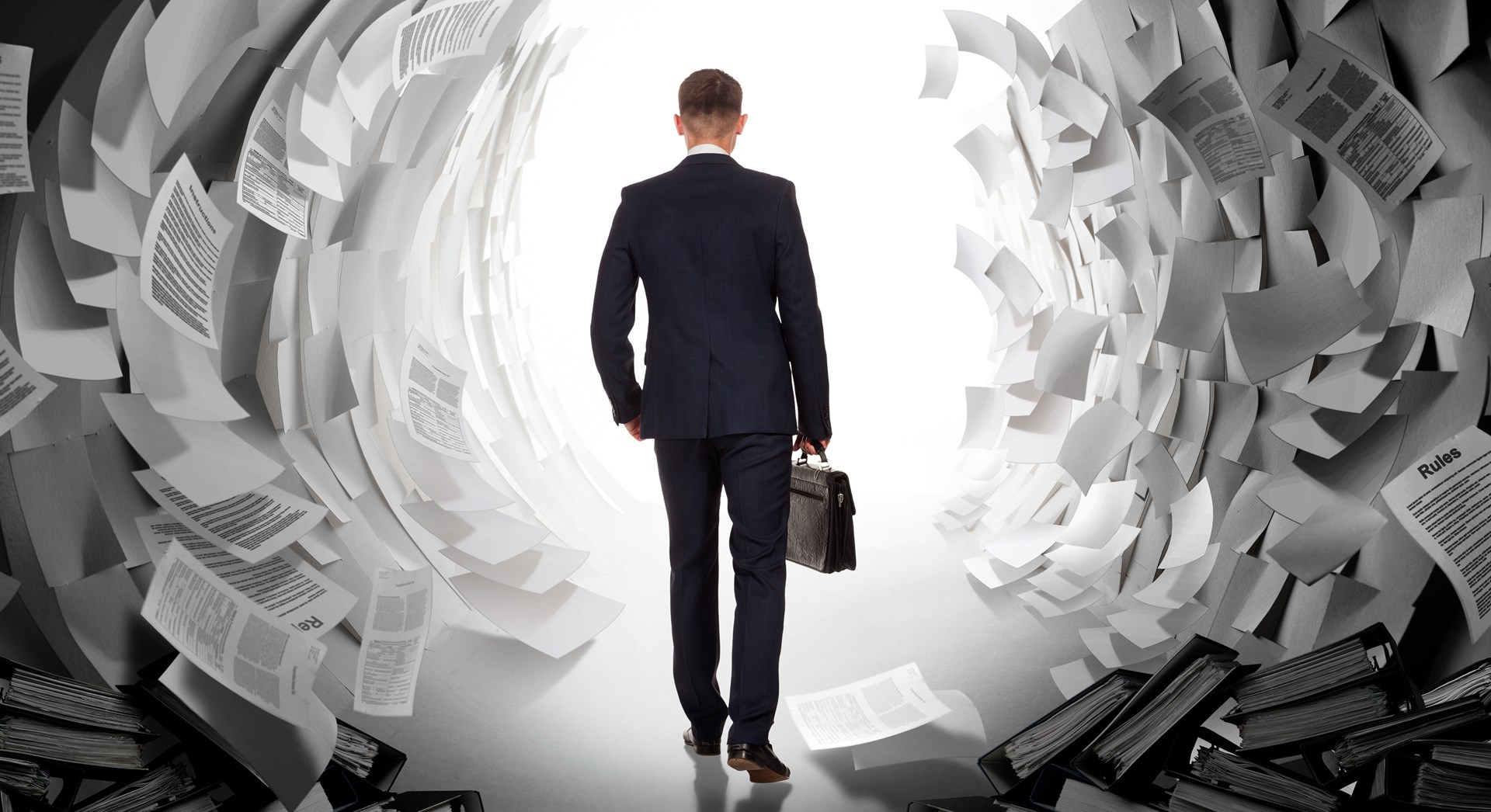 I’m not a fan of conspiracy theories. When people ask me whether there is some sinister, behind-the-scenes cabal running Washington, I tell them that petty corruption, self-interest, and “public choice” are much better explanations for the nonsensical policies being imposed on the country.

So you won’t be surprised that rhetoric about the “deep state” rubs me the wrong way. If the term simply was used to describe D.C.’s bloated, self-interested, and left-leaning bureaucracies, that would be okay. But it seems that the phrase also implies some sort of secret master plan on the part of shadowy insiders.

To be blunt, the people in Washington don’t have the competence to design, implement, and enforce any type of master plan. Yes, we have a Leviathan state, but it’s much more accurate to think of Uncle Sam as a covetous, obese, and blundering oaf (as illustrated by my collection of cartoons).

That being said, that oaf is not a friend of liberty, as explained in an article published by the Federalist.

…to make a government job more like the ones the rest of us have will require the president and Congress to undo more than a century of misguided, anti-democratic, and unconstitutional laws governing the civil service. …the bulk of the civil service—2.8 million bureaucrats—has become a permanent class of powerbrokers, totally unaccountable to the winds of democratic change. …incompetence and corruption are the least of the problems with the modern civil service. With 95-99 percent of political donations from government employees going to Hillary Clinton in the last election, it looks less like a system of apolitical administrators and more like an arm of the Democratic Party. …Civil service protections…have created a system that grows government and advances left-wing causes regardless of who the people elect.”

Moreover, there is a structural feature of the Washington bureaucracy that gives it dangerous powers.

John Tierney’s column in the Wall Street Journal explains the problem of the “administrative state.”

What’s the greatest threat to liberty in America? …the enormous rogue beast known as the administrative state. Sometimes called the regulatory state or the deep state, it is a government within the government… Unelected bureaucrats not only write their own laws, they also interpret these laws and enforce them in their own courts with their own judges. All this is in blatant violation of the Constitution… Mr. Hamburger, 60, a constitutional scholar…says, sitting in his office at Columbia Law School… “The government can choose to…use an administrative proceeding where you don’t have the right to be heard by a real judge or a jury and you don’t have the full due process of law…” In volume and complexity, the edicts from federal agencies exceed the laws passed by Congress by orders of magnitude. “The administrative state has become the government’s predominant mode of contact with citizens,” Mr. Hamburger says. …“The framers of the Constitution were very clear about this,” Mr. Hamburger says…”Congress cannot delegate the legislative powers to an agency, just as judges cannot delegate their power to an agency.”

George Will elaborates, noting that “administrative law” is an affront to the Constitution’s principle of “rival branches.”

…the administrative state distorts the United States’ constitutional architecture…Clarence Thomas…is urging the judicial branch to limit the legislative branch’s practice of delegating its power to the executive branch. …This subject is central to today’s argument between constitutionalists and progressives. …Today, if Congress provides “a minimal degree of specificity” in the instructions it gives to the executive, the court, Thomas says, abandons “all pretense of enforcing a qualitative distinction between legislative and executive power.” …the principles Thomas has articulated “attack the very existence of the modern administrative state.” This state, so inimical to conservatism’s aspiration for government limited by a constitutional structure of rival branches. …Woodrow Wilson…became the first president to criticize America’s founding, regretted the separation of powers because he thought modern government required a clerisy of unfettered administrators. …Today we are governed by Wilson’s clerisy, but it does not deliver what is supposed to justify the overthrow of James Madison’s constitutional system—efficient, admirable government.

Although the Constitution places the federal legislative power in Congress, it is now increasingly—and alarmingly—flowing to administrative agencies that, unlike Congress, are not directly accountable to the public affected by their decisions. Unless we can find a solution to this problem—a way to curb and cabin the discretionary power of administrative agencies—decentralization and individual self-determination will eventually be brought to an end. …The framers believed that the tripartite structure of the federal government would be enough to prevent any one of the three branches from consolidating the power of government and becoming a danger to liberty. But with the growth of the administrative state, we may now be seeing exactly the consolidation of powers that Madison feared. …the judicial branch is supposed to be the final interpreter of the Constitution and thus the objective protector of the framework the Constitution ordains. But unfortunately, modern courts have generally failed to perform this role… America is an exceptional country in part because its constitutional framework has, until relatively recently, limited the government’s ability to centralize its control and restrain the nation’s diversity. If we are to avoid a dramatic over-centralization of power, the growth of the administrative state must be restrained.”

In an article for National Review, Stanley Kurtz delves into the topic.

The gist of the growing conservative critique of the administrative state…focuses on a runaway bureaucracy’s threat to constitutional government. Congress has improperly delegated much of its law-making power to bureaucrats, who in turn have abusively expanded this authority. The courts, for their part, have turned a blind eye to the administrative power-grab. Meanwhile, agencies staffed by unelected bureaucrats now operate de facto courts. In effect, these agencies negate the separation of powers by simultaneously exercising legislative, executive, and judicial functions, the very definition of authoritarian rule. …governors and state legislators can be unaware of policy end-runs imposed by federal agreements with a state’s own bureaucrats. At both the state and federal levels, then, bureaucracy has broken loose and effectively turned into a national fourth branch of government. …The Founders designed our federalist system to secure liberty by dividing and disbursing power, and by ensuring that local and state governments would remain more accountable to citizens than a distant federal government ever could. In fundamental ways, however, the modern practice of conditioning federal grants on state acceptance of federal dictates undermines the Founders’ intent. …"

Robert Gebelhoff of the Washington Post points out that this fight has major implications.

One of the legal issues that’s less often discussed is the role that the next Supreme Court justice will play in conservatives’ long-running legal fight to limit the size of the federal government. For decades, conservatives on the bench have been losing that war, giving way to a system of administrative law that is written, for the most part, by bureaucratic agencies. …it’s a really big deal. Over the past half century, agencies have exploded in size and power, so this debate really is about how much power the federal government should have. …Conservatives, fearful that bureaucracies are becoming an unchecked “fourth branch of government,” have decried agency deference. Just last month, Justice Clarence Thomas argued that the doctrine “has metastasized,” as if it were a cancer. And back in 2013, Chief Justice John Roberts warned of the “danger posed by the growing power of the administrative state…” Both Roberts and Thomas frame the issue as a threat to the separation of powers: We’re letting agencies in the executive branch dip into the powers reserved for the judicial and legislative branches. …And by allowing bureaucrats the ability to define the scope of their own jurisdiction, we let them answer questions meant to be left up to the courts. This, they argue, is at odds with the Constitution. …Conservatives fearing a powerful bureaucratic state have few legal weapons to fight it. The future of a small-government Supreme Court is bleak, and the march toward greater agency control of the law will probably continue forward.”

I’ll close with some recent polling data about the “deep state” from Monmouth University.

Here’s a question asking whether there’s a conspiratorial version of the “deep state.”

I’m not sure what to think of the answers.

I like people to be suspicious of the federal government. But I’d much prefer them to be concerned because they’re reading my daily columns, not because they think there’s a sinister plot.

I prefer the answers to this next question. Most people presumably have never heard of “administrative law” or the “administrative state,” but they do have a healthy skepticism of bureaucratic rule.

Most of the authors cited today correctly want federal judges to fix the problem by limiting the power of bureaucrats to make and enforce the law.

That would be desirable, but I’d go much further. We should eliminate almost all of the agencies, programs, and departments that clutter Washington. Then the problem of the administrative state automatically disappears.