60% of the Financial System Now Has a Bailout Guarantee

More than Half of Private Liabilities Are Backed By the Government

According to many politicians and pundits, new financial regulation adopted since 2008 means that financial crises are now less likely than before. President Barack Obama, for example, has suggested,

Wall Street Reform now allows us to crack down on some of the worst types of recklessness that brought our economy to its knees, from big banks making huge, risky bets using borrowed money, to paying executives in a way that rewarded irresponsible behavior.

financial reform is working a lot better than anyone listening to the news media would imagine. … Did reform go far enough? No. In particular, while banks are being forced to hold more capital, a key force for stability, they really should be holding much more. But Wall Street and its allies wouldn’t be screaming so loudly, and spending so much money in an effort to gut the law, if it weren’t an important step in the right direction. For all its limitations, financial reform is a success story.

Krugman is right that, other things equal, forcing banks to issue more capital should reduce the risk of of crises.

But other things have not remained equal. According to Liz Marshall, Sabrina Pellerin, and John Walter of the Richmond Federal Reserve Bank, the federal government is now protecting a much higher share of private financial sector liabilities than before the crisis: 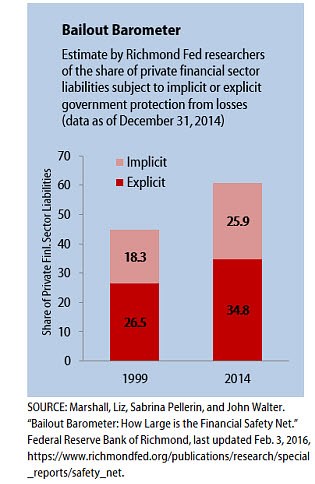 If more private liabilities are explicitly or implicitly guaranteed, private parties will at some point take even greater risks than in earlier periods. And experience from 2008 suggests that government will always bailout major financial intermediaries if risky bets turn south.

So, some of the new regulation may have reduced the risk of financial crises; but other government actions have done the opposite. Time will tell which effect dominates.

Jeffrey Miron is a Senior Lecturer and Director of Undergraduate Studies in the Department of Economics at Harvard University, as well as a senior fellow at the Cato Institute.