A close inspection of the data shows our free market system is working and has allowed us to achieve unprecedented prosperity.

Politicians are known for telling voters how bad things are. It’s a refrain that never seems to change regardless of the actual economic condition of a nation or community, and it’s practiced by those on both the political left and right.

"The average American is working longer hours for lower wages," Senator Bernie Sanders is fond of saying in stump speeches.

His congressional colleague, Rep. Alexandria Ocasio-Cortez, has gone so far as to (falsely) claim that unemployment is low only “because everyone has two jobs. Unemployment is low because people are working 60, 70, 80 hours a week and can barely feed their family."

It’s not just Democrats and Democratic Socialists, however. Sure, President Trump is touting the US economy now, but he was singing a very different tune in 2016, depicting the US as a “rusting shell of a once great economy,” as one Bloomberg writer vividly put it. The US, Trump claimed, had “a lousy” economy and “Third World” infrastructure.

Despite these bleak claims, there is ample evidence that suggests America is more prosperous than ever and US workers are experiencing the benefits. The latest evidence comes from a recent report from George Mason University’s Mercatus Center, which shows that Americans have achieved significant gains in recent decades, the result of trade liberalization and advances in technology—from the internet and smartphones to AI and robotics.

“A more open, free, and technologically advanced US economy has been a blessing to the large majority of workers and households in the United States,” writes Daniel Griswold, a senior research fellow at the Mercatus Center and co-director of its Trade and Immigration Project. “Expanding competition from trade has delivered lower prices and more product variety to consumers while shifting productive resources to those sectors that can compete more effectively in global export markets.”

Below are five key takeaways from the report.

1. Household incomes have increased nearly 20% in the last four decades

Despite a lot of talk from politicians about “stagnant wages,” household incomes in the US, adjusted for inflation, increased about 20 percent since the 1970s, up from $53,251 in 1973 to $63,179 in 2018. The stagnant wage myth stems from a tendency of economists and politicians to measure inflation using the Consumer Price Index for All Urban Consumers (CPI-U)—an index that overstates inflation and underestimates gains in purchasing power. (Griswold notes that the CPI-U’s problems were outlined nearly a quarter-century ago by the Boskin Commission.) 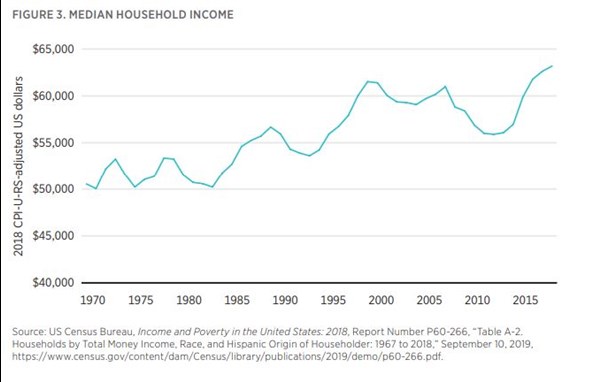 2. Hourly compensation has increased by more than 50%

A 20 percent increase is swell, but a 50 percent increase is even better—and that’s what US workers experienced between 1973 and 2018. Using the PCE deflator, which measures inflation based on personal consumption, Dartmouth economist Bruce Sacerdote found that real wages for US workers grew by 24 percent from 1975 to 2015. When benefits are included, that figure climbs to 51 percent, according to data from the Federal Reserve Bank of St. Louis.

3. Workplace deaths and injuries have plummeted by 30% and 69%, respectively

We don’t hear a lot about workplace safety these days. There’s a reason for that: it’s less of a problem than ever. Between 1991 and 2017, workplace deaths fell by 30 percent, Griswold points out. Workplace injuries and illnesses fell by 69 percent during that same timeframe. This is good news. A healthier workforce is a more prosperous workforce, and the trend for US workers is a promising one.

4. 20 million new jobs in lucrative service sectors have been created

Media and politicians tend to focus on the disappearance of manufacturing jobs in the economy, which have declined precipitously (see chart below) in recent decades as a percentage of the US workforce. However, Griswold notes that for every job lost in manufacturing since 1990, nearly eight net new jobs were added in the private sector alone, including nearly 20 million jobs in lucrative service sectors—including technical and financial services (4.73 million net jobs), construction (2.02 million net jobs), and healthcare (4.66 million net jobs). The narrative that manufacturing positions are simply being replaced by fast-food and hospitality positions is simply not true. 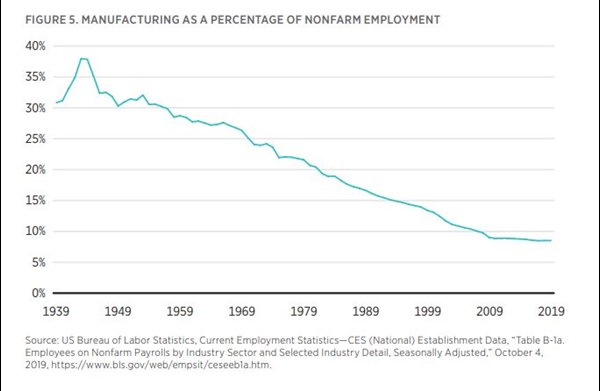 5. Americans are now spending less than one-third of their money on stuff

A basic fact of economic development is that as people become more prosperous, they spend less on material goods and more on services. That’s precisely what US workers are increasingly doing. Between 1960 and 2018, spending on services grew from 47 percent to 69 percent. Meanwhile, spending on goods dropped from 53 percent to 31 percent. With many Americans meeting their primary material needs, they have more to spend on services, whether it’s a manicure, oil change, or dinner. This is one reason Americans have slowly drifted from manufacturing work to service work, Griswold explains. 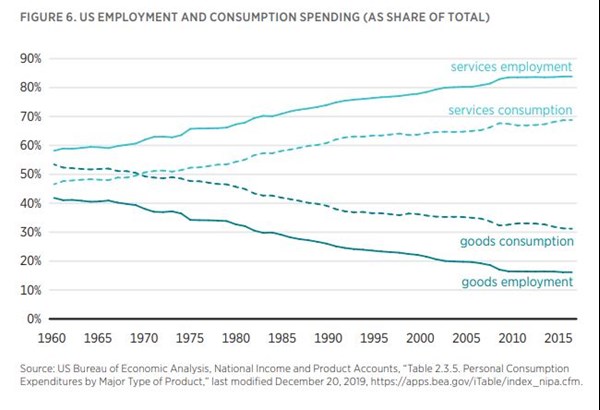 Politicians and pundits, this election cycle and the next, will tell you the economy needs to be “fixed.” That US workers are falling behind. They’ll promise to help one group of people, and pretend it will not come at the expense of another (unless it’s a group of millionaires billionaires).

The truth is politicians, particularly those of a collectivist bent, often have all sorts of plans for spending wealth, but few have knowledge of or care for how wealth is created. The source of prosperity and progress, the famed economist Ludwig von Mises observed, is market capitalism.

“The characteristic mark of economic history under capitalism is unceasing economic progress, a steady increase in the quantity of capital goods available, and a continuous trend toward an improvement in the general standard of living,” wrote Mises.

Our free market system is working and has allowed us to achieve prosperity unprecedented in human history. For that, we should all be thankful.

6 Tips on How to Ask For a Raise