5 Prohibition Laws We Still Live With

Prohibition is gone, but alcohol policy is still dominated by special-interest cronyism.

You would think that more than 80 years after the 21st Amendment repealed Prohibition, policymakers would have eliminated senseless restrictions on the sale of wine, beer, and spirits. Unfortunately, it isn’t so: state alcohol regulations carry on Prohibition’s legacy to this day.

Prohibition is gone, but alcohol policy is still dominated by special-interest cronyism.The 18th Amendment, which banned alcohol across the United States, was originally passed under the auspices of “temperance.” If defined simply as “responsible use of alcohol,” temperance is surely a good thing — as long as people have the right to make their own choices.

But rather than promoting good health or serving the interests of society as a whole, “temperance” policies benefited special interests at the expense of consumers. Today, Prohibition is gone, but alcohol policy is still dominated by special-interest cronyism masquerading as “temperance” or “public health” rules.

Many states still ban the sale of all forms of alcohol in supermarkets, and some only allow wine and beer. 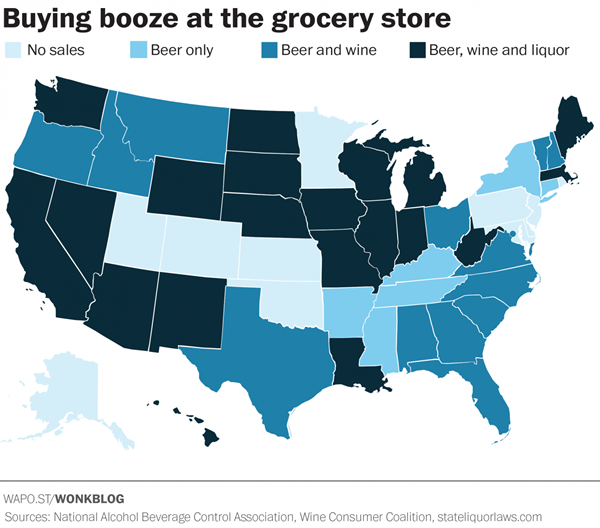 Basically, this means an extra trip for consumers thanks to anti-competitive policies designed to protect existing liquor stores that have a near monopoly on alcohol sales. The number of liquor stores is also often limited by restrictive zoning and permitting laws, further restricting competition. 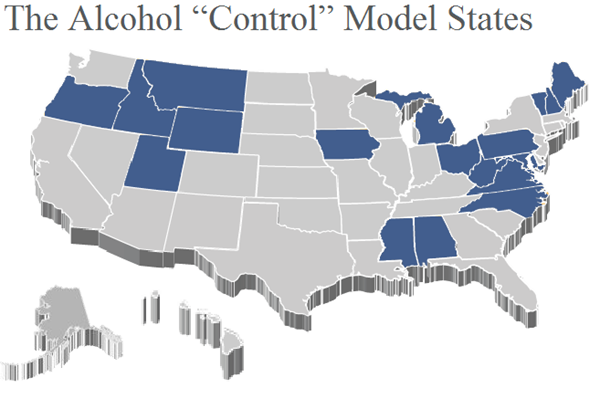 For example, in Pennsylvania, state-run alcohol stores were, until very recently, the only entity allowed to sell wine, beer, and spirits at the retail level for off-premise consumption. Fortunately, last year, for the first time since Prohibition, Pennsylvania allowed grocery stores to sell wine — but nonsensically, as in other states, consumers must still go to special government stores to purchase spirits.

Such government stores serve bureaucratic interests, selling spirits at relatively high prices without the pressure of competition. In addition, they often have the support of wine and beer industry representatives, who benefit from reduced competition. Meanwhile, consumers are inconvenienced and forced to pay higher prices with fewer choices.

In some states, consumers are not allowed to order wine, beer, or spirits directly from producers or retailers. Such shipping bans are supposedly designed to prevent underage drinking, yet that concern is addressed by the fact that only adults can sign for alcohol deliveries. In reality, shipping restrictions are driven by the interests of wholesalers, who want to force all alcohol sales to go through them.

Only five states and the District of Columbia allow direct shipping of spirits to consumers.Wholesalers maintain their position as mandated middlemen by supporting laws that enforce a three-tiered system for alcohol distribution. In these markets, producers must sell only to wholesalers, who then sell to retailers. The three-tier model can be an efficient way to get products into the marketplace — when it is voluntary. But mandatory wholesaling can prevent other competitive business models from emerging. Of course, wholesalers love these managed markets because they essentially guarantee business. But consumers suffer from limited product availability and potentially higher prices.

Fortunately, in recent years, states have become increasingly open to direct shipping of wine to consumers (although many states have arbitrary restrictions on such shipments). In 2005, the Supreme Court ruled that states must allow out-of-state wineries to ship to consumers if they allow in-state wine producers to do so, but fewer states allow wine retailers to ship across state lines.

Another set of regulations designed to advantage wholesalers are the so-called alcohol franchise laws. In Strange Brew, economist Douglas Glen Whitman explains that nearly all states have franchise laws for beer distribution, and about 20 employ such laws for wine and spirits distribution. Although the specifics vary by state, typically, these laws forbid producers from distributing their own product, even to local retailers. Instead, they are forced to hire a single wholesaler for each market territory, which may be an entire city, county, or state. And once producers contract with a wholesaler, it’s nearly impossible to terminate the contract, even when the wholesaler does a lousy job.

Winemakers, craft distillers, or brewers who can’t find a wholesaler to sell their brand are essentially locked out of these markets. Wholesalers benefit from reduced competition, while consumers bear the costs associated with reduced choice and potentially higher prices.

Many states limit or totally prohibit alcohol sales on Sunday. Who could benefit from these laws? Believe it or not, some existing retailers support Sunday bans because they don’t want to open on Sunday and don’t want the competition to have that option. 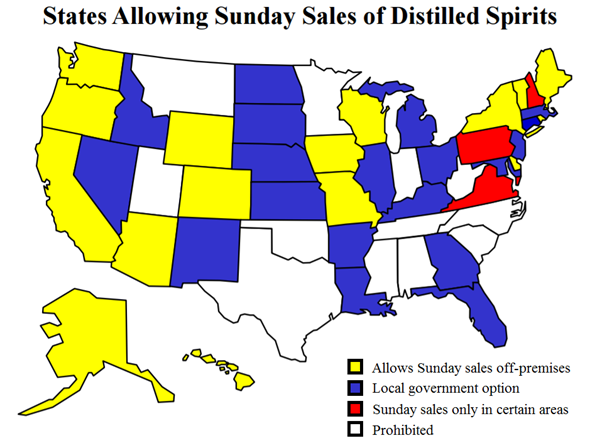 One can understand how these policies stay in place because of entrenched interests. But what’s really amazing is the many other absurd vestiges of the temperance movement that remain in place today.

For example, while there are no fully “dry states,” where alcohol is completely banned — Mississippi was the last state to repeal statewide prohibition in 1966 — there are a number of U.S. counties that continue prohibition to this day. 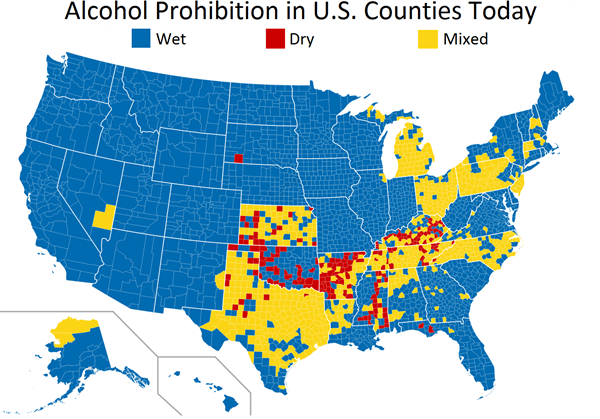 In Utah, it’s illegal to mingle in a crowd of people while drinking a glass of eggnog containing a tiny bit of alcohol at a restaurant-hosted holiday party. Why? Because Utah law demands that restaurant patrons may only consume alcohol while seated at a table or counter or standing next to a bar.

In Virginia, happy hour is less happy thanks to a host of odd regulations. For example, restaurants may not offer two-for-one drink special, they may not advertise specials by type of drink, and no drink specials are permitted between 9 p.m. and 2 a.m.

In Indiana, it is illegal to sell chilled alcohol in a retail store, so forget picking up a cold beer or wine to take home for a Super Bowl party. You’ll just have to plan ahead.

More than eight decades after the repeal of Prohibition, we’ve made some progress in enhancing consumer freedom, but much remains to be done. Hopefully, it won’t take another 80-plus years for common sense to prevail on these policies, too.

Angela Logomasini is a senior fellow at the Competitive Enterprise Institute. Logomasini specializes in environmental risk, regulation and consumer freedom.