Student debt may or may not be a national crisis, but it certainly is a personal crisis for millions of Americans.

In 2015 The New York Times profiled Liz Kelley, a Missouri teacher and mother of four who owed the federal government $410,000 (and counting) in student loans.

Kelley’s borrowing was not as remarkable as one might think—most of the debt was interest, not principal. Nor was her situation that unique. At the time, nearly two percent of Americans, some 779,00 people, owed more than $150,000 in loan debt.

By now, we’ve all seen stories like Kelley’s. What was most interesting was the confession from the Times about who the villain of the story was.

The student loan crisis, the Times said, was the result of the federal government’s student loan program, which

has been removed from the norms and values of prudent lending. Because the Department of Education doesn’t consider risk, it takes no responsibility. If life, luck and bad choices leave you $410,000 in the hole, it’s all on you.

As a result, the federal government had become “a heartless loan collector.” You think men with brass knuckles are tough? Wait until you have to tangle with the IRS.

Like many things in life, the student debt explosion is largely a story of incentives, good and bad. To help readers understand these incentives, we’ve created a handful of charts that tell the student loan story. 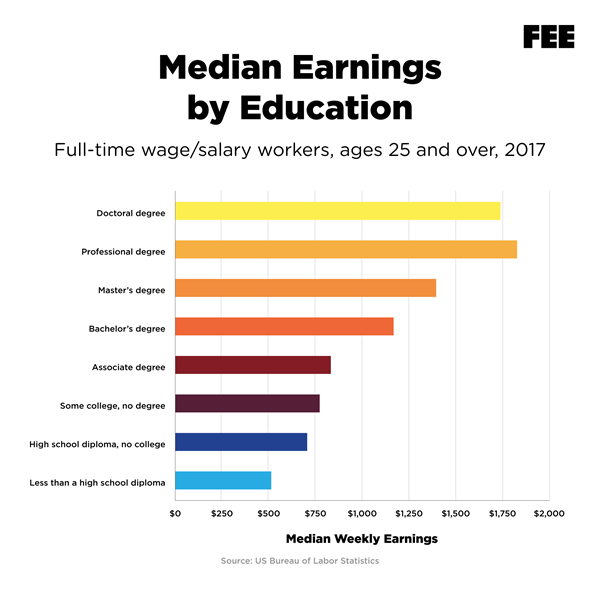 There currently are an estimated 23 million students enrolled in US colleges and universities (19 million undergrads, and 4 million in professional and grad school). If college is simply a path to debt and servitude, this statistic wouldn’t make much sense. A great many still value a college degree, although that value has been questioned more in recent years.

Median weekly earnings of US workers tend to rise based on their education level. While it’s true that some college dropouts like Mark Zuckerberg and Bill Gates became incredibly wealthy, and some PhDs and lawyers serve coffee, on average Americans without college degrees make less than Americans with degrees. While that higher pay is not necessarily attributable to the degree, most people think it is, and that drives most of the demand for higher education.

Whether college is actually a sound financial investment depends on numerous variables, however, such as career path, degree program, academic institution, skills offered, etc. Yet the near-universal perception that college is the path to prosperity, combined with accessible federal dollars and effective mass marketing by universities, incentivizes Americans like Liz Kelly to pursue degree programs, even if they may be poorly suited for college or pursue degrees that do not significantly enhance their job skills or marketability.

#2 Prices Are Too D*mn High 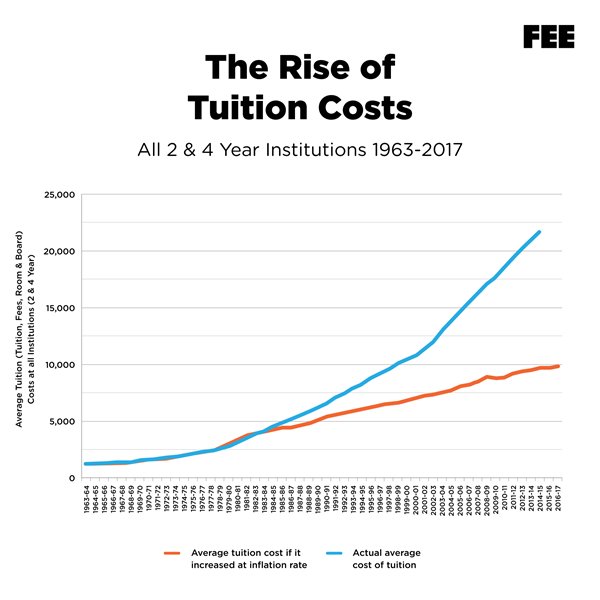 While college degrees have value, earning them has become much more expensive. According to the US Department of Education in the 1965-66 school year the average cost of a four-year degree was $607. For a two-year degree, it was even less: $203. (Both figures exclude room and board.)

As Bernie Sanders tweeted last year, the cost of education, in nominal dollars, has increased by roughly 3,800 percent since the mid 1960s. What Sanders didn’t mention was that this was when the US Higher Education Act was passed, which directed taxpayer dollars to low-interest loans for students pursuing college. This increased accessibility to higher education, but the flood of federal money also caused a surge in demand and costs.

The chart above tracks the increase in the cost of college since the 1960s.

#3 College Costs Rising Faster Than Just about Anything 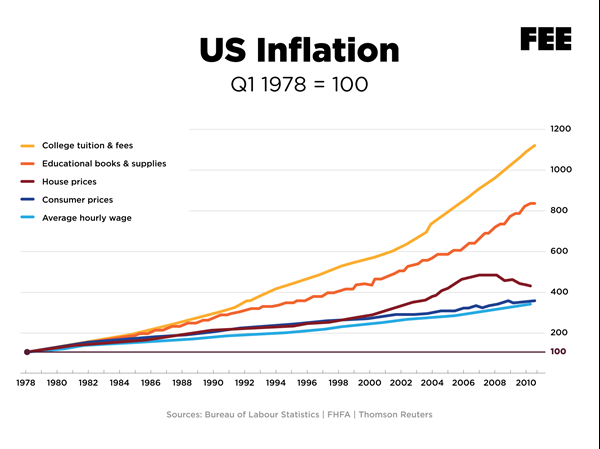 It’s not pretty. Turns out if you offer 18-year-olds tens of thousands of dollars with few strings attached to attend university instead of, say, roofing houses, joining the Army, or flipping burgers, you’ll artificially create a surge of demand (and some bad incentives). 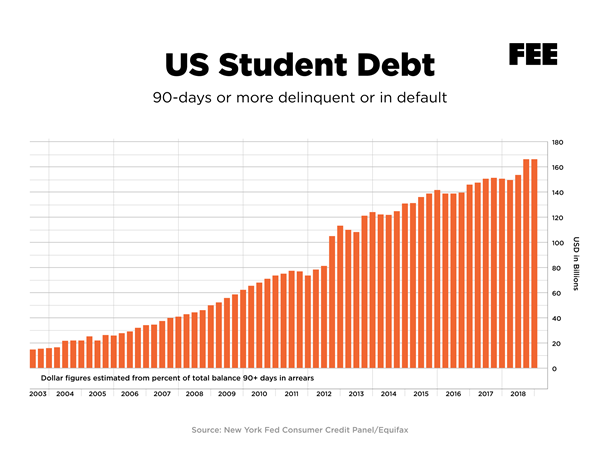 As the Times’ profile story of Liz Kelley shows, the federal government doesn’t use standard loan practices. Freed “from the norms and values of prudent lending,” as the Times politely puts it, the federal government began to lend hundreds of billions of dollars to students without assessing the risk of those loans. Universities, meanwhile, were operating under their own incentives. Eager to enroll more students to tap the well of federal dollars and facing no consequences when students default, universities began to lower academic standards to increase their enrollments.

#5) The Feds Own Almost All Student Debt

The federal government’s loan program began small, but that changed in the 1990s when the Department of Education began lending directly to students en masse. This caused the federal government's portfolio to balloon. Today, roughly 90 percent of student loans are issued by the US Department of Education. These federally guaranteed loans account for roughly $1.3 trillion of that $1.6 trillion debt.

Unlike other types of debt, student debt cannot be expunged through bankruptcy. (Well, almost never.) That means students are stuck with these loans for good, even if they are one of the 40 percent who simply drop out.

As the Times story showed, the federal government doesn’t really care how that student debt was accrued or if you received a degree. They just want to get paid.

Student debt may or may not be a national crisis, but it certainly is a personal crisis for millions of Americans. This is particularly true for millennials, many of whom are foregoing purchasing homes, getting married, and starting businesses because of student loan debt.

The problem isn’t unsolvable, but it will require significant changes to universities and the federal loan program. “Free” tuition and student debt forgiveness will only make the problem worse.

Instead, as University of Maryland economist Peter Morici recently argued, market discipline must be brought back to our institutions of higher learning as part of any debt forgiveness.

While policy wonks offer no shortage of proposals for tweaking the federal loan program to improve it, perhaps the best solution would be to get the federal government out of the loan business all together.