No good deed goes unpunished in the Land of the Free.

Every year the number of regulations, dictates, rules, decrees, guidelines, statutes, laws, and bylaws in the United States grows by leaps and bounds. Just look at the growth in the number of final rules contained in the Federal Register: 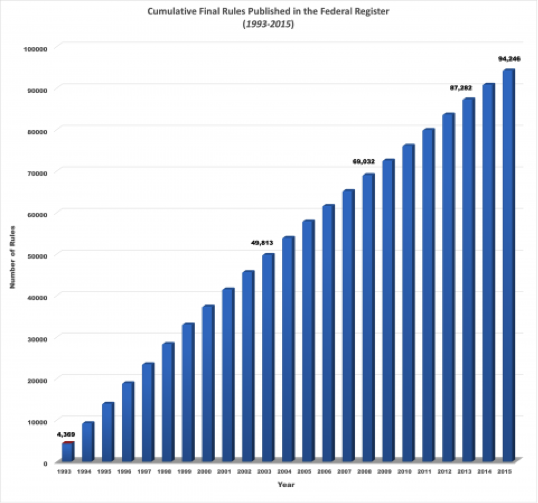 Now it seems we can’t go a week without hearing a new story about someone being punished, with fines or even jail time, for activities that would be encouraged in a free society. I’ve taken the liberty (pun intended) of compiling some of the more egregious examples of this trend for your reading pleasure (or displeasure).

1. Single mom faces possible jail time for selling $12 worth of ceviche to an undercover police officer.

Mariza Ruelas had her day in court in early November. Her crime? She sold a $12 plate of ceviche, an authentic Mexican dish, to an undercover cop on Facebook.

I know what you’re thinking: Why are police setting up stings to catch people selling food to willing customers over Facebook? Don’t they have actual crimes to investigate — like ones with actual victims? I wish I knew the answers to those questions.

On January 11th 2013, Aaron Swartz ended his own life, concluding one of the biggest miscarriages of justice in contemporary history.

In the months leading up to his suicide, Swartz had been embroiled in a legal battle with the federal government after prosecutors charged Swartz under the draconian Computer Fraud and Abuse Act. His crime? Downloading thousands of academic articles from the JSTOR database.

The CFAA is a particularly cruel piece of legislation, as it carries severe mandatory minimum sentencing requirements, resulting in Swartz facing up to 35 years in prison for a nonviolent crime.

Many legal observers at the time pointed out that had Swartz robbed a bank, aided al-Qaeda, or produced child pornography he would have faced a more lenient sentence.

Swartz’s story was detailed in great depth in the documentary The Internet’s Own Boy. The documentary was released under the Creative Commons — a nonprofit initiative Aaron Swartz himself was an early architect of — so you can watch it for free on YouTube.

3. Government claims ownership of all water, jails Oregon man for 30 days for collecting rainwater on his own property.

Way back in 2012 the libertarian blogosphere was abuzz over an egregious case of local government tyranny out of Oregon. Gary Harrington was sentenced to spend 30 days in jail for the crime of collecting rainwater using three reservoirs (that’s newspeak for “ponds”) on his property.

Oregon law states that all water is a public resource, to be owned communally by the collective population of Oregon, and as such any attempts to obtain or store water must first begin with applying for the proper permits to do so. Yes, really.

One of the reservoirs on his property had been there for 37 years, Harrington said. To add insult to injury, Harrington’s applications for permits were initially approved by the state’s Water Resource Department, but were rescinded after a state court reversed their decision.

As a result of this 1920s-era law, Harrington was ordered to turn himself in to the county jail to serve his 30-day sentence.

4. Maryland church ordered to evict homeless people from its property or pay a $12,000 fine.

The church wasn’t even letting the homeless sleep indoors, rather they were just allowing a few homeless people to sleep on some of the benches located in the church’s yard.

In early 2015, the chef and founder of the not-for-profit food truck Chow Train, Joan Cheever, was cited by police officers for the outrageous crime of serving hot meals to the city’s homeless population.

The citation, which she received for transporting the food in a different vehicle than her licensed food truck, carries with it a fine totaling $2,000.

As is par for the course in these sorts of cases, there isn’t an observable wronged party. The only apparent “crime” here is the violation, unwitting or otherwise, of an arbitrary government dictate. In this case in particular, no one called the police requesting assistance. Cheever was doing what she had done for more than 10 years, except this time her charity stepped outside of the parameters set forth by an unelected bureaucrat at the city’s health department.

These cases brought to light a troubling trend unfolding in the US that couldn’t be summarized better than by the indispensable words of Ayn Rand, writing in Atlas Shrugged,

Hopefully the tendency to criminalize mundane activities or even charitable giving itself can be arrested before anyone else finds themselves on the business end of the growing regulatory state.

Kelly Wright is an Online Programs Coordinator at the Institute for Humane Studies.