4 Ways the Fight against Inequality Backfires

Policies might be aimed at the rich, but the poor tend to suffer the most damage.

The left’s fixation on reducing inequality is misguided. If they really care about the poor, they should focus on reducing poverty instead.

That means pushing for more growth. We know from US and global evidence that better economic performance is the effective way to 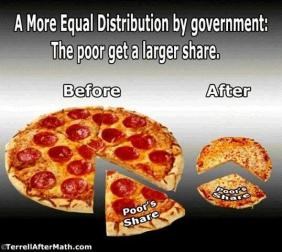 boost living standards for the less fortunate (I also recommend a look at the data from China).

Unfortunately, many folks on the left pursue policies that undermine prosperity and actually exacerbate inequality. I put together some examples back in 2015, and now it’s time to expand that list.

A report from the left-leaning Brookings Institution looks at how regulations protect – and enrich – the top 1 percent.

The real cause of elite inequality is the lack of open access and market competition in elite investment and labor markets. To bring the elite down to size, we need to make them compete. …people working in the securities industry (which includes investment banks and hedge funds) earn 26 percent more, regardless of skil. Those working in legal services get a 23 percent pay raise. These are among the two industries with the highest levels of “gratuitous pay” — pay in excess of skill… Using microdata from the Census Bureau, I find that the “gratuitous pay” premium in certain industries has increased dramatically since 1980. …The accredited investor…rules contribute to inequality by giving the richest investors privileged access to the best investment strategies. …If the law was changed to allow mutual funds to offer hedge fund portfolios, hundreds of billions of dollars would be transferred annually from super-rich hedge fund managers and investment bankers to ordinary investors, and even low-income workers with retirement plans. …politicians and intellectuals often champion market competition — but what they mean by that is competition among low-paid service workers, production workers, or computer programmers who face competition from trade and immigration, while elite professionals sit behind a protectionist wall. …For lawyers, doctors, and dentists — three of the most over-represented occupations in the top 1 percent — state-level lobbying from professional associations has blocked efforts to expand the supply of qualified workers who could do many of the “professional” job tasks for less pay.

Matt Ridley, a columnist for the U.K.-based Times, writes about the pernicious impact of cronyism, licensing, and industrial policy.

The history of industrial strategies is littered with attempts to pick winners that ended up picking losers. Worse, it is government intervention, not laissez faire, that has done most to increase inequality and to entrench wealth and privilege. For example, the planning system restricts the supply of land for housebuilding, raising property prices to the enormous benefit of the haves (yes, that includes me) at the expense of the have-nots. …Why are salaries so high in financial services? Because there are huge barriers to entry erected by government, which hands incumbent firms enormous quasi-monopoly advantages and thereby shelters them from upstart competition. …Why are lawyers so rich? Because there is a government-licensed cartel restricting the supply of them. …Our current “industrial strategy” for energy — to subsidise offshore wind, solar, biomass and nuclear — is responsible for the fact that domestic electricity prices are the seventh highest… Domestic electricity bills are a higher proportion of household budgets for the poor than for the rich, so this policy is regressive; doubly so, because the wind and solar subsidies mostly go to the rich.

Let’s consider health policy. Folks on the left favor the healthcare exclusion in the tax code because government supposedly should play a role in encouraging health insurance. What’s the impact of this policy? Well, let’s peruse a Robert Samuelson column on health policy and inequality, which is based on a study from the Mercatus Center.

…add health care to the causes of growing wage inequality in America. There’s a largely unknown paradox at work. Companies that try to provide roughly equal health insurance plans for their workers — as many do — end up making wage and salary inequality worse …It’s simple arithmetic… Paying for expensive health insurance squeezes what’s left for wage and salary raises. Economic inequality increases, because health insurance typically represents a larger share of total compensation for lower-paid than higher-paid workers. Their wages are squeezed the most. …Even though the company raised its compensation package by 5 percent for all workers, the wage and salary gap between the best- and worst- paid workers widened. Pursuing one type of equality (health coverage) inadvertently worsened another type of inequality (wages and incomes). …From 1992 to 2010, about half the increase in wage and salary inequality is explained by rising health costs.

We’ll close with a new study by an economist at the University of Michigan for the National Bureau of Economic Research.

Here’s a chart from Professor Troiano’s research. Note how the rich got richer at the point (“0”) the income tax was implemented. 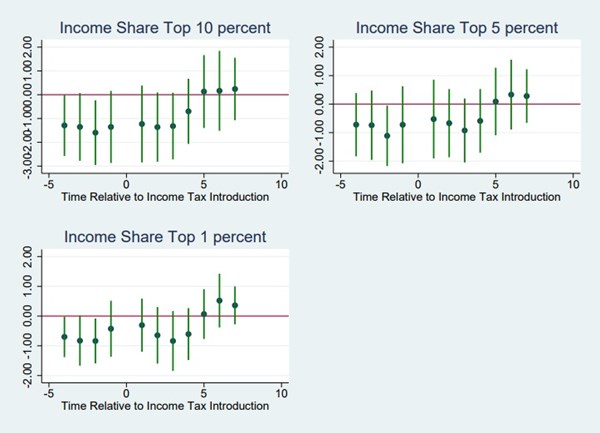 And here’s a look at what happened to various measures of inequality. Again, pay attention to the point (“0”) where the income tax was imposed. 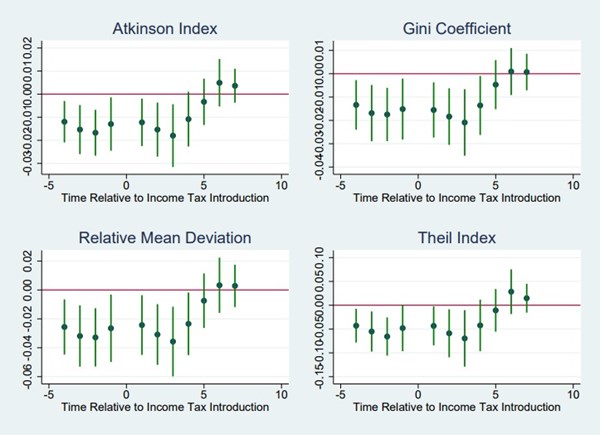 Writing for PJ Media, Simon Constable discusses some implications of the NBER report.

Income taxes don’t reduce income inequality. Instead they do quite the opposite, according to a December-dated analysis published by the National Bureau of Economic Research. The paper looked at three major 20th century US tax reforms and found that they did nothing to decrease income inequality and everything to increase it …Why did income inequality increase when that wasn’t the goal of the reforms? …bigger government ends up retarding the private sector and reducing the size of the wealth pie. Naturally, the poorer come out worst in such a situation, while the well-heeled can get top tier advice to dodge the tax bullet. Hence, the rich get richer and the poor stay skint. …Nobody who believes in liberty, or public choice theory, will be surprised to learn that higher taxes lead to more inequality,” says Robert E. Wright, professor of political economy at Augustana University in South Dakota. The problem is that the elites in any society, including the US, control the government and they quite naturally take care of themselves first, he says.

The bottom line is that our statist friends claim that they’re shooting at the rich, but the poor tend to suffer the most damage.

If you want more evidence, look at what happened to income for various groups during the pro-free market era of the 1980s and 1990s compared to what’s happened so far this century.

P.S. The most twisted look at inequality was produced by the IMF, which implied that radically lower living standards would be acceptable if everyone was more equally poor.

P.P.S. The most satirical look at inequality comes from David Azerrad.

P.P.P.S. The most insightful comment on inequality comes from Johan Norberg, who reminds us that we should be upset by unfairness, not inequality.