#34 – “Government Must Subsidize the Arts”

#34 – “Government Must Subsidize the Arts”

People who oppose Soviet-style collective farms, government subsidies to agriculture, or public ownership of grocery stores because they want the provision of food to be a private matter in the marketplace are generally not dismissed as uncivilized or uncaring. Hardly anyone would claim that one who holds such views is opposed to breakfast, lunch, and dinner. But people who oppose government funding of the arts are frequently accused of being heartless or uncultured. What follows is an adaptation of a letter I once wrote to a noted arts administrator who accused me of those very things. It articulates the case that art, like food, should rely on private, voluntary provision.

Thanks for sending me your thoughts lamenting cuts in arts funding by state and federal governments. In my mind, however, the fact that the arts are wildly buffeted by political winds is actually a powerful case against government funding. I’ve always believed that art is too important to depend on politics, too critical to be undermined by politicization. Furthermore, expecting government to pay the bill for it is a cop-out, a serious erosion of personal responsibility and respect for private property.

Those “studies” that purport to show X return on Y amount of government investment in the arts are generally a laughingstock among economists. The numbers are often cooked and are almost never put alongside competing uses of public money for comparison. Moreover, a purely dollars-and-cents return—even if accurate—is a small part of the total picture.

The fact is, virtually every interest group with a claim on the treasury argues that spending for its projects produces some magical “multiplier” effect. Routing other people’s money through the government alchemy machine is supposed to somehow magnify national wealth and income, while leaving it in the pockets of those who earned it is somehow a drag. Assuming for a moment that such preposterous claims are correct, wouldn’t it make sense from a purely material perspective to calculate the “average” multiplier and then route all income through the government? Don’t they do something like that in Cuba and North Korea? What happened to the multiplier in those places? It looks to me that somewhere along the way it became a divisor.

What if, for instance, “public investment” simply displaces a certain amount of private investment? (Arts subsidy advocates never raise this issue, but I know that I personally am far less likely to make a charitable contribution to something I know is on the dole than to something I know rests on the good hearts of willing givers).

What if “public investment” brings with it some baggage like political manipulation that over time erodes the integrity of the recipient institutions? How does that fit into the equation?

What if I, as a taxpayer who earned the dollars in the first place, could keep what the government would otherwise spend on the arts and invest it in my child’s education and end up getting twice the return on my money that the government would ever get on the arts? The fact that you take so much from me now, by the way, means that I can purchase less of the things that I value, including such things as tickets to the theatre or a concert.

If simply getting a good return qualifies an activity for public investment and government involvement, then I can think of hundreds of companies and industries that government “should” have spent tax money on—from silicon chips to Berkshire Hathaway. The Constitution’s framers could have dispensed with all that rigmarole about rights of citizens and duties of government and stopped with a preamble that said only, “We the People, in order to get a high return on our tax money, establish this government to do whatever anybody can show will fetch a hefty payback.”

Sometimes those of us who put faith in such things as the individual, private property, and the marketplace are accused of focusing solely on dollars and cents. But actually, it’s those on the other side who are most guilty of this. The arts funding issue is a case in point. Advocates of government funding focus on dollars—more of them, always more of them—and no matter how much government funding of the arts we have, it’s never enough.

Those of us who wish to nurture the arts privately stress other, far more important values. I believe, for example, that money which comes voluntarily from the heart is much more meaningful than money that comes at gunpoint (which is ultimately what taxes are all about). You’ve won so much more when you convince people to do the right thing, or support the right causes, because they want to instead of because they have to. For that reason I don’t believe in shotgun marriages either.

I can think of an endless list of desirable, enriching things, very few of which carry a tag that says, “Must be provided by taxes and politicians.” A rich culture consists, as you know, of so many good things that have nothing to do with government, and thank God they don’t. We should seek to nurture those things privately and voluntarily because “private” and “voluntary” are key indicators that people believe in them.

The surest way I know to sap the vitality of almost any worthwhile endeavor is to send a message that says, “You can slack off; the government will now do it.” That sort of flight from responsibility, frankly, is at the source of many societal ills today: Many people don’t take care of their parents in their old age because a federal program will do it. Most parents these days shirk their duties to educate their kids because government schools are supposed to do that (even though many of them do a miserable and expensive job of it).

I know that art is just about everything to some people, especially those whose living derives from it. But as adults we have to resist the temptation to think that what we are individually doing is somehow the greatest thing since sliced bread and that therefore it must receive more than what people willingly give it.

I think what my church does is important, but I don’t want government giving it money. I think what we do at FEE is important, but we’d go out of business before we’d take a nickel of somebody’s money against his will. I might even like certain nongovernment-funded art forms more than the ones that are politically well connected enough to get a grant, but I don’t want to corrupt them with a government check. As children we want what we want and we want it now, and we don’t care where it comes from or even if somebody has to be robbed for us to get it. But as discerning adults who put a higher premium on mutual respect and building a culture that rests on creativity and persuasion over coercion, we should have different standards.

If we do not rob Peter the worker to pay Paul the artist, perhaps Paul may have to become a better artist or a better marketer of his art, or perhaps take on another profession entirely. Would that mean that we’ve deprived Paul of his freedom? Hardly. In a free society, Paul is always free to pursue art as either a hobby or a profession. But the same could be said of Peter, who has every right to pursue his interests too, without having his freedom diminished through taxes so that Paul’s interests can be made more lucrative.

Moreover, haven’t we learned from endless, painful experiences that when you inject government money into something, you introduce politics and conflict, demagoguery and vote-buying, waste and inefficiency? Why politicize something as spontaneous and beautiful as good art? Why subsidize bad art?

Lots of things are important in life. That doesn’t mean they all need to be coercively financed. Art in its endless forms enjoys the support of nearly every human, in varying degrees (I’ve been in hundreds of homes and none with bare walls and no music-playing device). Claiming that the arts require the force of government is, if not self-serving, a flimsy and foolhardy assertion.

“Who Should Support the Arts?” by Melvin D. Barger: http://tinyurl.com/kw5cu8r

“A Train Wreck You Can’t Look Away From” by Bruce Edward Walker: http://tinyurl.com/nfq2rre

“The Arts in a Free Market Economy” by Tyler Cowen: http://tinyurl.com/olqxm8y

“Subsidies to the Arts: Cultivating Mediocrity” by Bill Kaufmann: http://tinyurl.com/m6zrb4e 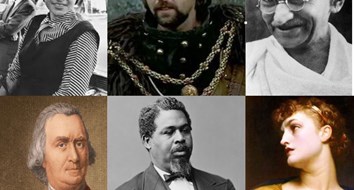