3 Charts on the "Disappearing" Middle Class

Good tidings of great joy, which shall be to most US households

Pew has been making headlines with its recent study [PDF] on US income distributions, alarmingly titled "The American Middle Class Is Losing Ground."

Bemoaning the fate of the middle class is the favorite pastime of the political class, but Pew (and a chorus of commentators) missed the mark here.

Here's how Pew portrays the fate of the middle class: 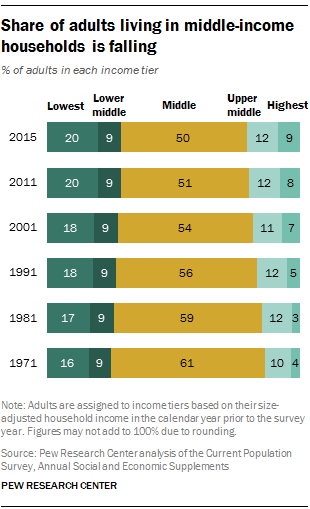 This is all based on relative position — on the distance your household is from the median — not on absolute income. But even here you can see that, of the 11 percent who left the middle, most (7 percent) moved up, not down. That's not "losing ground."

When you look at actual incomes, rather than relative positions, you see how completely false this claim really is. Mark Perry crunched the Census data on family incomes, and it shows that the old middle is disappearing up:

The Financial Times animated this process with Pew's data to show both relative and absolute incomes over time. Watch as the middle shifts to the right — it quite literally gains ground!

Most households got richer, not poorer, and the distribution is even flatter in 2015 than the halcyon days of 1971.

Hat tip to the indispensable Don Boudreaux at Cafe Hayek and to Mark Perry at AEI.