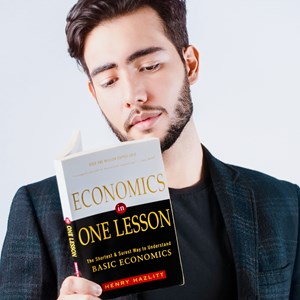 Arturo has a BA in Economics and Political Science. He was National Director of Students for Liberty from 2017 to 2019 and received for 3 consecutive years the recognition as one of the best leaders of the network. Director of International Programs EsLibertad from 2019 to 2020 and Program Associate of Caminos de la Libertad. He is a fellow of the Naumann Foundation, Cato Institute and Atlas Network.

He has been a speaker at over 150 conferences. He specializes in Microeconomics, Macroeconomics, Fiscal and Monetary Policy.

Is a collaborator of projects and research programs for several liberal organizations in Latin America. In 2018 he started his journey at FEE through the FEE Campus Rep program and obtained the Bettina Greaves Memorial recognition for achieving the most significant impact during the 2018-2019 academic year.

Arturo is passionate about the ideas of freedom, and his main goal is to build platforms that promote free-market in Latin America and promote FEE's initiative "FEE en Español."

Leonard Read was one of his early influences in libertarian thought, thanks to this he has offered several conferences, workshops and forums related to economic education and the principles of a free society.