Would Money For Nothing Make Us Happy and Free?

There may come a day, perhaps soon, when robots take our jobs. All of them. For the consensus view, the question is not if, but of how many jobs, and how soon. Familiar ways of life will fade as entire occupations — lawyer, doctor, pilot — disappear altogether. “Even in a benign situation,” Elon Musk recently said at the Code Conference, “we will become like a house cat.” Not the end of the world for us, exactly — fed, pet, let in and out, litter box cleaned — but we wouldn’t really contribute much value to the world either.

We don’t have to go to the Great Age of the Pink Slip before confronting other vexing problems. Since the early 1970s, we have seen growth in wages decouple from the growth of the economy as a whole. It used to be that as the pie got bigger, so did everyone’s slices. Recent history has not been so equitable: same old crusts for some, but more and more fruity filling for the fattest. 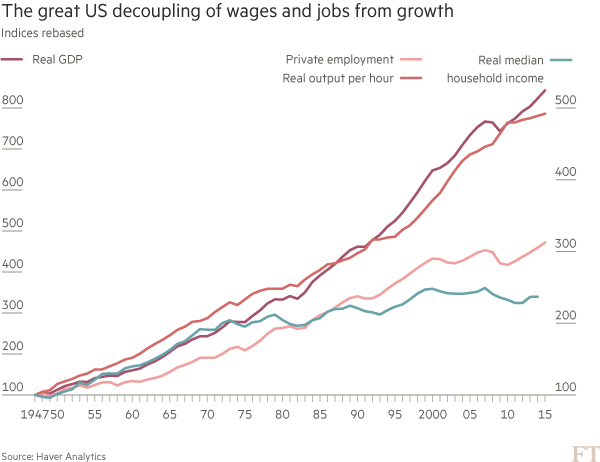 Thus some venture capitalists have turned into venture socialists. They hope the Age of the Pink Slip coincides with the Age of Abundance. While robots may put everyone out of work, nations will grow so rich that they can pay every citizen to do nothing more than live out Karl Marx’s dream of fishing in the afternoon and criticizing poetry at night. Concerned, the president of YCombinator, Sam Altman, is starting a research program to look into the issue. The startup accelerator plans to run a pilot test guaranteeing income to a small set of people in Oakland. Altman hopes the money will “give people the freedom to pursue further education or training, find or create a better job, and plan for the future.”

Opposed on other issues, a chorus of scholars and authors, both left and right, have now gathered on a hill as in a Coke commercial to sing the joy of a universal basic income, or UBI for short. Erik Brynjolfsson, a prof at MIT and author of The Second Machine Age, foretells the coming of a “digital Athens” where we will be free to debate philosophy and practice painting because industrious robots will make everything we roustabouts would ever need. Charles Murray, the libertarian social scientist, wrote in the Wall Street Journal that a UBI would lead to a rebirth of civic virtue, a “restoration, on an unprecedented scale, of a great American tradition of voluntary efforts to meet human needs.”

And on the left, a progressive Dutch author, Rutger Bregman, has written a bestseller in the Netherlands that is now gaining popularity around the world —  Utopia for Realists. The book calls for a UBI, open borders, and a 15-hour workweek. The Finnish government — just to see what happens — is testing a pilot program in which a randomly chosen 10,000 adults will get 550 tax free Euros per month for two years.

So these are the cards on the table. Is this an idea whose time has come in America? If robots do everything better than we can, will a weekly Venmo payment through the government provide sufficient consolation?

I don’t think so for a few reasons, which I’ll sketch here before moving on to the bigger difficulty. In short, it would bankrupt the country. We are not rich enough yet. Second, it would be very hard to get from here to there without dragging along many of the poorly designed, complex programs a simple UBI is designed to replace. The idea also raises troubling questions about immigration, nation states, and who would receive the benefits of citizenship. The stronger the social services, the more fearful nations become about sharing it with strangers and newcomers.

But I want to leave aside alternatives and feasibility counterarguments, and instead focus on one of UBI’s weaknesses in particular: handing out money for nothing will make few happier and will stunt human flourishing. Many proponents, particularly the futurists, make erroneous assumptions about what makes people happy. The truth is many people prefer work to leisure, even if they have money. They don’t want to be well-kept house cats or children on generous allowances. Replacing meaningful work with checks for all will bore a gaping hole where many find purpose and have fun.

What is the evidence? It starts with indirect, but similar ideas. Let’s get wonky.

Ruut Veenhoven, a prominent Dutch sociologist, has looked into comparing how people feel about their lives across different social systems. “Contrary to expectation,” he writes, “there appears to be no link between the size of the welfare state and the level of well‐being within it. In countries with generous social security schemes, people are not healthier or happier than in equally affluent countries where the state is less open‐handed.”

What about people who get lots of money from the government and none of the stigma of being on welfare?“If he hadn’t won, he would have worked like regular people and maybe had 20 years left. But when you put that money in the hands of somebody with problems, it just helps them kill themselves.”

A classic, admittedly old, 1978 study in social psychology surveyed three groups — lottery winners, a control group, and paralyzed accident victims — on how they felt about their lives. Survey says! The lottery winners weren’t any happier than the control group. The surveys also revealed that the lottery winners didn’t appreciate the small pleasures in their day-to-day life as much as the quadriplegics and paraplegics did. And while their overall happiness was higher compared to the accident victims, it was not by a whole lot. (A 2008 Dutch study arrived at similar findings.) Manna from heaven — given, but unearned — does not lead to fulfillment.

Much more anecdotally, we arrive at P. Diddy’s profound truth, “Mo’ money, mo’ problems.” Winning the lottery can accelerate downward spirals. A forklift operator named Mark Metcalf won $34 million in the Kentucky lottery in 2000. He had to split half of it with his estranged wife. He quit his job, bought a 43-acre estate, enjoyed his leisure, collected vintage cars, and rounded up some horses. Within three years both he and his estranged wife were dead from complications due to alcoholism and drugs. Metcalf’s first wife told a New York Times reporter , “If he hadn’t won, he would have worked like regular people and maybe had 20 years left. But when you put that money in the hands of somebody with problems, it just helps them kill themselves.”

This sort of story has become its own genre, even with listicles — “Nineteen Lottery Winners Who Blew It All." And one study found that winning the lottery does not make the lucky ones or their children healthier.

By and large, however, these tailspins are rare for lottery winners who have well-paying careers. Winning for these folks means doing more of what they love — they work. A 2004 study found that 85.5 percent Americans continued to work after winning, many in the same jobs; a 2009 study found 62 percent of Swedish winners continued to work. It would not be better if robots took their jobs while they received checks and leisure, since we know their preference now, even when they expect a torrent of guaranteed income.

Admittedly, lottery winnings represent more money than the typical basic income proposal suggests. And sometimes winners take a lump sum instead of a twenty year payment plan. But how can more be worse? It would be strange if people grew happier receiving a little but not a lot. The hedonic treadmill keeps us running.

Since 1950, the American economy has grown quite a bit. Now, sure, we didn’t start the fire, but we are much, much richer than we used to be. And yet! The number of hours worked per person since then has risen. This presents a puzzle: why haven’t technological progress and economic growth lowered the number of hours worked per week? The economist John Maynard Keynes wrote an essay in 1931 forecasting the century ahead. It was called “Economic Possibilities for Our Grandchildren.” In the depths of the Great Depression, he wrote that technology was advancing so fast that, due to automation, by now we — his grandchildren — would have a fifteen-hour work week and in our off-time we could finally confront the “permanent problem” of how to use our freedom and spend our leisure.Money for nothing threatens us by systematically leveling our purpose. People may not starve, but they will feel useless.

But Keynes was wildly wrong. Despite getting richer and having more labor-saving devices, we don’t work any less than we did in 1950. Much like today’s UBI proponents, Keynes envisioned a future in which we would live the life of a Cambridge Don, debating philosophy over a pint and punting on the River Cam. But the opposite has come to pass, especially for the top one percent of earners. Contrary to Keynes’ expectations, at higher and higher wages, people don’t work fewer hours; they work more. “One of the big lessons in economic data,” economist Tyler Cowen says in a recent lecture, “is that people really like work.”

Consider zoo animals who fear neither hunger nor violent predators: many have shorter life expectancies than their friends in the wild. Perhaps this is why Musk isn’t satisfied with being a house cat.

People need stimulating experiences. They need to feel engaged and the stakes have to be real. They need to exercise their bodies and minds in challenging tasks that make a significant difference to something larger than themselves, something valuable. This, it seems, is to be fully human. Venmo payments alone will not suffice. The Viennese psychiatrist Victor Frankl wrote about how he survived a Nazi concentration camp in his memoir, Man’s Search for Meaning. It wasn’t a stoic quietism that helped him survive. It was meaningful work:

“On the fourth day in the sick quarters I had just been detailed to the night shift when the chief doctor rushed in and asked me to volunteer for medical duties in another camp containing typhus patients. Against the urgent advice of my friends (and despite the fact that almost none of my colleagues offered their services), I decided to volunteer. I knew that in a working party I would die in a short time. But if I had to die there might at least be some sense in my death. I thought that it would doubtless be more to the purpose to try and help my comrades as a doctor than to vegetate or finally lose my life as the unproductive laborer that I was then.”

Money for nothing threatens us by systematically leveling our purpose. People may not starve, but they will feel useless. Perhaps the government — or whoever owns the robots — will need to launch the greatest make-work project in history. Pyramid building where the robots watch humans stack stones incompetently and more slowly. Or, perhaps, with all of us strapped in Oculus Rifts, virtual reality can suspend disbelief long enough to create a sense of accomplishment. Or maybe humans will invent businesses to create new engaging and adversity-themed experiences for others. But then the robots haven’t taken all the jobs….whatever the case may be, advocates have identified a problem, but they should admit UBI alone is not the answer.

Originally appeared at The 1517 Fund.

Michael Gibson is cofounder and general partner at 1517 Fund, which invests in technology startups led by young founders.