Economist Milton Friedman famously said, “Nobody spends somebody else’s money as carefully as he spends his own.”

After 20 years and over $2 trillion dollars, the Afghanistan War is finally over. Does that mean our massive defense budget will finally be trimmed? Nope.

Congress is actually on the verge of passing an increase to the Pentagon’s budget, preparing to allocate $740 billion for the fiscal year 2021-2022. That’s more than President Joe Biden even requested. In fact, it’s $37 billion more.

The National Defense Authorization Act, better known as the NDAA, is passed annually and allocates funding for our military industrial complex. With few exceptions, it is passed with overwhelming bipartisan support each year. It’s worth knowing that the military budget is the largest portion of the discretionary federal budget, accounting for 11 percent of overall federal spending. 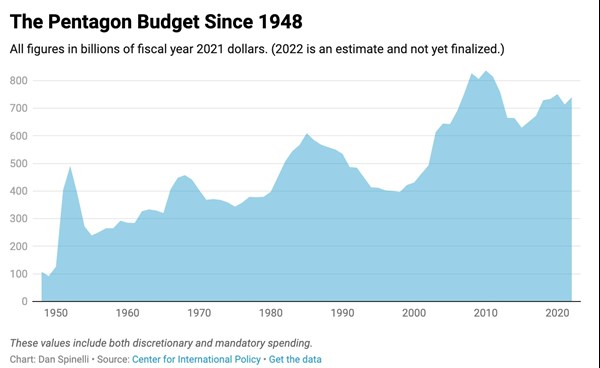 Representative Mark Pocan, a reliable critic of Pentagon funding, said it made little sense to allocate more funds to the Pentagon than the president requested or what House Appropriations had approved.

“At a time when the United States is withdrawing from wars abroad, we should be committed to cutting our defense spending now more than ever,” said Pocan, a Democrat who has represented Wisconsin’s 2nd congressional district since 2013.

Representative Barbara Lee (D, CA), who in 2001 was the only member of Congress to vote against a congressional resolution authorizing force against those responsible for the 9/11 attacks, wrote a letter with two dozen of her Democratic colleagues calling for a cut to the “bloated defense budget that has enabled 40 years of blank check wars around the globe.”

Despite the best efforts of these representatives, it is likely enough Republicans and centrist Democrats will pull together to push this bill through.

Why We Can’t Have Nice Things

Facing a nearly $29 trillion national debt and the conclusion of a 20-year war, many Americans likely believed (or at least hoped) that military spending might finally be curbed.

Alas, that's not how Washington, DC works. This is a shame, because there are many reasons that Congress should be cutting the defense budget.

Namely, it is too high to begin with, and overrun with waste, fraud, and abuse.

In case you missed the headlines, numerous instances of that corruption have come to light in recent years. In 2016, the Pentagon tried to bury an internal study that found $125 billion in waste out of fear it would lead to budget cuts. In 2019, they managed to spend $61 billion in a single month. How? On $9,000 chairs and $4.6 million worth of crabs and lobsters, of course. This was due to the “use it or lose it” approach to budget management, which incentivizes the Pentagon to use up funds lest they experience budget cuts the next go-around.

And this doesn’t even begin to touch on the real depths of abuse. The Pentagon wastes an untold amount on weapons that are unworkable, unaffordable, or unnecessary. They overpay their buddies at Boeing and other contractors for these weapons. And then they abandon them to be blown up or—worse yet—seized by our enemies when it’s time to leave.

For the record, the Pentagon has never once passed an audit, and therefore, it never answers for the jaw-dropping amounts of waste, fraud, and abuse. They just get more and more money.

The Department of Defense provides a real time example of this principle, spending Americans' tax dollars with reckless abandon.

Once again, the military industrial complex has proven itself to be one of the most costly and damaging political entities in existence. It will continue to lobby for more money and more funds for its friends—which inevitably provides an incentive for more and longer conflicts—until we the people finally wake up to its true nature and say enough is enough.