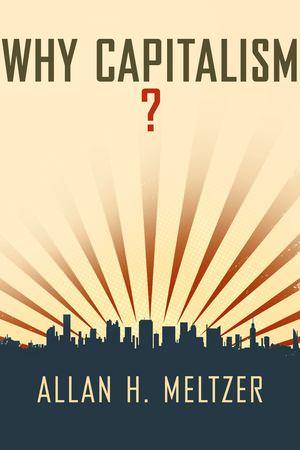 Allan Meltzer is an eminent professor of economics at Carnegie-Mellon University. He is a world-renowned U.S. Federal Reserve scholar, a 1973 founder and chairman of the Shadow Open Market Committee, and an American Economic Association Distinguished Fellow. What else could he possibly add to those laurels?
Meltzer has written Why Capitalism?
Meltzer answers that question with personal and scholarly reflections on capitalism—the one economic system that achieves both prosperity and individual freedom. While Meltzer celebrates such bounty, anyone expecting a polemic will surely be disappointed.
Meltzer gives himself a wide enough berth to assess capitalism across many cultures, countries, and mixed economies. To satisfy his definition, functioning capitalism more or less requires individual ownership of the means of production, property rights protection, and the rule of law. As Meltzer sees it, these basic features can be found in economies with both large and small public sectors, in countries with massive amounts of regulation, and in places where the necessary institutional building blocks are just beginning to form. In no way does he expect his definition to be satisfied perfectly in practice.
Of the many stars in the constellation of capitalist thinkers, Meltzer mentions Friedman and Hayek. Otherwise, his central foundational figure is Immanuel Kant. The book begins with Kant’s fundamental assertion about human nature: “Out of timber as crooked as that from which man is made, nothing entirely straight can be carved.” And Meltzer echoes this truth throughout Why Capitalism?
The point is simple and powerful: Imperfect human beings build institutions that undergird economic systems. Capitalism will include flaws, imperfections, corrupt practices, and wasted resources. And so will any other economic system. Capitalism’s saving grace, however, is found in decentralization of decision-making, in competition for resources, and in dynamic markets. Markets are filled with customers who create competitive forces that reduce the cost of error and the scope of corruption. The power of capitalism lies in the system’s unique ability to punish resource owners who make bad decisions, to reward those who create value, and to adapt to rapidly changing conditions. Capitalism disperses power while other systems concentrate power.
Because of these inherent traits, Meltzer views capitalism as the best of the imperfect systems fashioned from crooked timber. Unlike other systems, capitalist systems are adjusted and reformed by success and failure. Along these lines, we find Meltzer’s own famous quip: “Capitalism without failure is like religion without sin: It doesn’t work.”
Meltzer offers a good treatment of the empirical work relating to economic growth across countries as it relates to variations in economic freedom. He also pays a lot of attention to regulation and the unfortunate incentives that accompany collective efforts to steer markets or to correct perceived excesses. In this he offers his first and second laws of regulation: First, lawyers and bureaucrats regulate. Markets circumvent regulation. Second, regulations are static. Markets are dynamic. (There is plenty here to contemplate.)
One finds a number of remarkable sections in Meltzer’s little book. Two of these gems are his summary of U.S. monetary history—which draws, of course, on his own two-volume history—as well as his criticism of the newly formed institutions that arose in the wake of the Great Recession. Meltzer tears into the notion that the Fed is independent of government by citing instances where presidents pressured and got their desired response from Fed officials. He tells fascinating stories of how, with the exception of the Volcker years, the flawed logic of the Phillips Curve has strongly influenced Fed behavior.
Meltzer also looks critically at the perverse incentives found in Dodd-Frank, “too big to fail,” and the new and strangely unaccountable Consumer Financial Protection Bureau. In doing all this, Meltzer demonstrates his masterful ability to perform institutional analysis while focusing on the future health of American capitalism. Along the way, Meltzer offers some well-reasoned policy recommendations that could improve the nation’s long-run prospects for wealth creation.
Why Capitalism? is an ideal selection for small-book discussion groups, students, scholars, business people, and all who have an interest in capitalism’s ability to adapt and survive as ideologues attempt in vain to fashion more perfect systems from crooked timber.