Why Are so Many Refugees Drowning?

The boats are dangerous and planes are safe

If you follow the news, you've probably seen a number of stories recently about refugees drowning when overloaded boats sank crossing the Mediterranean Sea. A week and a half ago, more than 900 people died when their boat capsized off the coast of Libya. Yesterday, another boat sank in the Aegean Sea, killing at least one.

The New York Times reports that 1,200 people drowned in a single week last month, in a year that was already on track to be the worst ever for migrant deaths.

This year’s death toll in the Mediterranean Sea is thought to have already surpassed 1,500 victims — a drastic spike from the same period last year.

With the arrival of warmer weather, the number of migrants on smuggling boats has risen sharply, with more than 11,000 people being rescued during the first 17 days of April.

In all of last year, 3,200 people died on this voyage, and nearly 130,000 refugees were rescued by the Italian navy. The Times estimates migrant crisis is nearing record levels, as people flee from war-torn and destitute places like Afghanistan, Syria, and Iraq, as well as African countries such as Gambia, Somalia, Mali, and Eritrea.

Most of these international refugees are flowing to Europe through Libya, because its own chaotic state means that smugglers can operate without fear of local state interference. The Times helpfully charts the flow of asylum seekers through Africa and the Middle East to Libya: 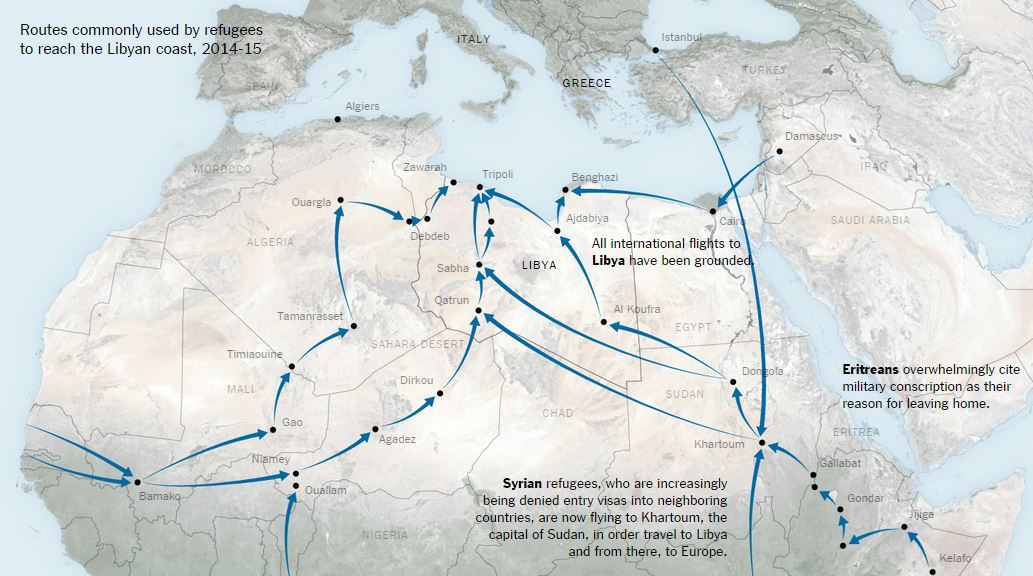 In the midst of this, Professor Hans Rosling (you might have watched his videos on human life expectancy and the magic washing machine — if you haven’t, you should) asks a curious question: Why don’t they fly?

It’s an interesting question. If travelling through civil wars and failed states to board tiny and dangerously overcrowded boats is so risky, why don’t refugees and migrants just hop on a safe, short, convenient flight to Europe and then seek asylum there?

It’s not because it’s too expensive. Rosling points out that a seat on these boats costs €1,000 or more, while a flight from Ethiopia to Sweden is only €400; from Lebanon to the UK is also €400; and from Egypt to Italy is only €320.

It’s not because their governments are stopping them, either. By and large, these states have no real ability or interest in stopping emigration (Eritrea probably being one exception, where many people are fleeing to avoid military conscription).

It isn’t even because Europe won’t accept them. Many EU nations, such as Germany and Sweden, have been accommodating to asylum seekers.

Rather, it is about incentives. Rosling:

What exactly is it that stops the refugees from flying to Europe to apply for asylum? They can reach the airport, they can afford to buy a ticket, but at the check-in counter, they are stopped by the airlines from getting onto the airplane.

Rosling points to EU Directive 2001/51/EC, which states — in essence — that to combat illegal immigration, “Every airline and boatline that brings a person without the proper documents for entry has to pay all the costs for returning that person back to their country of origin.”

The directive explicitly exempts migrants who have rights as refugees under the Geneva Conventions. But who determines who is a “legitimate” refugee, and who is just an “illegal immigrant”?

In effect, the EU has dumped this responsibility onto the airline staff at the check-in counter, and if they get it wrong — in the judgment of the destination country — the airline has to pay all of the costs of the deporting them.

All of the incentives are towards denying anyone who doesn’t have a visa from the destination country, even though — according to EU regulations and the Geneva Conventions — the refugee might have a right to flee and to seek asylum.

“It is this directive,” says Rosling, “that is the reason for so many refugees drowning in the Mediterranean Sea.”