The bottom line is that there is a recipe for growth and prosperity.

A key insight of international economics is that there should be “convergence” between rich countries and poor countries, which is just another way of saying that low-income nations—all other things being equal—should grow faster than high-income nations and eventually attain the same level of prosperity.

The theory is sound, but it’s very important to focus on the caveat about “all other things being equal.” As I explain in this interview from my last trip to Australia, countries with bad policy will grow slower than nations that follow the right policies.

When I discuss convergence, I often share the data on Hong Kong and Singapore because those jurisdictions have caught up to the United States. But I make sure to explain that the convergence was only possible because of good policy.

I also share the data showing that Europe was catching up to the United States after World War II, just as predicted by the theory, but then convergence ground to a halt once those nations imposed some bad policy—such as costly welfare states. 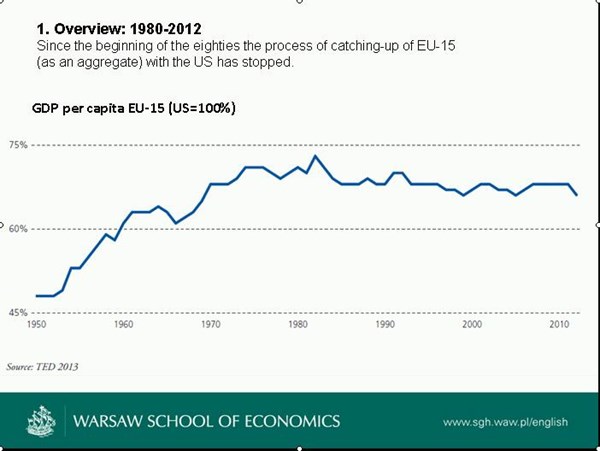 In other words, convergence is a choice, not destiny.

Countries with small government and laissez-faire markets are the ones that grow and converge. The nations with statist policy languish and suffer. Or even de-converge (with Argentina and Venezuela being depressing examples).

Let’s see what academics have to say about this issue.

We’ll start by looking at some research at VoxEU by Professor Linda Yueh. She wants to understand the characteristics that determine national prosperity.

It’s a long-standing economic question as to why more countries are not prosperous. …The World Bank estimates that of the 101 middle-income economies in 1960, just a dozen or so had become prosperous by 2008… But, hundreds of millions of people have joined the middle classes. …How has this been achieved? Possessing good institutions is what economists have come to focus on and the spread of such institutions seems to have been key…the father of New Institutional Economics…Douglass North…stressed that there was no reason why countries could not learn from more successful economies to better their own institutions. That finally happened in the 1990s.

I’m a fan of Douglass North since he—along with many other winners of the Nobel Prize—has endorsed tax competition.

In his case, the goal was for nations to face pressure to adopt good institutions.

And Professor Yueh explains that this means rule of law and free markets.

China, India, and Eastern Europe changed course. China and India re-oriented their economies outward to integrate with the world economy, while Eastern Europe shed the old communist institutions and adopted market economies. In other words, having tried central planning (in China and the former Soviet Union) and import substitution industrialisation (in India), these economies abandoned their old approaches and adopted as well as adapted the economic policies of more successful economies. For instance, China, which has accounted for the bulk of poverty reduction since 1990, undertook an ‘open door’ policy that sought to integrate into global production chains which increased competition into its economy that had been dominated by state-owned enterprises. India likewise abandoned its previous protectionist policies…in Central and Eastern Europe. Communism gave way to capitalism, with these nations adopting entirely new institutions that re-geared their economies toward the market.

All of this is good news, but not great news. Simply stated, partial liberalization can lift people out of poverty.

But it takes comprehensive liberalization for a nation to become genuinely rich.

As many of these economies, especially China, have become middle-income countries, their economic growth is slowing down. And they may slow down so far that they never become rich. But, their collective growth has lifted a billion people of out of extreme poverty.

Let’s now see what other scholars say about convergence.

Some new research from the St. Louis Federal Reserve examines this topic. Here’s the mystery they want to address.

Over the past half-century, world income disparities have widened. The gap in real gross domestic product (GDP) per capita relative to the United States between advanced and poor countries has increased. For example, the ratio of average real GDP per capita among the top 10 percent of countries to the bottom 10 percent has increased from less than 20 in 1960 to more than 40 in 1990, and to more than 50 since the turn of the new millennium… The main point to be addressed in this article is why the income disparities between fast-growing economies and development laggards have widened.

In other words, they want to understand why some nations converge and some don’t.

We select a set of 10 fast-growing economies. This set includes Asian countries and African economies that are perceived as better performing. In contrast, we select a set of 10 development laggards. Beyond the typical candidates of countries mired in the poverty trap, this set includes countries with similar or even better initial states than some of the fast-growing countries, but with divergent paths of development leading to worse macroeconomic outcomes. That is, among development laggards, we choose two subgroups, one consisting of trapped economies and another of lag-behind countries. …Using cross-country analysis, we find that a key factor for fast-growing countries to grow faster than the United States and for trapped economies to grow slower than the United States is the relative TFP… Overall, we find that institutional barriers have played the most important role, accounting for more than half the economic growth in fast-growing and trapped economies and for more than 100 percent of the economic growth in the lag-behind countries.

Here are their case studies, showing income relative to the United States (a 1.0 means the same degree of prosperity as America). 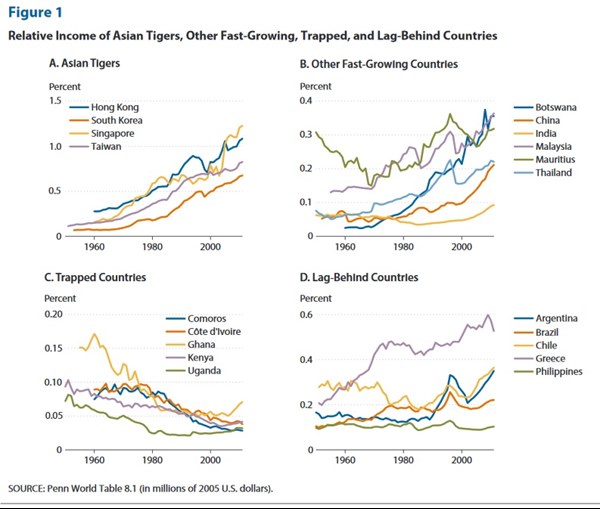 As you can see, some nations catch up and some fall further behind, while others have periods of convergence and de-convergence.

And what causes these changes?

…we identify that unnecessary protectionism, government misallocation, corruption, and financial instability have been key institutional barriers causing countries to either fall into the poverty trap or lag behind without a sustainable growth engine. Such barriers have created frictions or distortions to capital markets, trade, and industrialization, subsequently preventing these countries from advancing. …By reviewing the previous country-specific details, one can see that the 10 fast-growing countries have all adopted an open policy… Their governments have undertaken serious reforms, particularly in both labor and financial markets. …Thus, the establishment of correct institutions and individual incentives for better access to capital markets, international trade, and industrialization can be viewed as crucial for a country to advance with sustained economic growth

Interestingly, the study from the St. Louis Federal Reserve includes some country-specific analysis.

Here’s what it said about India, which suffered during an era of statism but has enjoyed decent growth more recently thanks to partial liberalization.

During 1950-90, India’s per capita income grew at an average annual rate of only about 2 percent, a result due to the Indian government’s implementation of restrictive trade, financial, and industrial policies. The Indian state took control of major heavy industries, by including additional licensing requirements, capacity restrictions, and limits on the regulatory framework. …In the late 1970s, the Indian government opened the economy by liberalizing both international trade and the capital market, leading to rapid growth in the early 1990s. As argued by Rodrik and Subramanian (2005), the trigger for India’s economic growth was an attitudinal shift on the part of the national government in 1980 in favor of private businesses. …The final trigger of the major economic reform of Manmohan Singh in the 1990s was due to the well-known 1991 balance-of-payment crisis….This reform ended the protectionist policies followed by previous Indian governments and started the liberalization of the economy toward a free-market system. This event led to an average annual growth rate that exceeded 6 percent in per capita terms during 1990-2005.

For what it’s worth, I am semi-pessimistic about India. Simply stated, there’s hasn’t been enough reform.

We also have some discussion regarding Argentina, which is mostly a sad story of ever-expanding government.

Argentina is the third-largest economy in Latin America and was one of the richest countries in the world in the early twentieth century. However, after the Great Depression, import substitution generated a cost-push effect of high wages on inflation. During 1975-90, growing government spending, large wage increases, and inefficient production created chronic inflation that increased until the 1980s, and real per capita income fell by more than 20 percent. …In 1991, the government attempted to control inflation by pegging the peso to the U.S. dollar. In addition, it began to privatize state-run enterprises on a broader basis and stop the run of government debt. Unfortunately, lacking a full commitment, the economy continued to crumble slowly and eventually collapsed in 2001 when the Argentine government defaulted on its debt. Its GDP declined by nearly 20 percent in four years, unemployment reached 25 percent, and the peso depreciated by 70 percent after being devalued and floated.

But if we go to the other side of the Andes Mountains, we find some good news in Chile.

From the Second World War to 1970, real GDP per capita of Chile increased at an average annual rate of 1.6 percent, and its economic performance was behind those of Latin America’s large and medium-sized countries. Chile pursued an import-substitution strategy, which resulted in an acute overvaluation of its currency that intensified inflation. …Although most Latin American countries have practiced strong government intervention in the markets since the mid-1970s, Chile pursued free market reform. …The outcomes are as follows: Exports grew rapidly, per capita income took off, inflation declined to single digits, wages increased substantially, and the incidence of poverty plummeted (compare with Edwards and Edwards, 1991). Since the democratic administration of Patricio Aylwin in 1990, the economic reform has been accelerated and Chile has become one of the healthiest economies in Latin America.

Not only has Chile become the richest nation in Latin America, it also has enjoyed significant convergence with the United States. About 40 years ago, according to the Maddison database, per-capita GDP in Chile was only about 20 percent of U.S. levels. Now it is 40 percent.

I’ll close with a chart, based on the Maddison numbers, showing how Hong Kong, Singapore, and Switzerland have converged with the United States. These are the only nations that have ranked in the top-10 for economic freedom ever since the rankings began. As you can see, their reward is prosperity. 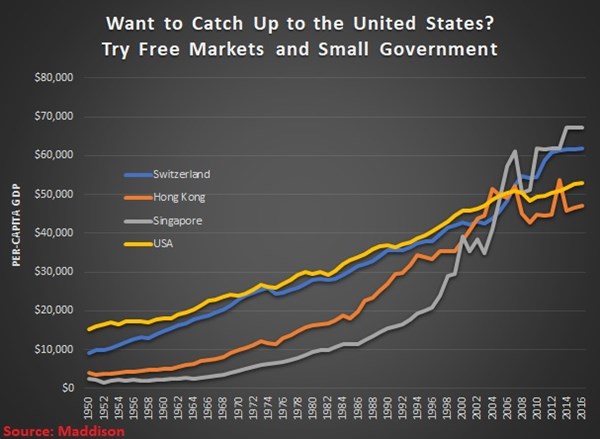 The bottom line is that there is a recipe for growth and prosperity. That’s the good news.

The bad news is that very few nations follow the recipe since economic liberty means restricting the power of special interests and the political elite.