It seems that Venezuela’s dictator Nicolás Maduro has finally found the way to bring the country out of the unprecedented economic crisis Venezuela is immersed in since 2012. The ineffable leader of the Bolivarian Revolution has recently announced the launching of a new currency, the so-called Sovereign Bolivar, which will replace the bolivar as the official medium of exchange starting in June. 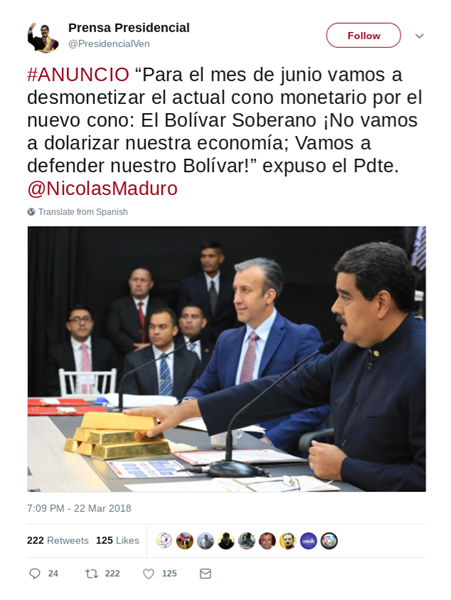 The announcement was made via Twitter, where Maduro said that the current bolivar will be demonetized (cease to be legal tender) in favor of the new currency. The truth is that the bolivar was de facto demonetized a long time ago by the market due to the irresponsible monetary policy (basically, printing money to fund budget deficits year after year) undertaken by the Central Bank of Venezuela, fully controlled by the Bolivarian government.

But what’s so special about this new currency that is expected to solve the worst economic crisis that Venezuela has experienced in the last decades? Simple: it removes three zeros from the current bolivar. In other words, 1,000 current bolivars will become 1 sovereign bolivar. According to the Venezuelan authorities, this will help fight inflation, a first step towards fixing the deteriorated economic situation of the country. But will it?

The Economics of the Situation

Let’s take a look at economic theory. Like the demand for other goods, the demand for money depends on the utility economic agents derive from it. When an independent central bank promises to deliver a common-sense monetary policy aimed at, for instance, stabilizing the price level, people will demand that currency because of its usefulness as a medium of exchange and store of value. However, when a central bank irresponsibly inflates its currency due to political pressures, prices end up skyrocketing and consumers and investors cease to use it, shifting to other currencies or commodities that better meet their necessities.

Changing the nominal value of money by removing three zeros is useless as long as confidence in monetary authorities is not restored.

If we apply this line of reasoning to the Venezuelan case, the corollary is simple: when it comes to fiat money, trust is key. Expectations about the future purchasing power of a currency affect its demand today, which in turn determines its relative price with respect to other currencies as well as goods and services. Therefore, changing the nominal value of money by removing three zeros is useless as long as confidence in monetary authorities (which, in this case, is the same as saying the Venezuelan government) is not restored.

Yet, taking into account the track record of Maduro’s government, this seems to be a chimera. Maduro has led the country to the abyss in a very short period of time. Venezuela has seen real GDP decline by 16.5 percent in 2016 and 14 percent in 2017, and it is expected to decline by another 15 percent in 2018. The humanitarian crisis has pushed 1.1 million people to flee the country in pursuit of a better life. In addition, the NGO Caritas Venezuela estimates that 280,000 children could die of malnutrition in 2018.

The sinking of oil prices has played a role in the current crisis by depriving the Venezuelan government of a large fraction of its revenue. This oil dependency is long-running, but it has grown bigger since Hugo Chávez came to power in 1999. From day one, Chávez used oil revenues to create a subsidized and dependent population which served as support for remaining in power and transforming Venezuela into a socialist country à la Cuba.

However, the causes of Venezuela’s economic and humanitarian crisis cannot be exclusively attributed to oil. When oil prices sank, the Venezuelan government could have trimmed the budget and helped restructure its economy to make it more diversified and less oil-dependent.

Gimmicks like removing three zeros from the bolivar are only cosmetic changes that will have little (if any) positive effect on the economy.

Instead, it decided to print money in order to fund public spending. When prices began to soar due to excessive money printing, the government imposed price ceilings on many products, which led to shortages of food and other essentials across the country. In addition, Maduro has continued with Chavez’s nationalization policy, undermining the private sector’s capacity to produce goods and services.

In light of the above, gimmicks like removing three zeros from the bolivar or the creation of a State-sponsored cryptocurrency are only cosmetic changes that will have little (if any) positive effect on the economy.

As suggested by the economist Steve Hanke, the only viable solution involves dollarizing the economy and getting rid of government-imposed economic restrictions like price ceilings so that markets can do what they do best: allocate resources efficiently and achieve economic growth.

But to do this, it is necessary that a new government brings stability to the country and puts an end to the Bolivarian Revolution once and for all.