USPS Is Going Down, and It's Taking Billions with It

The existential crisis is already happening

The U.S. Postal Service lost nearly $5 billion this past year, according to its just-released year-end financial results. As in recent years, the agency did not make the legally required $5.7 billion payment to its Retiree Health Benefits Fund. The agency is $15 billion in debt and legally prohibited from borrowing additional funds. The unfunded portion of its retiree-health-benefits obligation is $54 billion.

Revenues increased slightly but mail volume slid by 1.4 billion pieces from last year to 154 billion. The agency has $6.6 billion of cash on hand, which is better than in recent years and means USPS is in no immediate danger of having to shut off the lights due to lack of cash. The agency’s financial results benefited from a temporary emergency price increase and a lower-than-expected employee compensation charge.

All told, the results confirm what’s been obvious for some time: the USPS faces not just a financial crisis, but an existential one. The agency’s business model was predicating on the assumption that granting it a monopoly over first-class mail delivery would enable it to reap high margins that would subsidize the agency’s service nationwide. Thanks to electronic bill-paying services, among other factors, first-class mail volume has plunged. Worse still, total mail volume is down more than 25 percent since 2007. 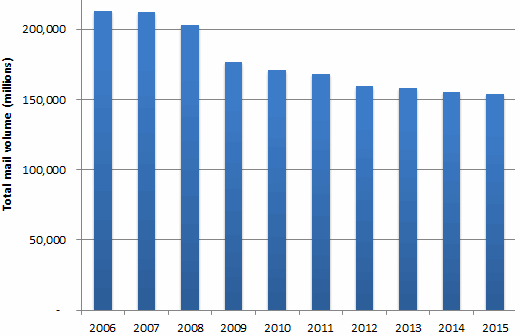 Equally problematic is that the USPS’s mission has become increasingly anachronistic. The agency’s authorizing statute declares:

The Postal Service shall have as its basic function the obligation to provide postal services to bind the Nation together through the personal, educational, literary, and business correspondence of the people.

Can anyone in the modern age say with a straight face that our nation is united by mail? Moreover, the word “correspondence” denotes two-way communication, such as me sending a letter to my mother and she writing me back.

But person-to-person correspondence is less than 1 percent of the mail sent, as the USPS’s household diary study and “revenue, pieces and weight” reports show. Most mail today is not correspondence; it’s advertisements and solicitations broadcast at the public.

Magazines — which, in some instances, may be “educational” or “literary,” but often not — constitute less than 5 percent of the mail. Packages account for about 1 percent of what the postman delivers, despite the widespread misperception that USPS is a big parcel-deliverer. When I logged and surveyed a month’s worth of my own mail recently, almost one-third of what arrived were needless corporate notifications, like my mortgage company sending me a paper bill despite my choice to auto-pay online.

To date, Congress has proven wholly incapable of thinking big about what sort of USPS we need for the 21st century and beyond. For the past five years, lawmakers have feuded among themselves about what to do. Neither the House nor Senate has voted on any of the postal-reform bills that have been introduced.

Much of this paralysis is driven by the forces of the status quo. Postal unions (one of which has endorsed a socialist for president) and liberal romantics deny an existential problem exists. These same individuals often propagate the myth that the USPS would be doing just fine were it not for the mandate that it prefund its health-care benefits.

Economist Michael Schuyler has shown that if you remove this cost, USPS nevertheless lost $10 billion over the past seven years, and the situation would have been worse still were it not for the temporary emergency-rate increase, which forces mailers to pay the government monopoly more. These same proponents of the status quo tacitly admit the USPS’ existential problem when they advocate for it to enter new lines of business, like banking.

Many congressmen, particularly from rural areas, object to shuttering post offices and outsourcing counter service to private retail outlets, like cafes and big box stores. And many legislators treat reducing home-mail delivery service from six to five days a week as a non-starter, no matter that USPS wants to do it or that the shift would save money.

For the foreseeable future, America will see more of the same news. Absent a miraculous rebound in mail volume and revenues or an outbreak of political courage on Capitol Hill, the Postal Service likely will continue to post losses and do what it can to trim service.

Kevin R. Kosar is the director of the Governance Project and a senior fellow at the R Street Institute. He covered postal issues for the Congressional Research Service for more than a decade.