US-Russia Tensions Are Escalating Because of Collusion Fever

The best way to oppose Trump is to oppose his aggressive foreign policy, which has real-life consequences for innocent people around the world. 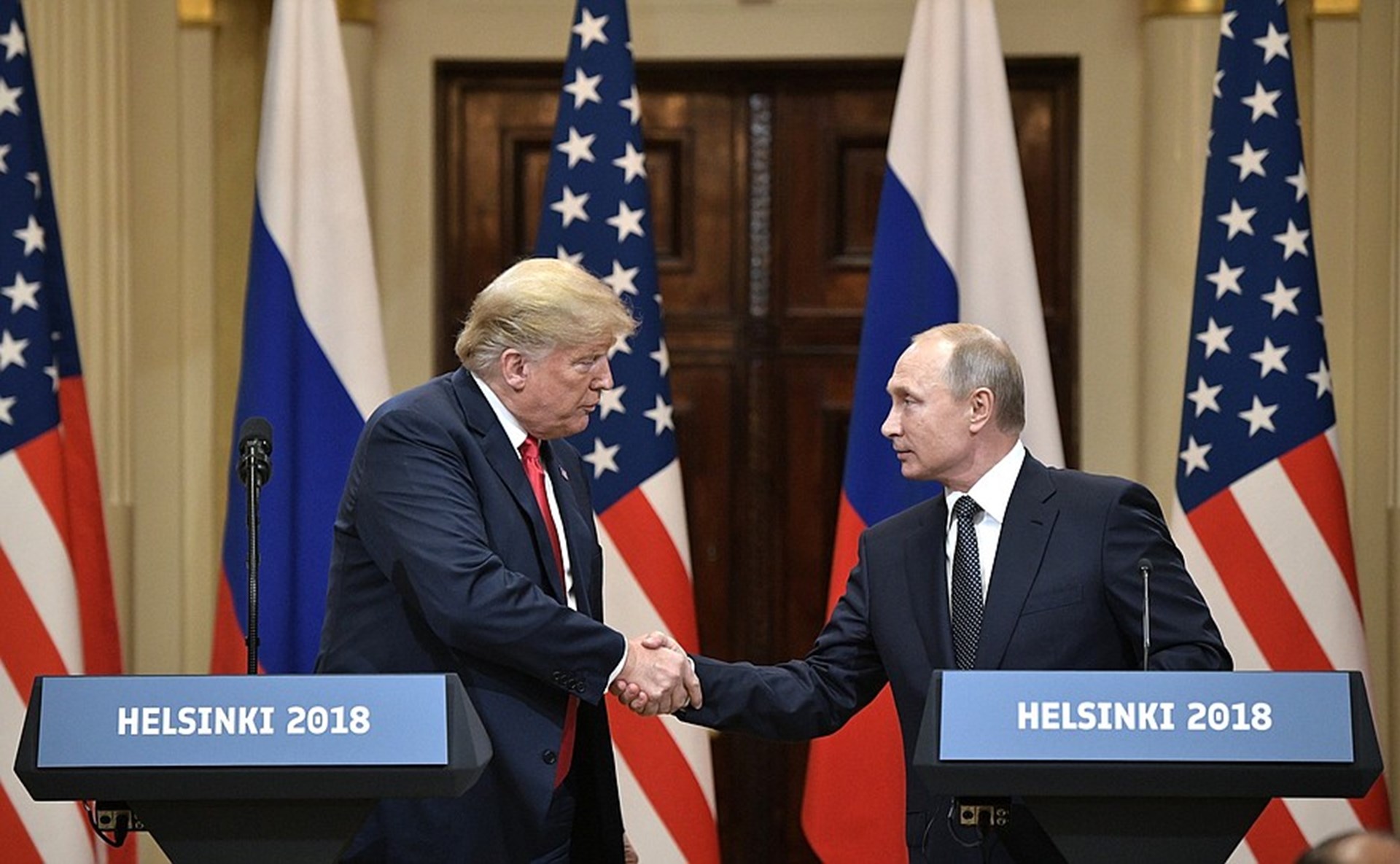 Establishment media and politicians began to sound the alarm on fake news after Donald Trump won the presidency in 2016, blaming deception and ignorance for his victory. But as much as they might worry about the spread of false narratives and disinformation, their thirst for stories about Russia colluding with then-candidate Trump during the 2016 election proved to be a powerful brand of fake news—one that has most certainly put lives at risk.

In the aftermath of Trump’s victory, the “Russia hacked the election” narrative quickly became the gospel of the mainstream left. It was only a matter of time, they claimed, until the facts revealed the nefarious relationship between Trump and the Kremlin and exposed the flagrant collusion that led to Clinton’s defeat. There was just one problem: the outlets drumming up this narrative lacked evidence to substantiate it.

In one instance, The Washington Post reported that Russia had penetrated the US electricity grid only to be forced to issue a correction admitting they had their information wrong. In another show of sensational Russiagate journalism, The Post published a story citing an anonymous group called PropOrNot claiming Russia had infiltrated alternative news outlets to spread Russian propaganda.

After respected journalists like The Intercept’s Glenn Greenwald and Rolling Stone’s Matt Taibbi roundly condemned the article’s betrayal of basic journalistic standards, the Post issued a tepid clarification two weeks later—after the story had already made its rounds as fact.

A slew of sparsely substantiated speculations and stories has flooded the consciousness of millions of Americans since 2016. In another example, a story published by The New York Times claimed the CIA had proof Russia was behind Trump’s victory but cited nothing more than anonymous officials’ statements. As Greenwald observed at the time:

Democrats — still eager to make sense of their election loss and to find causes for it other than themselves — immediately declared these anonymous claims about what the CIA believes to be true, and, with a somewhat sweet, religious-type faith, treated these anonymous assertions as proof of what they wanted to believe all along: that Vladimir Putin was rooting for Donald Trump to win and Hillary Clinton to lose and used nefarious means to ensure that outcome.

Despite apt criticism like this, elaborate theories of Russia’s infiltration of American democracy spurred hysteria among Americans, politicians, and journalists who oppose Donald Trump’s presidency. This panic, in turn, has plunged America into Cold War 2.0 with Russia, which, as Hillary Clinton warned, puts “lives at risk” without producing evidence to remove Trump from power.

Despite rampant, unverified narratives that the president worked hand-in-hand with Putin, the media’s ongoing claims of his traitorous activity at worst contributed to the president’s already hawkish policies—and at best failed to hold him accountable for them. As The Nation magazine noted last April,

Democrats and much of the media ... have incessantly demanded Trump “‘get tougher’” with Russia and its President Vladimir Putin in order to demonstrate that his election had not been abetted by “collusion with the Kremlin."

As the Russiagate narrative insisted Trump was Putin’s pawn, the president was actually heightening tensions with his alleged collaborators, playing a global game of chicken. On numerous occasions, US forces have been in direct opposition to—and exchanged gunfire with—Russian forces in Syria. Considering the left-leaning media’s ongoing demonization of Trump, from his dietary preferences to his mental health, challenging this aggressive foreign policy should have been low-hanging fruit.

He campaigned on the promise of ending America’s longstanding policy of nation-building, a promise he has failed to keep with his ongoing bombings in Iraq, Afghanistan, and elsewhere which have killed record numbers of civilians. Despite his rhetoric indicating a withdrawal of troops from Syria, US troops remain stationed there. (This is, of course, not unique to Trump. It is par for the course in modern American politics: war is the health of the state.)

Instead of seizing the opportunity to promote peace and discourage violent conflict, however, outlets chose to side with the jingoists. When Trump launched an airstrike in Syria over claims of Assad’s use of chemical weapons attacks in 2017, pundits from MSNBC and CNN lauded his aggression (only to later report that Mattis admitted the US lacked proof when they decided to launch the strike). Of the 47 editorials written about that strike in major outlets, only one expressed opposition. CNN host Fareed Zakaria praised him. “I think Donald Trump became president of the United States last night,” he said.

In contrast, when Trump announced he would be bringing US troops home from Syria, the media called it a “win for Putin.” This pro-war push from the left is not a fringe trend in the age of Trump. As Greenwald reported in January of this year following the president’s (now compromised) plan to withdraw troops,

Of people who voted for Clinton in 2016, only 26 percent support withdrawing troops from Syria, while 59 percent oppose it.

While Democrats were more or less evenly divided early last year [2017] on whether the U.S. should continue to intervene in Syria, all that changed once Trump announced his intention to withdraw, which provoked a huge surge in Democratic support for remaining.

Greenwald views this data as representative of a “reversal by Democrats on questions of war and militarism in the Trump era.”

If Democrats were rationalizing Barack Obama’s pro-war policies when he was in power, they are now actively advocating for them as long as doing so is in defiance of Donald Trump.

Despite his rhetoric, however, Trump’s overall foreign policy remains aggressive, and the media and Democrats’ animosity toward Russia could move the US toward a confrontation with Russia. In February, the Trump administration announced it was withdrawing from the decades-old “Intermediate-range Nuclear Forces” treaty with Russia that previously banned the placement of nuclear weapons in Europe. Both sides had accused each other of violating the agreement, and Putin warned of retaliation against the US should they position missiles in Europe. The Nation magazine observed that

more than two years of Russiagate allegations, which have demonized both Trump and ‘Putin’s Russia,’ have probably made it easier, if not tempting, for Trump to quit the INF Treaty.

Similarly, Russiagaters admonished Trump’s diplomacy summit with Putin last year, dismissing the fact that such talks have been a tradition for US presidents since Franklin D. Roosevelt met with Stalin.

The Trump administration is also posturing against Russia in other parts of the world; his ongoing trade war with China is part of the reason for the nuclear treaty pull-out, and late last month, Trump ordered Russia to remove its troops from Venezuela. He has also imposed numerous rounds of sanctions on Russia and Russian officials and armed Ukraine against Russian interests.

This is not the first time Russia scares have influenced global politics. The first Cold War and the threat of the Soviets’ destruction of democracy was a foundational justification for US wars in Korea and Vietnam, for example. The “domino theory” compelled the US government to act aggressively. Years later in Afghanistan, the CIA armed and funded the mujahideen, which evolved into al-Qaeda, in the name of beating back Soviet influence in the country. The best way to oppose Trump is to oppose his aggressive foreign policy, which has real-life consequences for innocent people around the world.

Afghanistan remains war-torn and overrun with terrorists to this day. US aggression has also been encouraged by the media’s complicity with unsubstantiated government claims, whether in their perpetuation of Lyndon Johnson’s Gulf of Tonkin lie or the weapons of mass destruction debacle in Iraq. The media and politicians’ use of flimsy claims to justify militarism is nothing new.

Unfortunately, fears of external threats serve to catalyze public support for government conflict over diplomacy and cooperation, as the left-wing reaction to Russiagate demonstrates. Equally concerning is the willingness of many citizens to embrace this heightened tension and drumbeat of war under the “fake” presumption that doing so is equivalent to opposing Donald Trump.

In truth, one of the best ways to do that is to oppose his aggressive foreign policy, which has real-life consequences for innocent people around the world and consequently puts the lives of Americans at risk. Considering the US media has refused to own its failures on Russiagate, it’s likely the pervasive anti-Russian hysteria will continue to the detriment of humanity.

Carey Wedler is a video blogger and Senior Editor for Anti-Media.