Trump Surrenders to the Iron Law of Oligarchy

Why it was virtually inevitable and quite predictable. 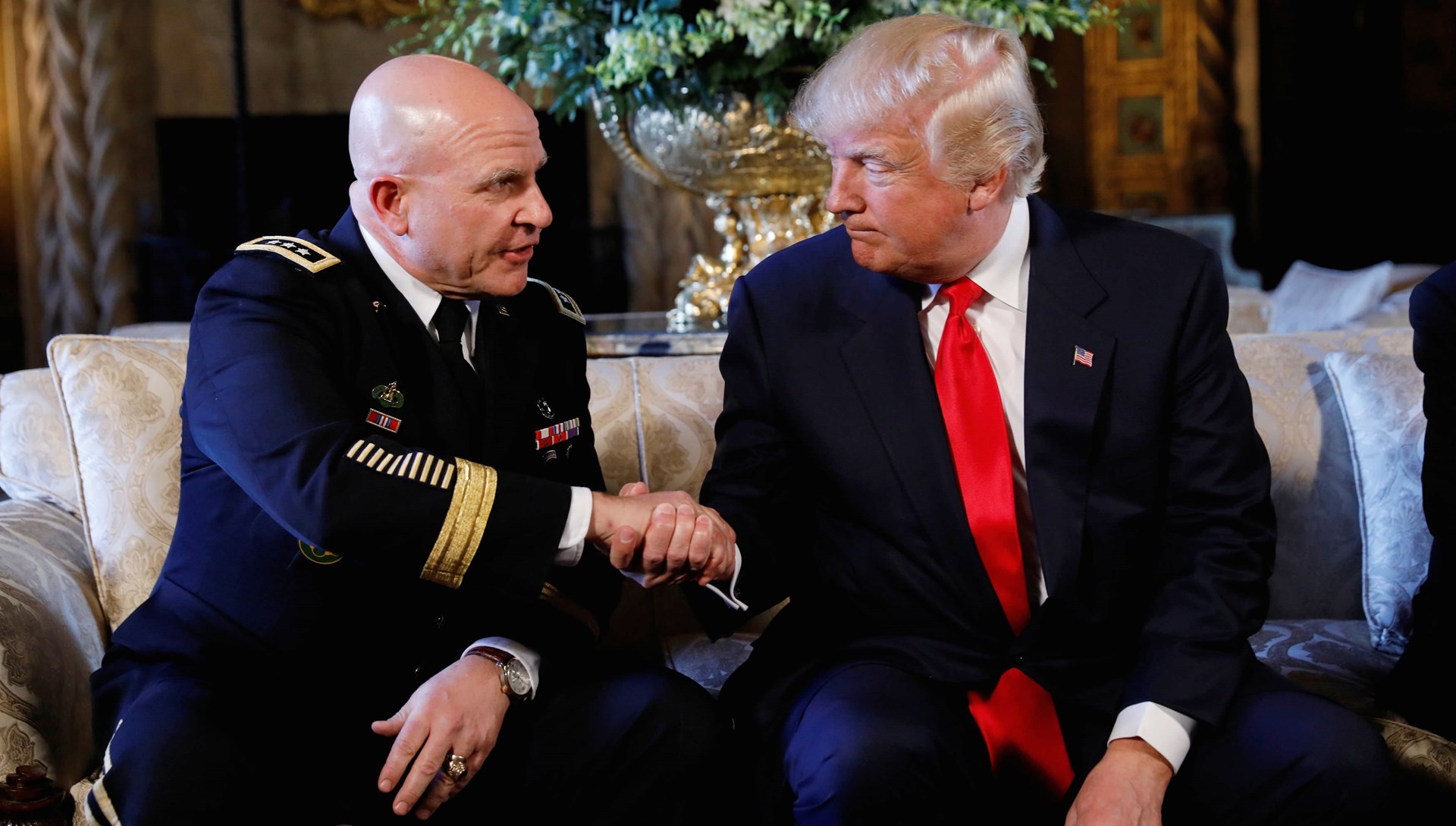 These policies seemed to fit Trump’s reputation as the “tribune of poor white people,” as he has been called.

Many observers, especially among his fans, suspect that the seemingly untamable Trump has already been housebroken by the Washington, “globalist” establishment. If true, the downfall of Trump’s National Security Adviser Michael Flynn less than a month into the new presidency may have been a warning sign. And the turning point would have been the removal of Steven K. Bannon from the National Security Council on April 5.

Until then, the presidency’s early policies had a recognizably populist-nationalist orientation. During his administration’s first weeks, Trump’s biggest supporters frequently tweeted the hashtag #winning and exulted that he was decisively doing exactly what, on the campaign trail, he said he would do.

In a flurry of executive orders and other unilateral actions bearing Bannon’s fingerprints, Trump withdrew from the Trans-Pacific Partnership, declared a sweeping travel ban, instituted harsher deportation policies, and more.

These policies seemed to fit Trump’s reputation as the “tribune of poor white people,” as he has been called; above all, Trump’s base calls for protectionism and immigration restrictions. Trump seemed to be delivering on the populist promise of his inauguration speech (thought to be written by Bannon), in which he said:

For too long, a small group in our nation's Capital has reaped the rewards of government while the people have borne the cost. Washington flourished -- but the people did not share in its wealth. Politicians prospered -- but the jobs left, and the factories closed.

That all changes -- starting right here, and right now, because this moment is your moment: it belongs to you.

It belongs to everyone gathered here today and everyone watching all across America. This is your day. This is your celebration. And this, the United States of America, is your country.

What truly matters is not which party controls our government, but whether our government is controlled by the people. January 20th 2017, will be remembered as the day the people became the rulers of this nation again. The forgotten men and women of our country will be forgotten no longer.

Everyone is listening to you now.” [Emphasis added.]

After a populist insurgency stormed social media and the voting booths, American democracy, it seemed, had been wrenched from the hands of the Washington elite and restored to “the people,” or at least a large, discontented subset of “the people.” And this happened in spite of the establishment, the mainstream media, Hollywood, and “polite opinion” throwing everything it had at Trump.

But for the past month, the administration’s axis seems to have shifted. This shift was especially abrupt in Trump’s Syria policy.

Days before Bannon’s fall from grace, US Ambassador to the UN Nikki Haley declared that forcing Syrian president Bashar al-Assad from power was no longer top priority. This too was pursuant of Trump’s populist promises.

Their “tribune” is turning out to be just another agent of the power elite.

Trump’s nationalist fans are sick of the globalist wars that America never seems to win. They are hardly against war per se. They are perfectly fine with bombing radical Islamists, even if it means mass innocent casualties. But they have had enough of expending American blood and treasure to overthrow secular Arab dictators to the benefit of Islamists; so, it seemed, was Trump. They also saw no nationalist advantage in the globalists’ renewed Cold War against Assad’s ally Russian president Vladimir Putin, another enemy of Islamists.

The Syrian pivot also seemed to fulfill the hopes and dreams of some anti-war libertarians who had pragmatically supported Trump. For them, acquiescing to the unwelcome planks of Trump’s platform was a price worth paying for overthrowing the establishment policies of regime change in the Middle East and hostility toward nuclear Russia. While populism wasn’t an unalloyed friend of liberty, these libertarians thought, at least it could be harnessed to sweep away the war-engineering elites. And since war is the health of the state, that could redirect history’s momentum in favor of liberty.

But then it all evaporated. Shortly after Bannon’s ouster from the NSC, in response to an alleged, unverified chemical attack on civilians, Trump bombed one of Assad’s airbases (something even globalist Obama had balked at doing when offered the exact same excuse), and regime change in Syria was top priority once again. The establishment media swooned over Trump’s newfound willingness to be “presidential.”

Since then, Trump has reneged on one campaign promise after another. He dropped any principled repeal of Obamacare. He threw cold water on expectations for prompt fulfillment of his signature promise: the construction of a Mexico border wall. And he announced an imminent withdrawal from NAFTA, only to walk that announcement back the very next day.

Here I make no claim as to whether any of these policy reversals are good or bad. I only point out that they run counter to the populist promises he had given to his core constituents.

“The forgotten men and women of our country” have been forgotten once again. Their “tribune” is turning out to be just another agent of the power elite.

Who yanked his chain? Was there a palace coup? Was the CIA involved? Has Trump been threatened? Or, after constant obstruction, has he simply concluded that if you can’t beat ‘em, join ‘em?

The Iron Law of Oligarchy

Regardless of how it came about, it seems clear that whatever prospect there was for a truly populist Trump presidency is gone with the wind. Was it inevitable that this would happen, one way or another?

One person who might have thought so was German sociologist Robert Michels, who posited the “iron law of oligarchy” in his 1911 work Political Parties: A Sociological Study of the Oligarchical Tendencies of Modern Democracy.

Even in a political system based on popular sovereignty, Michels pointed out that, “the sovereign masses are altogether incapable of undertaking the most necessary resolutions.” This is true for simple, unavoidable technical reasons: “such a gigantic number of persons belonging to a unitary organization cannot do any practical work upon a system of direct discussion.”

This practical limitation necessitates delegation of decision-making to office-holders. These delegates may at first be considered servants of the masses:

“All the offices are filled by election. The officials, executive organs of the general will, play a merely subordinate part, are always dependent upon the collectivity, and can be deprived of their office at any moment. The mass of the party is omnipotent.”

But these delegates will inevitably become specialists in the exercise and consolidation of power, which they gradually wrest away from the “sovereign people”:

“The technical specialization that inevitably results from all extensive organization renders necessary what is called expert leadership. Consequently the power of determination comes to be considered one of the specific attributes of leadership, and is gradually withdrawn from the masses to be concentrated in the hands of the leaders alone. Thus the leaders, who were at first no more than the executive organs of the collective will, soon emancipate themselves from the mass and become independent of its control.

Organization implies the tendency to oligarchy. In every organization, whether it be a political party, a professional union, or any other association of the kind, the aristocratic tendency manifests itself very clearly.”

If Trump wants to play president, he has to play ball.

Trumped by the Deep State

Thus elected, populist “tribunes” like Trump are ultimately no match for entrenched technocrats nestled in permanent bureaucracy. Especially invincible are technocrats who specialize in political force and intrigue, i.e., the National Security State (military, NSA, CIA, FBI, etc). And these elite functionaries don’t serve “the people” or any large subpopulation. They only serve their own careers, and by extension, big-money special interest groups that make it worth their while: especially big business and foreign lobbies. The nexus of all these powers is what is known as the Deep State.

Trump’s more sophisticated champions were aware of these dynamics, but held out hope nonetheless. They thought that Trump would be an exception, because his large personal fortune would grant him immunity from elite influence. That factor did contribute to the independent, untamable spirit of his campaign. But as I predicted during the Republican primaries:

No matter how popular, rich, and bombastic, a populist president simply cannot rule without access to the levers of power. And that access is under the unshakable control of the Deep State. If Trump wants to play president, he has to play ball.

On these grounds, I advised his fans over a year ago, “…don’t hold out hope that Trump will make good on his isolationist rhetoric…” and anticipated, “a complete rapprochement between the populist rebel and the Republican establishment.” I also warned that, far from truly threatening the establishment and the warfare state, Trump’s populist insurgency would only invigorate them:

“Such phony establishment “deaths” at the hands of “grassroots” outsiders followed by “rebirths” (rebranding) are an excellent way for moribund oligarchies to renew themselves without actually meaningfully changing. Each “populist” reincarnation of the power elite is draped with a freshly-laundered mantle of popular legitimacy, bestowing on it greater license to do as it pleases. And nothing pleases the State more than war.”

Politics, even populist politics, is the oligarchy’s game. And the house always wins. For the people, the only winning move is not to play.