In medieval times, taxpayers in England’s St. Peter’s parish were required to subsidize parishioners of St. Paul’s who fell behind in providing support for the established church in their region. At least that’s how the story goes. Put another way, the good folks in Paul’s didn’t mind at all when those in Peter’s were fleeced. And so “robbing Peter to pay Paul” entered the vernacular, according to one interpretation of the phrase’s origin.
Whatever the origin, it is safe to say that Paul will generally support higher taxes on Peter that seem to improve Paul’s well-being. Any politician who pushes such schemes can count on getting Paul’s vote. The point was communicated endlessly in the press in recent coverage of the fiscal cliff debate. Time and again, a news story would say something like this: “[S]ixty percent of registered voters in a new Politico/George Washington University poll said they support increasing taxes on households earning more than $250,000.” Well, duh. Sixty percent of registered voters no doubt make less than $250,000.
Paul smiles as he goes to the bank. Meanwhile, Peter frowns.
Tension between those who support expansion of the welfare state and those who seek to constrain government’s growth is as old as the republic. Politician John C. Calhoun in 1810 famously described the welfare state problem this way:
[I]t must necessarily follow, that some one portion of the community must pay in taxes more than it receives back in disbursements; while another receives in disbursements more than it pays in taxes . . . The necessary result, then, of the unequal fiscal action of the government is, to divide the community into two great classes; one consisting of those who, in reality, pay the taxes, and, of course, bear exclusively the burthen of supporting the government; and the other, of those who are the recipients of their proceeds, through disbursements, and who are, in fact, supported by the government; or, in fewer words, to divide it into taxpayers and tax consumers.
Calhoun might not have gotten away with saying such things in 2012, but his quote does have a little more finesse than Mitt Romney's “47 percent” remark during the 2012 presidential election.

Looking at the Data 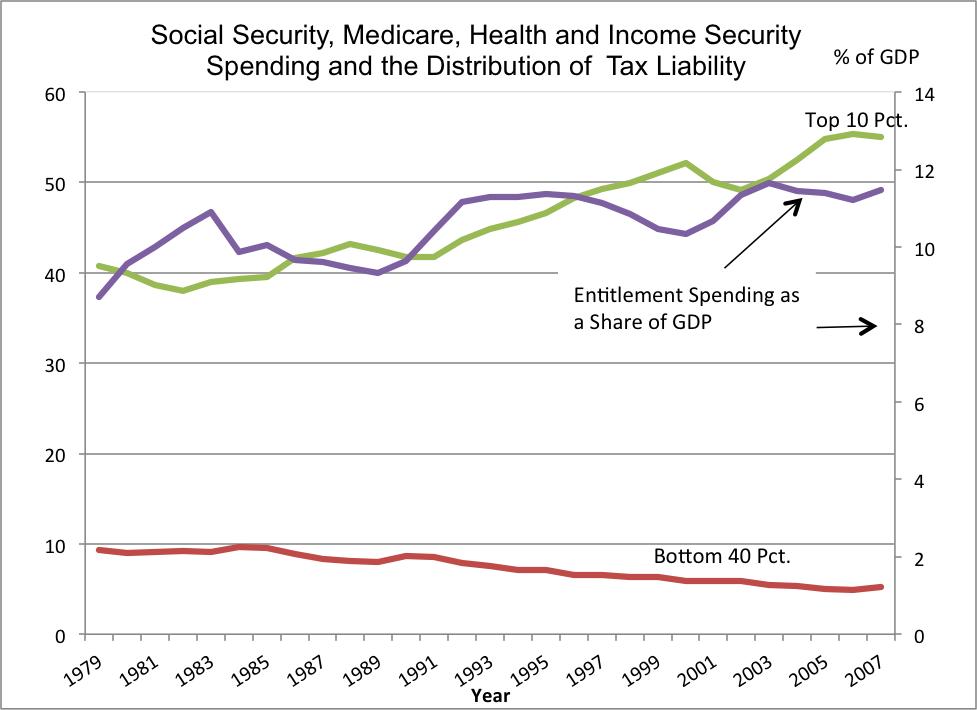 We thus seem to have a systemic problem. Robbing Peter to pay Paul is built into the system.

We’re not quite there yet. But the U.S. political economy is quickly approaching the tilting point at which there are more income tax spenders than tax payers. If we could somehow include transfers made by regulation and government grants in the calculation, we might find that those on the receiving end far outnumber the net tax payers. If we looked even closer, we might discover that we are all net losers. Our ability to produce new wealth may be compromised to the point that though transfers come our way, the gains received are added to an ever-diminishing income stream. John C. Calhoun’s deepest fear regarding a divided country may have been realized.
Robbing Peter to pay Paul may be a delightful idea so long as Peter produces new wealth at an ever-increasing pace. That is no longer the case. Maybe it is time for Peter and Paul to pull their own weight.