The Origin of Specie, Pt. 1

The Case Against Public Money

What role should the public sector play in an economy’s monetary framework? In other words, should money be provided by the market or by the government? Economists have been wrestling with such questions for centuries, but since the financial crisis and the ensuing recession, the question has become increasingly important. We are at a crossroads.

Despite the general market orientation of developed countries across the globe, all have rejected a laissez-faire approach to money. And all assign to public agencies, most notably central banks, the provision and oversight of money. The various rationales for doing so rest on a number of unsound premises and questionable reasoning, which I’d like to cover briefly.

One primary argument against market-provided money is that money is a “public good.” Public goods, the argument goes, are inadequately provisioned when such provision is left to voluntary arrangements. Without a public authority underpinning the stability of the monetary framework, that framework would be underdeveloped and unreliable. Money is essential to all economic activity beyond bare subsistence-level production; an advanced division of labor is inconceivable without some way of comparing resource allocation along various lines of production, and money provides the common denominator with which such comparisons can be made. Therefore, it seems especially important that the guiding hand of government is active in staving off money mischief.

The chief problem with this argument is that money is not a public good.

Both professional economists and laypersons have an unfortunate tendency to be sloppy with their terminology when it comes to identifying public goods. Public goods are traditionally defined as being both non-rival and non-excludable in consumption. Non-rival means an individual’s consumption of that good does not diminish anybody else’s ability to consume it as well; non-excludable means it is infeasible to prevent those who do not pay for the good from enjoying its benefits, because such exclusion is prohibitively costly. 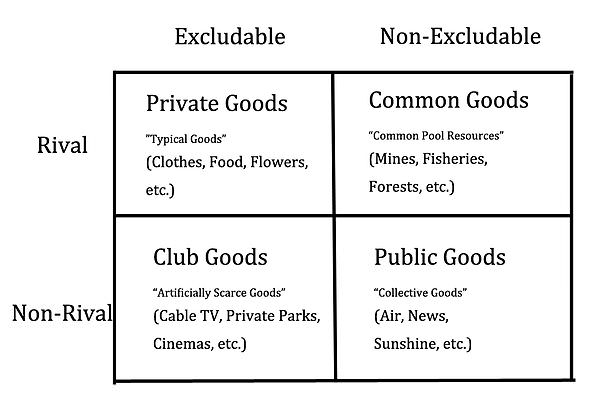 Is money non-rival?  It seems obvious that if I am “consuming” a dollar (buying a dollar’s worth of goods and services), those benefits accrue to me, and thus others cannot consume that same dollar. Is money non-excludable? This one is trickier. It appears as though money is non-excludable, because the existence of an advanced economy characterized by widespread indirect exchange (i.e., the use of money, as opposed to barter) benefits everybody who might wish to partake of that economy’s fruits. But the same can be asserted about the existence of a flourishing automobile market. That everybody enjoys the benefits associated with being able to buy a new car whenever they wish does not mean that cars are non-excludable, because the car dealer can always turn down a trade with potential customers. The same is true of money. It is, in fact, quite feasible to exclude somebody from the relevant benefits of the monetary framework: One simply refuses to exchange goods with that person. Thus money, being both rival and excludable in consumption, does not meet the traditional requirements of a public good.

Let’s turn to a related but different argument. It turns out that when most people categorize something as a public good, what they mean is that the good comes with positive externalities. This means that the use of that good involves the creation of uncompensated benefits for society at large. These benefits, precisely because they are uncompensated, are unable to incentivize the producers of that good to supply the “correct” amount. As such, we expect “too little” of this good to be produced.

Applied to money, this means that the government needs to step in to make sure the correct amount of the good—the amount consistent with taking into account the uncompensated benefits to society—gets supplied.

But this argument is also suspect. To paraphrase Ludwig von Mises, money is nothing more and nothing less than the most saleable good in an economy. Its role is as a facilitator of exchange, and its value comes chiefly—or entirely, as in the case of fiat money—from its ability to fulfill that role. If somebody could wave a magic wand and double the number of computers or insulin or hot dogs in an economy, the populace would clearly be better off because there would be more goods for them to consume.

But they would not be any better off if the waving of that magic wand doubled the amount of money in an economy, because all that would result would be a general increase in prices. While it makes sense that an individual is better off if he or she acquires more money, the same is not true for the economy as a whole. From this it is obvious that, beyond some minimal amount to facilitate transactions, increasing the supply of money cannot increase welfare. Thus it seems that worries about money being undersupplied are unfounded.

As we have seen, uncritical declaratory statements concerning the “publicness” of money do not pass muster. At the same time, it is important to realize that there are much more sophisticated arguments for government involvement in the monetary framework. Such arguments, which are beyond the scope of this article, frequently have to do with business cycles, money as a network good, and issues associated with marginal cost pricing of fiat money. These arguments can and should be addressed, but it is far more important that the general level of discourse on monetary issues be raised by ferreting out and rectifying common misconceptions about the relationship between government and money.

In part 2, I will make the case for private money.

Alexander William Salter is an associate professor of economics in the Rawls College of Business at Texas Tech University, the Comparative Economics Research Fellow at TTU’s Free Market Institute, and a senior fellow with the American Institute for Economic Research’s Sound Money Project. Follow him on Twitter @alexwsalter.