The Myth That the Polar Bear Population Is Declining

The story of a resurgent polar bear population deserves to be told and applauded.

Many of us watched the viral video in horror. A starving polar bear scavenging for food on barren land, his ribs visible beneath a jaundiced white coat.

“This is what climate change looks like,” said National Geographic.

The magazine explained that because of melting sea ice, precipitated by climate change, more of these mammals are starving. They pointed to a new study in Science suggesting that polar bears require much greater caloric intake in their diet than previously believed.

The video, shot by photographers Paul Nicklen and Cristina Mittermeier on Somerset Island, sparked outcry over the decimation of polar bears due to global warming.

While many remember the footage of the polar bear, fewer are aware of what followed.

As Michele Moses recently explained in The New Yorker, scientists accused National Geographic of “being loose with the facts.” There was no evidence, many pointed out, that the bear’s condition was the result of climate change. The bear simply could have been old, ill, or suffering from a degenerative disease.

Mittermeier admitted as much a year later.

“I can’t say that this bear was starving because of climate change,” she wrote in National Geographic.

Perhaps we made a mistake in not telling the full story—that we were looking for a picture that foretold the future and that we didn’t know what had happened to this particular polar bear.

The Polar Bear as a Symbol

Mittermeier was looking for visual evidence of the future she imagined, one ravaged by climate change. And she found it that day in a starving bear.

As Moses of The New Yorker points out, polar bears have become an “indisputable image of climate change.”

“The story of climate change has been told, in part, through pictures of polar bears,” Moses writes. “And no wonder: in their glittering icy habitat, they reflect the otherworldly beauty that rising temperatures threaten to destroy.”

That picture of a single starving bear arguably did more to advance the issue of climate change than any white paper or IPCC report could have. Unfortunately, the footage tells us relatively little about the actual state of the polar bear population.

What the Numbers Say

While you’ll find no shortage of headlines declaring that polar bears face extinction, the numbers tell a different story.

The State of the Polar Report 2018 put the new global mid-point estimate [of the polar bear population] at more than 30,000.

In fact, though polar bears were placed under the protection of the Endangered Species Act in 2008 over concerns that its Arctic hunting grounds were being reduced by a warming climate, the polar bear population has been stable for the last three decades.

In 1984, the polar bear population was estimated at 25,000. In 2008, when polar bears were designated a protected species, The New York Times noted that number remained unchanged: “There are more than 25,000 bears in the Arctic, 15,500 of which roam within Canada’s territory.”

Even accepting the lower figure, the estimate is the highest since the polar bear became internationally protected in 1973. 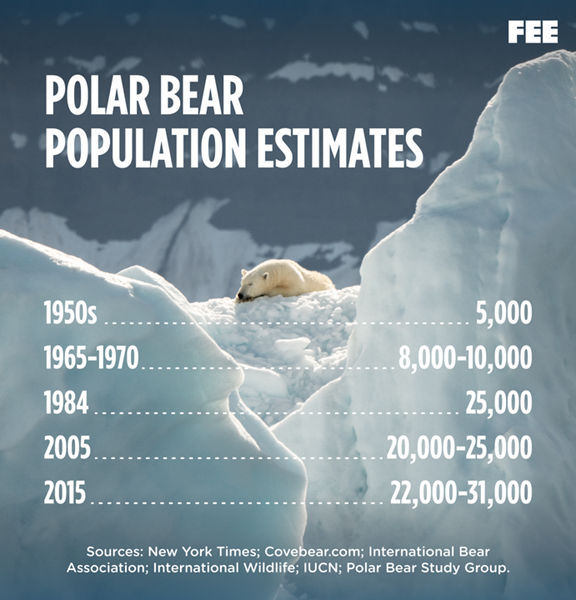 The health of the polar bear population runs counter to predictions from scholars who have said two-thirds of polar bears will disappear in coming decades because of warming temperatures and melting sea ice in the Arctic.

The good news that polar bears are thriving is unlikely to draw as much attention as images of a starving polar bear scrounging for food on Somerset Island. Nevertheless, the story of a resurgent polar bear population deserves to be told and applauded.