The MTA Loses Six Billion Dollars a Year and Nobody Cares

New York City is the center of capitalism and financial markets. However, hiding underneath the towering skyscrapers is an organization that defies the free market forces by siphoning off increasing amounts of city and state taxpayer dollars. This organization is the Metropolitan Transport Authority (MTA), which loses on average more than $6 billion per year, dating back to 2009. If the MTA were a company in a functioning free market, it would have filed bankruptcy and restructured a decade ago. Instead, the city and state increase taxpayer subsidies and debt year after year while acquiescing to union demands, resulting in one of the highest-costing, least productive transit systems in the world.

When Cost of Labor Is Greater Than Total Revenue

Salaries, benefits, and retirement at the MTA are out of control. In 2015, the MTA spent $9.85b on employee salaries, retirement, and post-employment benefits. This is one billion dollars more than the $8.4b in total revenue the MTA collected. Before paying any other business expenses, the MTA is already losing money.

Based on employee costs alone, the MTA is already losing money.An analysis of MTA salary data on seethroughny.net, excluding salaries below the lowest contractual union wage, shows that out of 62,507 MTA employees, the average 2015 salary was $89,779. The vast majority of these employees are bus operators, train conductors, station agents, maintenance personnel, and cleaners. Analysis conducted on 2010 salaries of bus/rail operators and maintenance personnel shows that MTA salaries range from 18% to 60% higher than other US metro systems (i.e. Chicago, SF, LA, Miami) with very few exceptions.

Because the MTA Bus Company did not provide its overtime accounting, total overtime in 2015 is actually greater than $876m. This number is even more egregious when you consider that only a subset of roles is responsible for the vast majority of overtime due to union constraints and inflexible work rules that will be detailed in a later section. Exhibit 1 below shows that in 2015, there were three hourly employees who worked so much overtime they grossed a higher salary than the MTA Chairman, Thomas Prendergast. 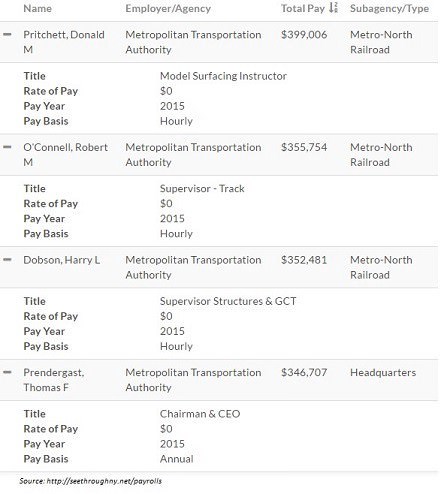 The $876m overtime bill in 2015 represented 15% of payroll, which is nearly double the 8% benchmark of average private nonfarm manufacturing overtime tracked by the US Bureau of Labor Statistics. In 2010, when the MTA’s total overtime bill was $560m, or 13% of payroll, the MTA vowed to crack down. However, the overtime issues have only been exasperated.

Truancy resulting in last-minute scheduling is a large driver of overtime at the MTA. Over a quarter of MTA employees use more than 15 sick days per year. This is in addition to the 20 annual vacation days employees receive after three years of service. Employees also receive their birthday as a holiday.

There’s a certain percentage of employees who take the mental health day. They wake up and say ‘I don’t feel like working today.’ -Thomas Prendergast, Current MTA Chairman

Excessive usage and abuse of the Family Medical Leave Act (FMLA) is another driver of unplanned absences. Once an employee is approved under the act, he or she may take up to 60 unplanned/unpaid sick days per year. FMLA usage is not periodically reported by the MTA, however is 2010 it was revealed to be at 9% in the bus division and 20% in the Staten Island bus division.

MTA Employees Do Not Have a “Cadillac” Health Plan, It’s a Porsche

The MTA’s health and dental coverage is among the best of all comparable US transit systems and corporations. MTA employees pay 2% of their gross pay, excluding overtime, for health insurance. While the cost for an individual employee is in-line with the US average, the contribution for a family is significantly subsidized as seen in Exhibit 2 below. After paying the 2% salary contribution for insurance, MTA employees pay virtually nothing for any medical services for the entire family, with the exception of a $15 co-pay. Comparatively, the Chicago Transit Authority (CTA) has a deducible and 10% co-insurance, and the Los Angeles MTA has a very small deductible, but 20% co-insurance.

Exhibit 2: Comparison US metro health coverage vs US national average

Not to be outdone by the MTA’s health insurance plan, the MTA’s dental plan is even better. Employees pay no premium and the plan covers 100% of all procedures including crowns, root canals, and surgery up to $1,800 per person per year, and full orthodontics for 24 months.

When adding in the cost of health and dental insurance premiums, the average salary of an MTA employee exceeds $100,000, without even considering pension costs. 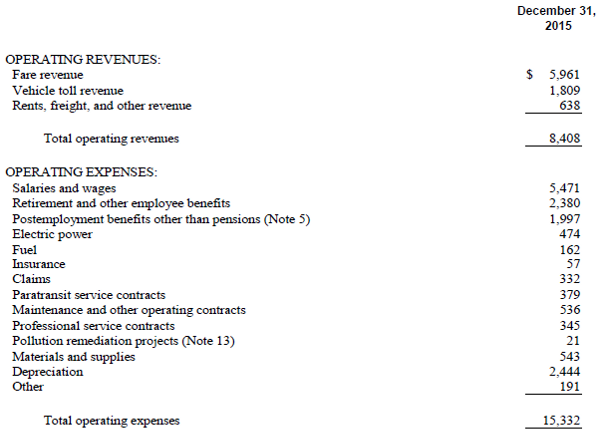 In the current state, the MTA is able to cover these costs with subsidies from the state and city government. However, in the future, either subsidies will be drastically increased resulting in higher taxes, or fares will increase faster than inflation. As of November 2014, the MTA had a $17.8b unfunded liability for post-employment benefits, and then reallocated and suspended future contributions to the reserve in order to pay for the new union labor agreement. There are also several underfunded pensions, including the LIRR pension that had a funding level of 26.8 percent as of Jan. 1, 2012. An 80 percent level is considered optimal for funds to be able to pay future claims.

The Transport Workers Union (TWU) has a rich history, starting with its founding during the Great Depression when the private transit companies were abusing the nations dire situation, which consisted of underpaying, overworking, and mistreating their employees. Today many of these issues have been rendered moot thanks to increased transparency in the work place, government protections combined with an accessible justice system, and a wide variety of available jobs. Over the years, the union has grown in power with its ability to shut down the city of New York, resulting in capitulation by management and the city and a plethora of work rules that stifle productivity.

Cost of construction for the MTA is 2–7 times more expensive than any comparable subway system in the world.

The MTA employs 25 people for work that Spain does with nine.The extension of the 7 line from Times Square to the Javits Center cost $1.6 billion per mile. It would be the most expensive in the world if not for the first phase of the Second Avenue subway, which is estimated to cost $2.7 billion per mile of new tunnel. Compare this to the cost of other new tunnels worldwide in London, Tokyo, Berlin, and Paris, which cost respectively $700m, $560m, $400m, and $368m per mile. What is this discrepancy attributed to? According to Michael Horodniceanu, president of the New York City Metropolitan Transportation Authority’s capital construction division: “work rules.” Citing the example of the city’s revered sandhogs, he said the MTA employs 25 people for tunnel-boring machine work that Spain does with nine.

By structuring pay raises based on tenure, capping after five years, union employees are not incentivized to work any harder than a level just above what would result in termination. The average tenure of an MTA employee is 13.8 years, far above the national median of 4.6, which demonstrates how “good” of a job this is. In the past, the MTA attempted to tie pay to performance, but the union rejected it. This generalization does not apply to all employees, as some want to progress to higher roles.

The concept of excessive conductors is a multi-faceted issue that has present and future implications. Currently, the LIRR has conductors that punch every rider's ticket. This process became obsolete last century from the use of turnstiles or the honor system along with heavy fines for dodgers, as in Europe. Also, there are several train lines, such as the L, that have an advanced driving system requiring only one operator. In 2005, the MTA removed the second conductor from the L, but the union forced the MTA to bring the second conductor back. For 11 years, taxpayers have paid for someone who does absolutely nothing on the L train.

The future ramifications are more drastic. Around the world, over 15 subway systems have at least one fully automated line, including systems in Malaysia and the Philippines. The MTA currently has approximately 7,000 train conductors and operators being paid an average salary of $100,000 including benefits. If the MTA were to invest in driverless trains, they would save $700m annually, not including future pension and post-employment costs.

Overtime for shifts over eight hours is a significant contributor to the nearly $1b overtime bill the MTA had last year. There are a significant number of professions that allow, if not require, work days over eight hours (e.g. medical professionals, truck drivers, construction workers, call service reps, EMTs, ect.) and do not pay overtime unless the employee exceeds 80 hours over two weeks. Due to the nature of transit and overnight maintenance, 12 hour shifts are required for many jobs at the MTA.

Other examples of inflexible and inefficient union rules:

…this is only a sample. The number of rules and constraints set forth by the collective bargaining agreement is substantial. One can only speculate how many billions of dollars it costs the taxpayers of New York City and State.

I think we have a series of work rules and practices that have developed over many years that are all about how people effectively get paid for not working.

Increasing Debt and Taxpayer Subsidies Are Keeping the MTA Afloat

Knowing that the MTA loses more than $6 billion per year, one may wonder, “Why aren’t they bankrupt?” or “Where are they getting the money to pay for this?” The answer is a combination of debt and government subsidies.

Currently the MTA has $34.5b debt. This is more debt that that of approximately 30 countries. In 2015, debt service cost $2.2b, which represented 17% of its $13.5b operating budget. The MTA is solely reliant on subsidies and would default on their debt if subsidies were ever not approved. The increasing debt and debt service requires increasing subsidies every year. New York City and State taxpayers subsidized over $5.5b in 2015, double the $2.8b in 2004. 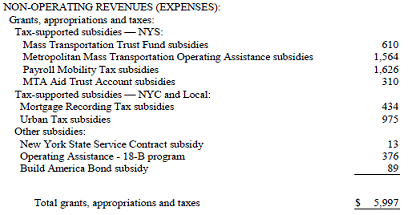 In 2015, New York State and NYC gave the MTA subsidies of $4.1b and $1.4b, respectively. By dividing the subsidies by the number of taxpayers in NYS and NYC, each state taxpayer paid a $459 subsidy and each city taxpayer paid a subsidy of $825 (includes state subsidy).

While it might seem fair to pay $2.75 for a ride on the metro, the hidden cost is in your tax bill. In effect, New York City and State residents are subsiding the cost of the subway for tourists and lining the pockets of the MTA union.

Excerpted from the author's Medium blog under a Creative Commons BY license.