As a case against immigration, it is numeric nonsense.

Donald Trump Jr. is set to dominate this week’s news cycle (or at least dominate a good part of the internet) with his recent tweet comparing Syrian refugees with poisoned Skittles. 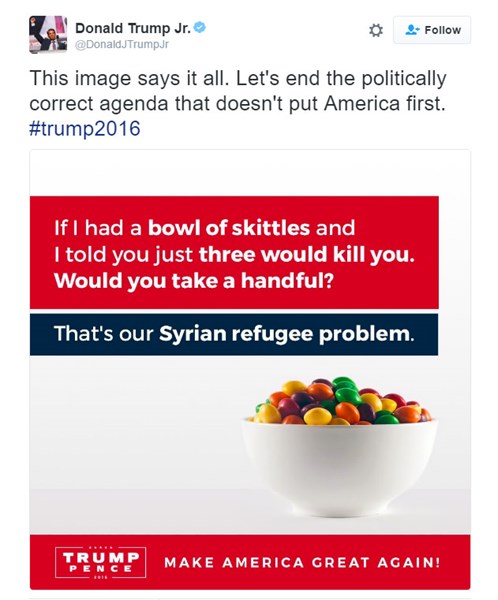 Trump Jr. didn’t originate this meme. It’s been floating around Twitter for at least a year in one form or another. The analogy, that one poisoned candy can destroy a nation, goes back to at least the 1930s and Nazi Germany, where the deadly food item was a toadstool.

But the Trump name has given the meme much more exposure than it had before his tweet, and that exposure has created a predictable backlash. Twitter has exploded with re-tweets and ridicule. The Wm. Wrigley Jr. Company, makers of Skittles, responded simply, “Skittles are candy. Refugees are people.”

The Odds of Being Poisoned

Many people responding to the meme have concentrated on the odds of eating one of the poisoned candies. For example, Alex Nowrasteh of the Cato Institute calculated that, based on the number of refugees and foreign-born terrorists in the US, the odds of an American being killed in an attack are one in 3.64 billion per year. The point of this rebuttal is that the odds of being killed by a refugee-turned-terrorist are so small such violence shouldn’t be a top concern.

Pointing out the odds of eating one poisoned candy is also ineffective because it concentrates only on the risks involved. Someone could easily argue that odds of 1 in 3.64 billion per year are still too high a price to pay for allowing refugees into the country. This would lead to impasse with neither side being able to rebut the other.

There is another argument, though. There are more than just poisoned candies in that bowl. There are also rare Magic Skittles which grant anyone who eats them incredible powers, like gaining wealth and fame from creating a world-changing product. That’s exactly what happened to Steve Jobs, co-founder of Apple and son of a Syrian refugee (except for the Magic Skittles part).

Looking at the potential benefits of those candies changes the argument considerably. Instead of focusing on the risk of death, the debate shifts to how big a risk we are willing to take to get the next iPhone. How many poisoned candies are worth the chance of getting one of those Magic Skittles?

The argument is even stronger, though. There are more than just those incredibly rare Magic Skittles in the bowl. Almost every candy that isn’t poisoned offers some small benefit to whomever eats it. That candy might not make you as rich as Steve Jobs, but the cumulative effects of eating millions of those candies will improve your life immeasurably.

The US experience with Vietnamese refugees shows the effects of those more common, slightly Magic Skittles. Most of those refugees arrived in the US poor, unable to speak English, and with few marketable skills. Yet in a few generations, those refugees and their children have created thriving communities, founded many businesses – including the ubiquitous nail salons and delicious bahn mi shops – and have a higher average income than the average immigrant population.

As Nowrasteh and others have pointed out, the Poisoned Skittle argument is numerical nonsense. It also ignores the Magic Skittles both large and small that are in that bowl. Unlike a normal bowl of candy, the more you eat from this bowl, the healthier you will become.

Steve Fritzinger is a business consultant in the Washington, D.C., metro area.