The Power of Habeas Corpus in America

Anthony Gregory. The Power of Habeas Corpus in America: From the King’s Prerogative to the War on Terror. New York: Cambridge University Press for The Independent Institute, 2013. 420 pages. 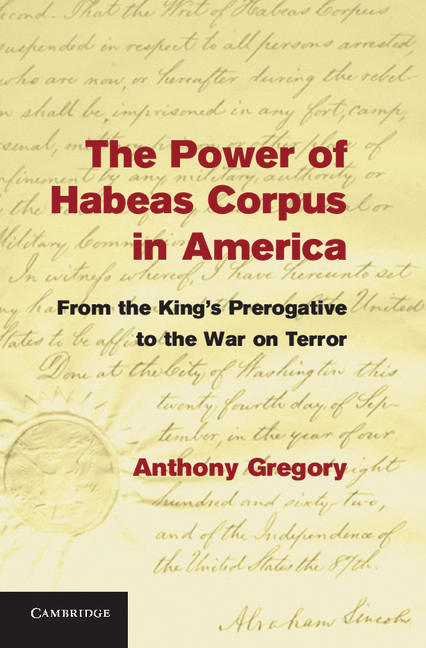 Sir William Blackstone, whose jurisprudence so influenced the American founders and the course of American history that his four-volume book, Commentaries on the Laws of England, continues to sell more copies in the United States than in England, once called the Great Writ “the most celebrated writ in the English law.” The American colonists who studied and praised Blackstone believed that, as Englishmen, they were entitled to the protection of certain fundamental rights, which the British government, under King George III, had selectively recognized and in some cases disregarded in the colonies.

The right not to be detained against one’s will without a hearing or notice of the accusations against him had been recognized for centuries and formed the basis for the writ of habeas corpus. In 1215, King John signed the Magna Carta, which expressly prohibited him and his royal successors from imprisoning, disseizing, committing, or banishing freemen who had not received a judgment of their peers pursuant to the laws of the land. This principle received renewed expression in the Petition of Right during the reign of Charles I and, later, in the Habeas Corpus Act, which called for speedy recourse in the event of an unlawful detainment. The habeas remedy then passed from England to America by way of the common law, and none other than Thomas Jefferson declared, “Habeas Corpus secures every man here, alien or citizen, against everything which is not law, whatever shape it may assume.”

Nevertheless, Anthony Gregory ably demonstrates in The Power of Habeas Corpus in America that the Great Writ has a spotted and inconsistent history as well as a reputation for hope and freedom that does not align with stark expectations or reality. “Questions have reverberated from England to the United States,” Gregory submits, “over who has the authority to suspend the writ’s privilege and the very meaning of suspension itself. In our own time, no less than in past generations, jurists and scholars have labored to determine who enjoys the writ’s protection, which executive officials must answer to which courts or judges, what defines habeas jurisdiction, and whether its boundaries should shift during emergency.” These vexing questions have become more urgent and complex in a shrinking world burdened with threats of terrorism.

Gregory’s scope is wide. He maps more than 400 years of legal history in roughly 400 pages and reminds us that the origin of the habeas remedy was not libertarian: “The king’s courts developed habeas corpus to centralize judicial authority and collect revenue.” His impressive sweep of history recognizes that “it took centuries before the writ was genuinely turned against the king’s oppression.” Ever since the Norman conquest, if not earlier, the writ of habeas corpus has been tied to royal or governmental prerogative. In the seventeenth century, in fact, the writ served as a procedural mechanism for ensuring that prisoners remained in prison rather than being released from prison; in our present era, the government has been able to circumvent the writ to indefinitely detain prisoners captured in the war on terror.

Michel Foucault made a career out of analyzing the paradoxical nature of power—that is to say, the ways in which the State enables forms of liberty in order to demonstrate its ostensibly unrivaled authority to suppress that liberty. Gregory adopts a similar approach, describing how prisoners petition for the writ and how courts and custodians respond. “For every vindication of a custodian’s power,” Gregory explains, “the authority to detain is upheld. For every undermining of a custodian’s power, there is the affirmation of another official’s power—a judge’s power, to say nothing of the state’s general power to decide whom to detain.”

This Foucaultian line of reasoning surfaces elsewhere in the book and provides a profound challenge to libertarians who would dismiss Foucault’s thinking out of hand. In an astute and potentially groundbreaking moment, Gregory briefly discusses Foucault vis-à-vis the theories of Robert Higgs, Murray Rothbard, and Franz Oppenheimer; the connection between these men might surprise those unaware of the fact that Foucault himself, late in his career, advised his students to read Mises and Hayek.

At once a tool of liberation and authority, the writ of habeas corpus undermines State authority even as it validates and solidifies that authority. In other words, it enables the very power that it subverts. Because it destabilizes institutionalized power ultimately to sustain that power, the writ is, in Gregory’s words, “mythical” and retains an “idealistic mystique.” That makes it all the more important not just to trace the history of this storied remedy, but to “demystify” it and expose it for what it is: a “tool of usurpation and centralization.” In this regard, Gregory’s book is not merely a history but a call for awareness.

If Gregory’s Foucaultian method is successful, as I believe it is, then it should cause productive irritation among libertarian jurists and jurisprudents who appear to be moving toward stodgy consensus on a number of pressing legal issues. It might be that other pet favorites of these legal libertarians—say, incorporation of the Bill of Rights against the states—are really short-term techniques serving as vehicles to long-term, centralized power. That is not to accuse any particular libertarian of having bad intentions, only to suggest that good intentions can be bound to discursive systems that we do not fully understand. Power is dangerous not because it’s obvious, but because it develops gradually out of good intentions and seemingly innocuous actions. All students of spontaneous order ought to know better than to design or embrace abstract legal theories that endow the instrumentalities of a centralized State judiciary with more nationalized powers, even if those powers seem, at first blush, favorable to liberty.

Sometimes it takes a non-lawyer like Gregory to remind lawyers of the philosophical implications of the practical and everyday functions of the law. Likewise, it takes a philosopher, again like Gregory, to show that a series of small legal victories is really one big loss in a larger scheme. Although focused on a single issue—the writ of habeas corpus—Gregory’s book has potentially vast ramifications for all areas of libertarian jurisprudence. It is a timely corrective and an impassioned warning to libertarian lawyers, think tanks, and policy analysts who have lost their way and in the name of liberty brought us deeper into statism.

Yet the question remains: What is a better alternative to the Great Writ that could protect individual rights against unwarranted detention and at the same time avoid the production of power? Gregory doesn’t answer this question, but he does suggest that if the writ is to be a liberating remedy, society itself must be more libertarian. In other words, the writ is worthless in a society that does not value freedom; it is a tool that can lead to oppression or liberty, depending on the prevailing ethos of the time and place.

Therefore, for the writ to be an instrument for good, society writ large needs to shift its values toward libertarianism. Of course, that solution pertains to all social problems and would remedy any number of governmental harms. Gregory may not have indicated specific alternative remedies that could replace the Great Writ, but he has shown us that received opinion about government-backed protections can impede our search for liberty.