The First Congresswoman Was the Anti-Hillary Clinton

For days, newspaper headlines and cable news bulletins have blared news of Hillary Clinton's historic primary victory, making her the first woman ever to be nominated by a major American political party. This is truly a remarkable moment.

But 2016 is notable for another reason, as my friend Sean Rosenthal recently pointed out: it is the centennial anniversary of the election of the very first woman ever to hold national office.

One century ago in 1916, a few years before women received the constitutional right to vote through the 19th Amendment, Jeanette Rankin made history by becoming the first woman elected to the House of Representatives.

Shortly after her election, the United States government voted to declare war against Germany and to commence its involvement in World War I. Jeanette Rankin voted with a few dozen other members against the war, and she was not reelected because of it.

In 1940, 24 years later, she was elected again just before World War II. Shortly after her election, she was the only vote against entry into World War II, and she was not reelected because of it.

When commenting on her anti-war voting record, Rankin said: "I felt the first time the first woman had a chance to say no to war, she should say it." She had real character that cost her elections and deserves praise for it.

Rankin was hounded, harassed, and pilloried for her vote. Her brother telephoned from Montana to tell her that her state was "110% against you." Dismayed but unrepentant she told him, "I have nothing left now except my integrity."

She continued to resist the pressure of her all-male colleagues, also refusing to vote for war with Italy and Germany. "As a woman," she said, "I can't go to war, and I refuse to send anyone else."

Nobody defended her, and nobody stood with her. But one paper, the Kansas Emporia Gazette, wrote all the more admiringly of her for it:

Probably a hundred men in Congress would have liked to do what she did. Not one of them had the courage to do it. The Gazette entirely disagrees with the wisdom of her position. But Lord, it was a brave thing! And its bravery someway discounted its folly.

When, in a hundred years from now, courage, sheer courage based upon moral indignation is celebrated in this country, the name of Jeannette Rankin, who stood firm in folly for her faith, will be written in monumental bronze, not for what she did, but for the way she did it.

76 years later, at least, we are not there yet.

Contrast this pacifist pioneer of women's rights with her latter day successor. Hillary Clinton's "only notable consistency in the last twenty years has been promoting virtually every American war and military action," Rosenthal pointedly writes. "Clinton is the anti-Rankin, seeking to be the first woman Commander in Chief to have a chance to say yes to war, and to say it."

Whether you agree with one, or both, or none of Rankin's votes, we should celebrate women ​like her, who made history in honest and ennobling ways, who had the bravery not to follow a multitude rushing to kill. She dared to say no to war, and she was willing to pay the political, personal, and social costs of standing by her beliefs. At the end of her short political career, she had her integrity. Will Clinton be able to say the same? 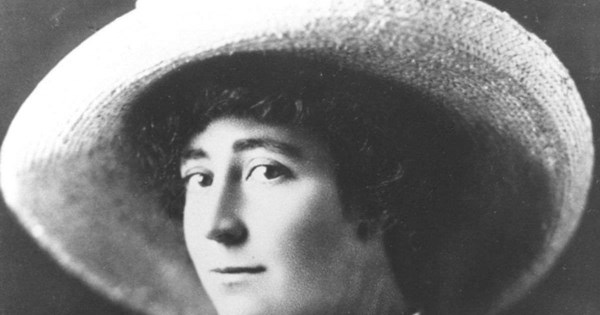 Read more about Rankin's career and biography on Wikipedia.