The Fall of Rome Began with the Abuse of Refugees 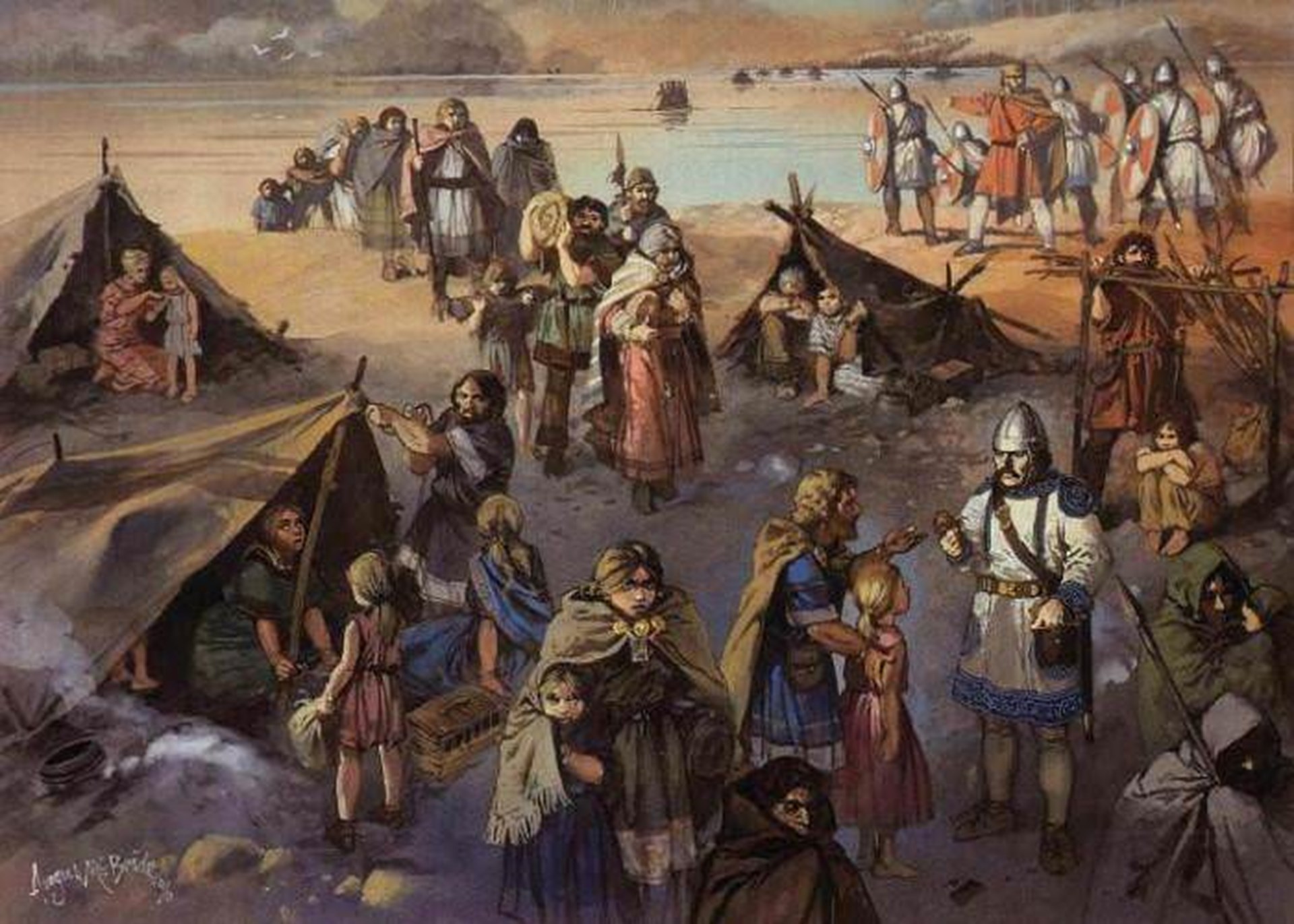 Those migrants, however, were not hostile barbarians who lusted to burn down Roman civilization. Instead, they were desperate refugees who wanted sanctuary within that civilization. A series of bad decisions and an uncompromising refusal to provide them with a dignified place in Roman society led to a series of events that would erase the Western Roman Empire from the map.

From Refugee Camp to Military Camp

In the summer of 376 A.D., an immense crowd of refugees arrived on the banks of Rome’s Danube frontier. Known as the Goths, they were mostly organized into two politically organized groups: the Tervingi and the Greuthungi, each with around ten thousand warriors.

As we shall see at the end of these events, those words were prescient.

Immigration, from the steady stream of individuals to full-scale migration, was common enough that the Romans had a word to describe the integration of asylum-seeking groups into the empire: receptio. When the Eastern Emperor Valens heard the news about the Goths’ arrival, he was in the East, in Antioch. As he was already in the middle of planning a campaign against the Persians, Valens decided to leave responsibility for the receptio to a garrison entirely too small for the task.

Even if the Romans had been entirely trustworthy, the receptio would have been a perilous affair. The Goths counted tens of thousands in number and supplies were  running low. However, the Romans were not trustworthy. Being the beneficent hosts they were, the Romans exploited the Goths’ desperation to line their own pockets. They were even so generous as to allow Gothic parents to sell their children into slavery in exchange for food.

The event that finally brought the Goths to arms was a banquet with the head of the garrison, Lupicinus, and the Tervingi king, Fritigern. Lupicinus used the opportunity to execute Fritigern’s attendants and to hold Fritigern hostage. Banquet shenanigans were a reliable tactic that the Romans used to neutralize bellicose barbarians. But once events began to spiral out of control outside of the banquet, Lupicinus let Fritigern go, spoiling the entire point of his stratagem. The Goths rioted. Order could not be restored. Before long, the Goths roamed freely through Thrace, doing whatever they cared to do.

Valens immediately marched back West with his best troops. The plan was simple enough. A joint campaign was planned with the Western Emperor to annihilate the Goths, returning the frontier to business as normal. Alas, politics got in the way of that simple plan.

Stilicho’s demise triggered a series of pogroms across Italy against the barbarians of the Roman military.

When he arrived in Constantinople, Valens found an unwelcoming populace on the brink of revolt. Even worse, hostilities with Germanic tribes broke out along the Rhine, so the joint Roman campaign would have to wait. However, Valens did not just want to sit around. He wanted to make a display of strength. He thought he saw the opportunity for such glory when reports came that the Tervingi were advancing alone to Adrianople. As his army outnumbered just the Tervingi, Valens thought he saw his opportunity.

In war, what a commander doesn’t know can get himself, as well as those he commands, killed. On the day of battle, Valens learned that lesson. He did not expect to find both the Tervingi and the Greuthungi at Adrianople. He was wrong. By the end of the day, both he and most of his army would lie dead on the field.

It is difficult to imagine the impact that the news of the Battle of Adrianople would have had for the Romans. An emperor was slain by barbarians, all of Thrace was now free for the taking, and the road to Constantinople was open. Not since Cannae in 216 B.C., when Hannibal had effectively massacred the Republic’s entire army, had the Romans suffered such a defeat.

With no options other than to negotiate, the new emperor, Theodosius, haggled out a peace that would provide the Goths with a semi-autonomous territory in the Empire. While negotiating that peace, Theodosius had even welcomed a dying Gothic king, Athanaric, to Constantinople and treated him as a king--even giving him a state funeral when he died.

After the war, the Goths largely retreated to the margins of Roman politics. Goths ended up serving in Theodosius’ army against the usurper Eugenius in 394. Those Goths also served as an integral part of the army of Stilicho, who all but ruled the Western Roman Empire as the generalissimo behind Theodosius’ son, Honorius. Like the many generalissimos of the late Western Roman Empire, Stilicho eventually found himself on the wrong side of court intrigue, motivated by the fear that the half-Vandal general sought to usurp the Empire for himself, and was executed in 408 A.D.

Stilicho’s demise triggered a series of pogroms across Italy against the barbarians of the Roman military. Whereas Stilicho had pursued a budding alliance with the Goths, his successors wanted to entirely exclude them from Roman politics.

The Goths were now in a precarious position. Yes, they had an army. But they also did not have any access to fertile land or allies in the imperial court. To prosper in the long run, they needed a modus vivendi with the Western Roman Empire. Their king, Alaric, had a bold idea, and they marched into Italy. Alaric hoped to force the issue by besieging Rome. He did not want to take the city. Instead, he wanted to compel Honorius to the negotiating table.

Alaric’s demands were that the Goths would be provided with a fixed amount of gold and corn per year, that they would be settled along northern Italy and the Adriatic coast, and that Alaric would be given an imperial generalship. The agreement would make the Goths rich and Alaric an important figure in the imperial court. However, the Roman court would not accept a barbarian among their ranks. Although willing to agree to Alaric’s former terms, Honorius rejected the latter.

Alaric returned to besieging Rome. Once again, he wanted to negotiate. However, en route to speak with Honorius, Alaric was ambushed by rogue elements in the Roman army that wanted war, not talk. Outraged, Alaric once again returned to Rome. But this time, Alaric had to carry out his threat, and, in 410 A.D, for the first time since 387 B.C., the Eternal City fell to a foreign enemy.

Today, we would be wise to learn from the Romans’ mistakes and treat the refugees that seek entry into our own societies as future allies, rather than as present enemies.

What followed may be one of the most gentle sackings of a city that history has record of. While only the fortress on the Capitoline hill survived the burning of Rome in 387 B.C., only the Senate House was burned in 410 A.D.. Although anti-climatic, that gentle sack of Rome emphasized the fact that Alaric saw himself not as a foreign conqueror, but as someone who wanted stakeholder status in the empire.

Alaric’s demands may have been grandiose, but the imperial government’s refusal to come to terms with Alaric only led to an awful situation being made worse.

Alaric would die of a fever months after the sack of Rome. Years later, the Goths would eventually be settled in Southwestern Gaul. Finally given stakeholder status, the Goths became valuable allies of the Romans in Gaul. They provided much-needed succor to a Roman garrison increasingly incapable of maintaining the integrity of the imperial borders.

The greatest joint Gothic-Roman achievement came during Attila the Hun’s invasion of Gaul. Ambrose was right: the Huns did pressure the Goths into seeking refuge in the Roman Empire, but events would not end there. In 451 A.D., the Huns attacked the Western Roman Empire. When Flavius Aetius, yet another generalissimo in the West, engaged them at the Battle of the Catalaunian Plains, he did so with the support of Fritigern and Alaric’s descendants. They would not achieve a decisive victory that day, but they would force the Huns back.

The Path of Peace

The Romans and Goths finally became allies, but only after generations of enmity and bloodshed. The original opportunity to transform the Goths into allies of Rome was squandered because of Roman arrogance and mismanagement, putting the Goths in a position where the only way to establish a place for themselves within the Roman Empire was to ultimately strike out and weaken that empire.

A beneficent and inclusive policy could have prevented the cascade of events that heralded the beginning of the end for the Roman Empire. Today, we would be wise to learn from the Romans’ mistakes and treat the refugees that seek entry into our own societies as future allies, rather than as present enemies.

Harrison Searles is an alumnus of the Mercatus Center MA Fellowship at George Mason University. Harrison earned a BA in Economics and Philosophy from the University of Massachusetts Amherst. He has attended Acton Institute’s Acton University and FEE’s Advanced Austrian Economics seminar. Additionally, he was the founding member and Secretary of the UMass Libertarian Club, and a member of the Undergraduate Economics Club.