The Enterprise of Law: Justice Without the State 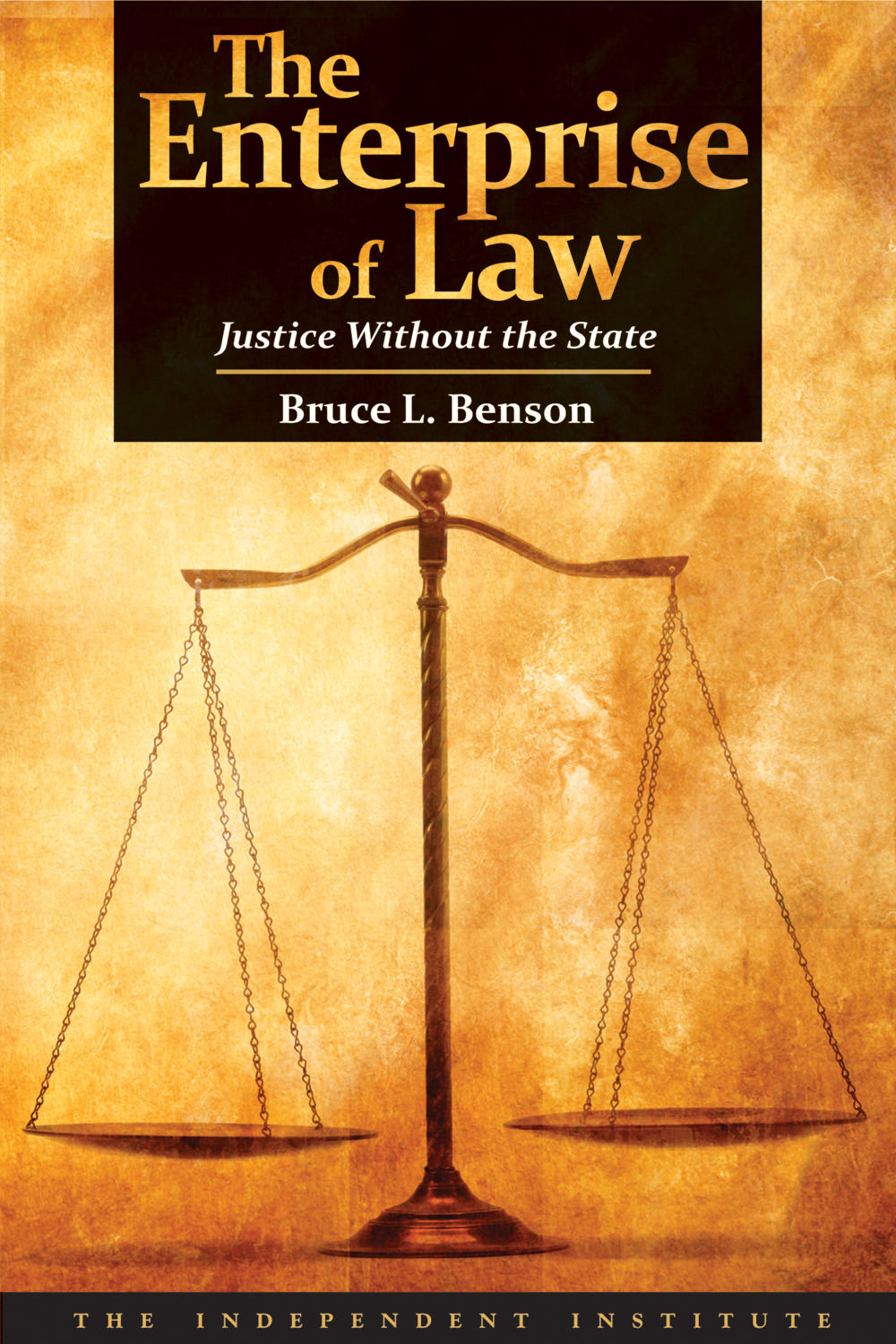 Nearly everyone agrees that a few core government functions —foremost among them the provision of law and justice—can’t be performed in a free market. A handful of rogue thinkers, however, questions this conventional wisdom.
Foremost among them is Florida State University economics professor Bruce Benson, who has been studying the issue for decades. His The Enterprise of Law, first published in 1990, has been republished and updated, with the intervening years only making it more essential.
“[P]eople’s disgust with many public legal institutions is greater today than it was in 1990,” Benson reminds us. The government produces many bad laws and does a poor job of enforcing the good ones. So why assume that law and justice—broadly covering personal and property protection, dispute resolution, trials, and punishment—can only be provided by the State? In fact, Benson’s research shows, the government’s system of law and justice is excessively costly, ineffective, and often quite unjust.
Benson begins with a history of the development of law and law enforcement that will surprise most readers.
“Our modern reliance on government to make law and establish order is not the historical norm,” Benson writes. “Public police forces were not imposed on the people until the middle of the nineteenth century in the United States and Great Britain, for instance, and then only in the face of considerable citizen resistance.”
Private parties used to enforce mostly customary law that had arisen in the community over time and proved to be valuable—not laws decreed by the monarch. Benson points to the Law Merchant, which was the set of rules that emerged over time to regulate dealings between traders. Often, those traders were in different countries and could not look to either commercial statutes (because they didn’t exist) or to government courts (because judges could not be trusted to understand the dispute and adjudicate it fairly). So merchants established, in spontaneous-order fashion, their own system, which functioned well for centuries.
Why, then, did the State come to dominate in law and justice? It was for the same reason that governments usually take over anything: a) they like control, and b) special interests stood to benefit from the takeover. Customary law and justice mechanisms did not fail; these were squelched by rulers intent on maximizing their power and wealth. Following the Norman Conquest, traditional Anglo-Saxon law based on restitution to victims was replaced by courts run by the Crown. Why? Primarily because the Crown collected fines that would go into the government monopoly’s coffers.
The old system of tort was swept away in favor of a criminal law system not because the people wanted it, but because the aristocracy did. Benson’s chapter on the changes in the English legal system from the time of the Norman Conquest to the 18th century is at once fascinating and depressing, as we see how today’s appalling system of criminal justice—frequently itself the source of further injustice—was cemented into place.
Applying public choice theory, Benson proceeds to show why our current legal system is focused far more on satisfying potent special interest groups than on providing the populace with optimal laws and enforcement. Laws criminalizing drug use, gambling, and other victimless crimes exist, he argues, because interest groups demand them; passing such laws imposes little cost on those interest groups, but huge costs on the rest of society. Moreover, the enforcers themselves constitute strong interest groups. The police, for example, push for a wider mission and bigger budgets. Not surprisingly, the numerous police, bureaucrats, and special agents who make their living off the war on drugs are among the most vigorous proponents of continuing it.
Among the serious harms we suffer as a result of the rise of authoritarian law is the fact that police and courts have become largely unaccountable to the public they are supposed to serve. Police regularly violate the rights of individuals during investigations and arrests, but it is very difficult for those who are injured to do anything about it. Occasionally, officers found to have violated the rights of people are suspended or terminated and evidence seized illegally will be excluded at trial, but neither does much to deter misconduct. Apropos of the exclusionary rule that prevents the use of illegally seized evidence during trial, Benson offers this observation: “From the point of view of government officials, an exclusionary rule is inexpensive. It does not cost tax dollars to release guilty felons….Citizen outrage over the government’s failure to convict and imprison criminals is directed at the courts and ‘their’ rules of evidence.”
Government laws and law enforcement are terribly inefficient. People are turning more toward private security and dispute resolution, despite the availability of “free” services in justice and law. Unfortunately, consumer preferences have little impact on existing institutions, which subsist on money extracted by taxation. Thus, the emergent law Benson so carefully describes probably won’t enjoy a renaissance any time soon.