I played hooky for a little while yesterday afternoon, and I don’t just mean that watching any of the five or six news channels I get is usually the equivalent of this:
What I mean is, I heard about the Boston Marathon bombing an hour after it happened, which these days seems like I’m sleeping on the news. Given all the commentary I came across, I kind of wish I had.
Instead I did the only thing you can do when something is breaking and nobody really knows what’s going on: I put on a news channel, fired up my iPad, and started trying to find details.
My search wound up being even more depressing than the actual story of the day. That was mostly just terrifically sad. 9/11 was terrifying, Oklahoma City was stunning, but I found myself, among other things, grateful that these bombs were relatively small.
I should explain that. I feel really terrible for the people involved—those who lost loved ones and limbs, people on the scene with no idea where they could flee to safety or what would happen next.
But I thought of the threat first because I live in New York. Nobody’s going to bomb my neighborhood unless Radio Rahim inspires a militant following. But a lot of people I love were working in Manhattan when this happened. Even if they were safe there, they’d have to cross the East River to get home, leaving them vulnerable on the bridges and in the tunnels.
So I was relieved that this situation didn’t suggest any wider threat, is all. That simply removed one ingredient from this . . . well, a kind of sandwich nobody would like to eat. What remained was still the kind of deep sadness that follows stories of great tragedies, like the Indian Ocean tsunami of 2004 or the Sandy Hook shootings.
It got worse when I went online. Within an hour of the blast, someone on YouTube had changed the title of a wholly unrelated video so that it was the first or second search result for “Boston Marathon bombing.” There might have been other people to do this as well. The disheartening thing is, there probably were.
The really disheartening thing is how many of the comments on this and even the actual, related videos—a swamp into which I normally don’t wander, but I was looking for any kind of information—had already concluded things like: every American deserves to feel this because of the actions of the U.S. military; or every American deserves to taste this kind of terror because people in some awful places, like Palestine or towns along the Thailand-Malaysia border (the list is, again depressingly, pretty long) have to live like this; or … well, I’m not going to repeat the kind of racism spat out by so-called patriots in this event.
Or maybe the really disheartening thing was how little any of this surprised me. It’s hard to say; we’ve got a real race to the bottom on our hands here.
It made CNN’s broadcast of the mindless blather of some ex-Congresswoman or another, audibly grasping for political platitudes in the absence of any useful information, seem tasteful and dignified by comparison. Even when she pleaded with Americans, in effect, not to start burning down mosques (the assumption that this is necessary, that this is what everyone’s just itching to do, is what galls me), it was no more than par for the course these days.
What really bothers me still, though, was how quickly a couple of conspiracy theorists started spouting the idea that this was a false flag operation. That is, that somebody (the CIA, or maybe the TSA, or possibly the Knights Templar) planted the bomb specifically to scare Americans into submission. The “evidence” mustered by what now looks like just one “source” is that the Boston Globe tweeted about a controlled detonation about a mile from the site of the two blasts, around an hour after the first bombs went off. That is, the bomb squad was doing exactly what it should be doing when they have reason to believe somebody planted a bomb: finding something that looked like (and, we were told later, actually was) a bomb and then destroying it before it killed or maimed anyone. And the city’s main newspaper spread the information around as widely and quickly as it could.
I kept finding the exact same story linked all over, often at the top of the Google results, while I searched for the Globe tweet and any further information about it this morning. I didn’t find any. That doesn’t mean it’s not out there, but it casts even more doubt on the spin the nutjobs were putting out. In fact, it’s pretty strong evidence that there’s no story here. The alternative—that only these conspiracy guys picked up on the evidence of the false flag—is ridiculously far-fetched. You need plenty of evidence if you’re going to try to make that case. That someone leapt to the conclusions I’ve seen embroidering this lone tweet, though, is exactly the kind of attempt to capitalize on a tragedy that makes politicians such an untrustworthy and disreputable bunch. What’s more, it weakens, even if imperceptibly, the attempt to keep every terrible thing done by small groups of people from costing all the rest of us whatever freedoms we have left.
Consider the screenshot below, from today’s New York Times. Look at the bottom-left corner: 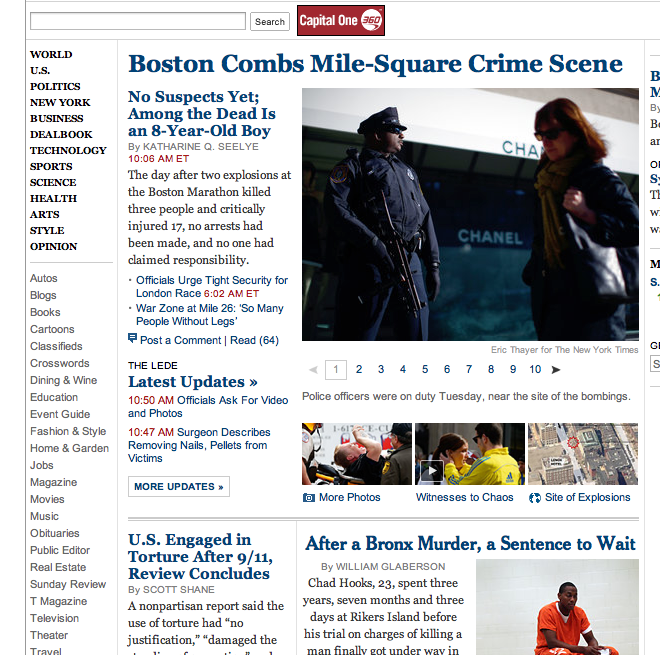 It’s not off-base to wonder if the Boston bombing will wind up producing even more intrusions on even flimsier premises than buying an airline ticket now does. It’s worth reserving a little skepticism for how information is rolled out and what policies are cooked up—because when you give humans power, they do terrible things with it, and a crisis can grant a lot of power. But that’s not the headline when details are still scarce. And the antidote is figuring out what happened when, and who did it. This kind of conspiracy stuff is probably even more damaging than, say, bringing up the menacing specter of “right-wing extremists” (credit where it’s due: I heard Wolf Blitzer shut that down the first time one of his guests mentioned it—without even a tweet to base it on).
If there’s a silver lining here, it’s that the same access that lets all this awfulness and stupidity out to play is also available to the decent among us. And, if you can fight through the disgust caused by things like YouTube comments (which might as well be hard-wired to come out loathesome) and political grandstanding, it turns out that the decency is in much larger supply. And political affiliation has next to nothing to do with it. As long as there is still freedom to ask questions, to gather and broadcast eyewitness testimony, and to share opinions about the whole thing, nobody gets to control the story. Nobody who’s any good would want to. And the vast majority, who are any good, can try to come to grips with all of it.
There’s nothing good at all about these bombings. About any bombings. But there is enough good to limit the damage. If there’s any reason to feel any level of security in a world still fully stocked with nastiness, it’s this.

Michael Nolan is the managing editor of The Freeman.