So Many People Are Fleeing the San Francisco Bay Area, It's Hard to Find a U-Haul

Too many one-way rentals.

The San Francisco Bay Area’s CBS-TV station is reporting on what it calls the “mass exodus of residents” from the Bay Area.

The number of people packing up and moving out of the Bay Area just hit its highest level in more than a decade. Of course people come and go from the Bay Area all the time, but for the first time in a long time, more people are leaving the Bay Area than are coming in. And the number one place in the country for out-migration is now, right here.

A study of the out-migration by Joint Venture Silicon Valley says workers are moving to Sacramento, Austin, and Portland due to a number of factors. But topping the list is the high cost of housing.

“You can’t even contemplate getting into the housing market here,” said Russell Hancock of Joint Venture Silicon Valley. “And I don’t mean just service workers, I mean highly skilled professionals. The tech elite are having a hard time affording reasonable housing in Silicon Valley. So this is difficult, this makes it very difficult for employers trying to recruit.”

Operators of a San Jose U-Haul business say one of their biggest problems is getting its rental moving vans back because so many are on a one-way ticket out-of-town. Nationwide, the cities with the highest inflows, according to Redfin are Phoenix, Las Vegas, Atlanta, and Nashville.

When I read about the shortage of rental trucks in San Jose, I thought it would be a good time to do a U-Haul truck rental price comparison for outbound trucks leaving San Jose vs. inbound trucks coming there. Using the U-Haul website, I analyzed a number of one-way rentals for inbound and outbound 26-foot moving trucks from/to San Jose, and those prices are displayed below for a move on March 1, along with the Outbound/Inbound price ratio. Obviously, it would be ideal for U-Haul if they had a balance of outbound and inbound trucks for their major markets, to ensure that they have adequate truck inventories in each location. 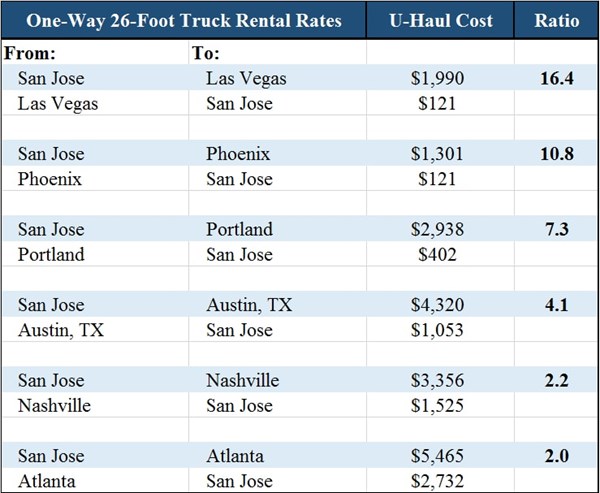 In a given month, if U-Haul had 50 trucks leaving San Jose (outbound) for various destinations and 50 trucks arriving (inbound), truck inventory is balanced. But in the case that more rental trucks are leaving a location like San Jose than arriving, then San Jose will have a truck shortage and other destination locations will have a surplus.

To help balance truck inventories and take advantage of higher demand in some rental markets than others, it’s natural that U-Haul would implement demand-based, dynamic pricing. Based on market forces, U-Haul charges higher prices in locations like San Jose with higher outbound than inbound demand and truck shortages, and lower prices in markets like Las Vegas with higher inbound than outbound demand and truck surpluses.

The high demand for outbound U-Haul moving trucks relative to the demand for inbound trucks is being reflected in market-based one-way truck rental prices. And that’s what the price data in the table above show. For example, demand must be extremely high for outbound trucks leaving San Jose for Las Vegas, and a one-way rental for the 525-mile trip is almost $2,000. But the price for a 26-foot truck going in the opposite direction from Las Vegas to San Jose is only $121, with four days of travel allowed! In contrast, a one-way car rental from Hertz from the Las Vegas airport to the San Jose airport for four days is about $800 for a compact car and about $1,300 for a full-size car and $2,100 for a Chevy Suburban SUV!

So it must be the case that U-Haul trucks are in such short supply in San Jose that it offers them almost for free ($121) when they are coming back from places like Las Vegas and Phoenix (also $121 for a one-way rental to San Jose). And U-Haul is pricing all truck sizes at that price (about $120) for one-way rentals to San Jose from Las Vegas and Phoenix: 10-foot, 15-foot, 20-foot, and 26-foot trucks.

The price-pairs for four other popular outbound destinations from San Jose that are mentioned in the news report are also displayed in the table above: Phoenix, Portland, Austin, Atlanta, and Nashville. Like for Las Vegas, the outbound-inbound price ratios are much greater than 1, ranging from 2.0 for Atlanta and 10.8 for Phoenix, reflecting a greater number of outbound than inbound trucks that results in higher prices for trucks leaving San Jose than for trucks arriving.

Bottom Line: Assuming that it’s true that the number one location in the country for out-migration is the San Francisco Bay Area and that there is a mass exodus of residents from that area, the high demand for outbound U-Haul moving trucks relative to the demand for inbound trucks is being reflected in market-based one-way truck rental prices: sky-high prices for a scarce supply of outbound trucks with high demand and really low, deeply discounted prices for an abundant supply of inbound trucks with low demand. It’s a great example of supply and demand, and market forces in action — with one-way U-Haul truck rental prices reflecting relative scarcity.

Related: I reported recently that California was one of the top five outbound US states last year for the first time, consistent with the Bay Area now apparently being the top outbound location.