There is plenty of evidence—both in America and elsewhere—that higher cigarette taxes backfire. 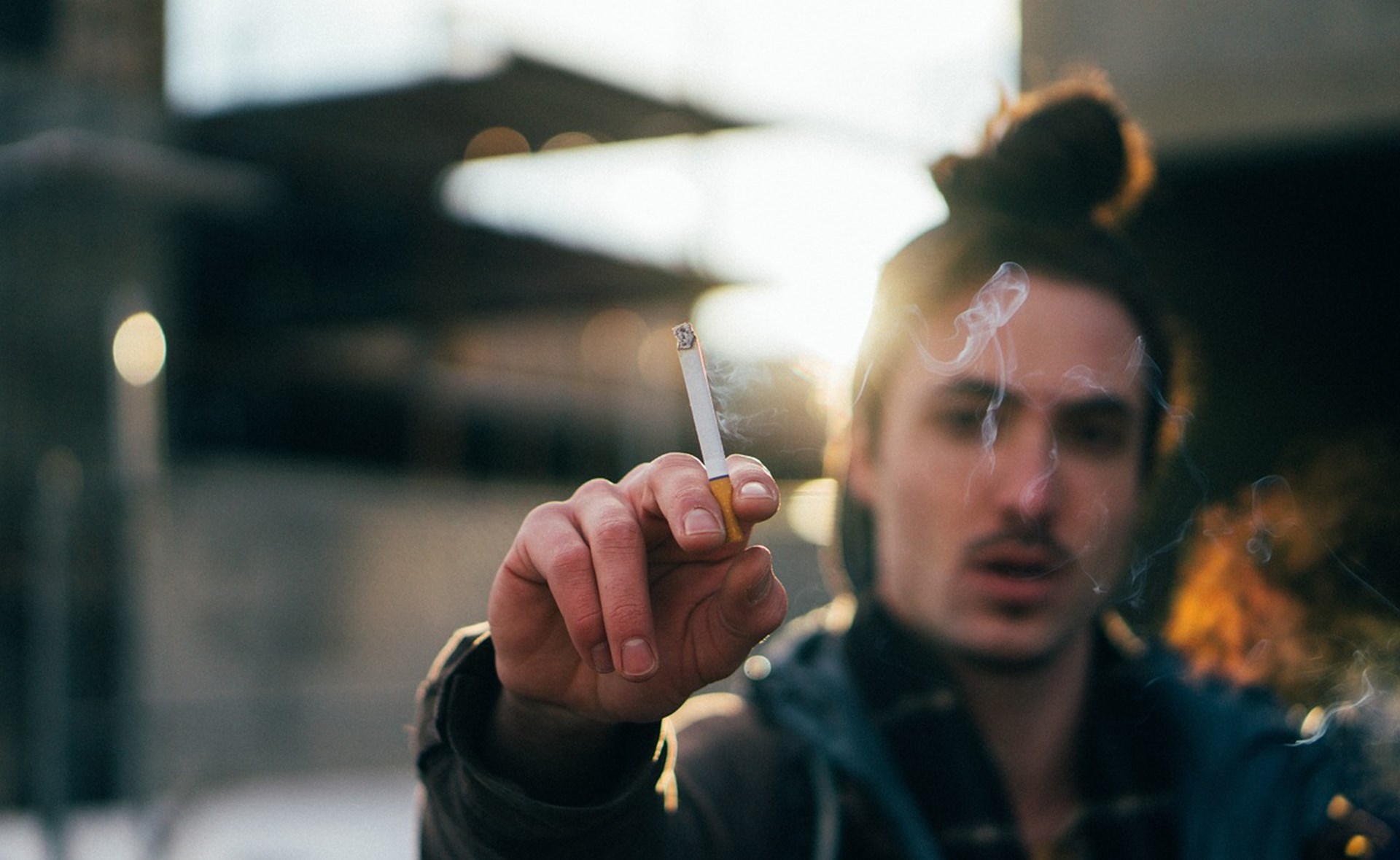 The central argument against punitive taxation is that it leads to less economic activity.

Here’s a visual from an excellent video tutorial by Professor Alex Tabarrok. It shows that government grabs a share of private output when a tax is imposed, thus reducing the benefits to buyers (“consumer surplus”) and sellers (“producer surplus).

But it also shows that some economic activity never takes place (“deadweight loss”): 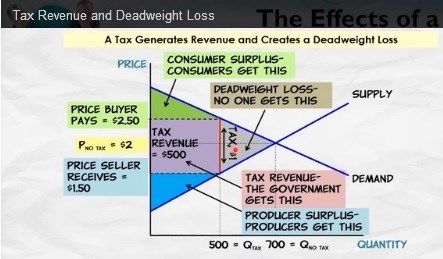 When discussing the economics of taxation, I always try to remind people that deadweight loss also represents foregone taxable activity, which is why the Laffer Curve is a very real thing (as even Paul Krugman admits).

To see these principles at work in the real world, let’s look at a report from the Washington Post. The story deals with cigarette taxation, but I’m not sharing this out of any sympathy for smokers. Instead, the goal is to understand and appreciate the broader point of how changes in tax policy can cause changes in behavior:

The sign on the window of a BP gas station in Southeast Washington advertises a pack of Newports for $10.75. Few customers were willing to pay that much. But several men in the gas station’s parking lot had better luck illegally hawking single cigarettes for 75 cents. The drop in legal sales and spike in black market “loosies” are the result of $2-a-pack increase in cigarette taxes that took effect last month… Anti-tobacco advocates hailed the higher legal age and the tax increase as ways to discourage smoking. But retailers say the city has instead encouraged the black market and sent customers outside the city.

Since I don’t want politicians to have more money, I’m glad smokers are engaging in tax avoidance.

And I feel sympathy for merchants who are hurt by the tax:

Shoukat Choudhry, the owner of the BP and four other gas stations in the city, says he does not see whom the higher taxes are helping. His customers can drive less than a mile to buy cheaper cigarettes in Maryland. He says the men in his parking lot are selling to teenagers. And the city is not getting as much tax revenue from his shops. Cigarette revenue at the BP store alone fell from $63,000 in September to $45,000 in October, when the tax increase took effect on the first of the month. …The amateur sellers say the higher cigarette tax has not been a bonanza for them. They upped their price a quarter for a single cigarette.

It’s also quite likely that the Laffer Curve will wreak havoc with the plans of the D.C. government:

Citywide figures for cigarette sales in October — as measured by tax revenue — will not be available until next month, city officials said. The District projected higher cigarette taxes would bring in $12 million over the next four years. Proceeds from the tax revenue are funding maternal and early childhood care programs. The Campaign for Tobacco-Free Kids says the fear of declining tax revenue because of black market sales has not materialized elsewhere.

Actually, there is plenty of evidence—both in America and elsewhere—that higher cigarette taxes backfire.

I will be shocked if D.C. doesn’t create new evidence since avoidance is so easy:

…critics of the tax increase say the District is unique because of how easy it is to travel to neighboring Virginia, which has a 30-cent tax, and Maryland, with a $2 tax. “What person in their right mind is going to pay $9 or $10 for a pack of cigarettes when they can go to Virginia?” said Kirk McCauley of the WMDA Service Station and Automotive Repair Association, a regional association for gas stations. …Ronald Jackson, who declined to buy a loose cigarette from the BP parking lot, says he saves money with a quick drive to Maryland to buy five cartons of Newport 100s, the legal limit. “After they increased the price, I just go over the border,” said Jackson, a 56-year-old Southeast D.C. resident. “They are much cheaper.”

An under-appreciated aspect of this tax is how it encourages the underground economy.

Though I’m happy to see (especially remembering what happened to Eric Garner) that D.C. police have no interest in hindering black market sales:

The D.C. Council originally set aside money from the cigarette tax increase for two police officers to crack down on illegal sales outside of stores. But that funding was removed amid concerns about excessive enforcement and that it would strain police relations with the community. On a Tuesday morning, Choudhry, the owner of the Southeast BP, stopped a police officer who was filling up his motorcycle at the BP station to point out a group of men selling cigarettes in his parking lot. The officer drove off without action. …On a good day, he can pull about $70 in profit. “Would you rather that we rob or steal,” said Mike, who said he has spent 15 years in jail. “Or do you want us out here selling things?”

Kudos to Mike. I’m glad he’s engaging in voluntary exchange rather than robbing and stealing, though maybe he got in trouble with the law in the first place because of voluntary exchange (an all-too-common problem for people in Washington).

But now let’s zoom out and return to our discussion about economics and taxation.

An under-appreciated point to consider is that deadweight loss grows geometrically larger as tax rates go up. In other words, you don’t just double damage when you double tax rates. The consequences are far more severe.

Here are two charts that were created for a chapter I co-authored in a book about demographics and capital taxation. This first chart shows how a $1 tax leads to 25 cents of deadweight loss. 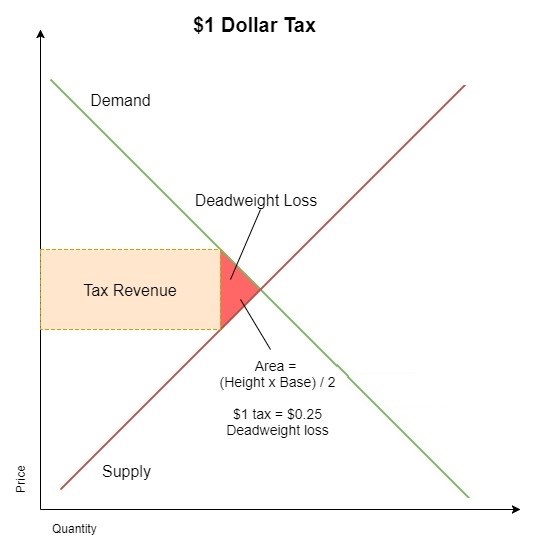 But if the tax doubles to $2, the deadweight loss doesn’t just double.

In this hypothetical example, it rises to $1 from 25 cents. 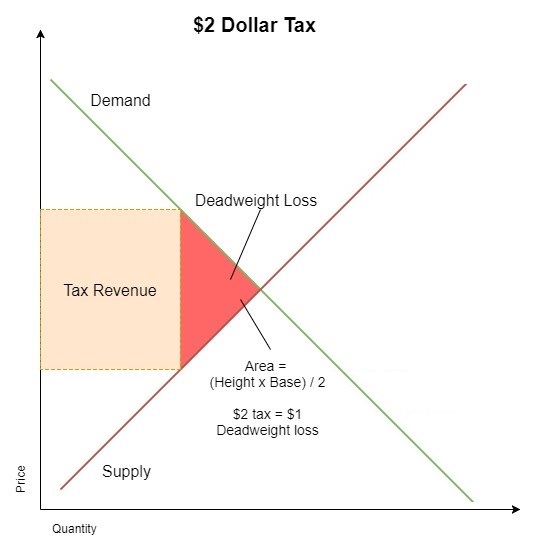 For any given tax on any particular economic activity, the amount of deadweight loss will depend on both supply and demand sensitivities. Some taxes impose high costs. Others impose low costs.

Some of my left-wing friends shrug their shoulders because they assume that rich people bear the burden. But remember that the reduction of “consumer surplus” is a measure of the loss to taxpayers. The deadweight loss is the foregone output to society.

This article was reprinted from International Liberty.