A growing chorus of alarmist voices decries the rising economic inequality in the Western world, especially in the United States. Surprisingly enough, the same mainstream analysts complain about the anemic growth of labor productivity without seeing the correct link between the two. 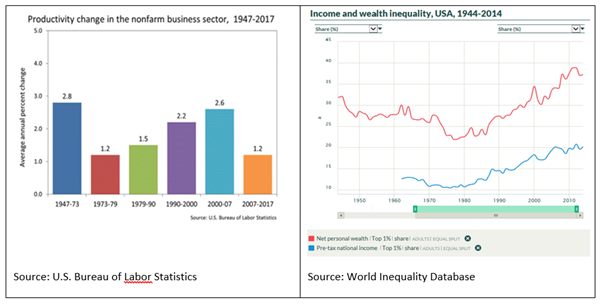 The Role of Capital Accumulation in Economic Growth

What common factor could explain the two divergent trends that the mainstream analysts seem to overlook? In the 1940s, Mises was impressed by the ”miraculous” rise in the standards of living of American wage earners, which had been going on for more than two centuries. For him, the answer was straightforward: capital accumulation is the driving force behind both labor productivity and standards of living convergence.

Mises also warned that depletion of the capital stock would hamper capital accumulation and labor productivity.

Building on Mises's work, Rothbard explained in detail what capital accumulation requires: (i) new capital investment that lengthens the structure of production and (ii) technological progress that overcomes the diminishing returns accompanying the increase in the supply of capital goods. However, Mises also warned that depletion of the capital stock would hamper capital accumulation and labor productivity. Unfortunately, mainstream analysts and the United States seem to have forgotten this valuable lesson.

In terms of technological progress, the US has maintained its world leadership during past decades. It ranks second in the world to Switzerland in terms of both innovation and business sophistication, spends more for Research & Innovation than the OECD or EU on average relative to GDP, and makes up the majority of the top 25 universities in the world. Moreover, it has issued the same amount of patents over the last three decades compared with the previous 150 years.

In terms of capital stock, the picture is completely different. According to estimates of the Bureau of Economic Analysis (BEA), the stock of private non-residential assets per worker has increased in real terms at about 1 percent p.a. from 1947 to 2009 and stagnated since the Great Recession (left chart below). However, BEA's alleged sustained pace of capital growth seems hard to reconcile with the falling private investment and savings since the mid-1970s (right chart below).

In addition, the BEA methodology presents some serious shortcomings. Except for cars, BEA uses the “perpetual inventory method” to estimate fixed assets. According to it, the value of the capital stock is indirectly estimated as the sum of past investment flows minus the estimated depreciation. It means that all past investments are considered sound by default, which is certainly not the case nowadays when recurrent booms and busts cause significant volumes of malinvestments. Other question marks relate to the accurate estimation of depreciation rates in the face of rapid technological progress and the use of GDP deflators as their accuracy is unreliable, especially with regard to real estate investment.

All these considerations have led not only us but also the Federal Reserve Board (FRB) to suspect that BEA's estimates of the US capital stock are overvalued. It is intriguing that the FRB adjusts the BEA estimates downward, especially with regard to real estate assets— "structures" in BEA's jargon when it uses them as input for the calculation of the capital stock in manufacturing. As a result, there is a substantial difference between BEA and FRB estimates of the evolution of the volume of manufacturing capital stock from 1952 to 2016, in particular for the real estate component (left chart below). Therefore, we tried to recalculate the BEA estimate of the total stock of private non-residential capital per employee by extrapolating the difference between the two manufacturing indexes coming from BEA and FRB (right chart below).

The new results suggest that the real stock of capital per worker grew in a clear and sustained manner only until the end of the 1970s and fell afterward until the trough of the Great Recession. The recalculated capital stock is more consistent with the observed declines in investment and productivity since the mid-1970s and also confirms Mises's prediction that wrong policies would lead to capital consumption.

For the United States, the failed economic policy is the exponential growth of government intervention in the economy in the 20th century, which stifled entrepreneurship and capital accumulation. This is obvious in the rise of both government spending that redistributes away economic resources from their originators (left chart below) and the amount of regulatory burden (right chart below). Another key factor taking a toll on capital endowment is inflation, which gained traction following the de facto abolishment of the gold standard in 1971.

Most importantly, inflationary policies trigger boom-bust cycles via the artificial lowering of interest rates below their free-market level. In a recent article on the business cycle, Salerno emphasizes that "overconsumption" and "malinvestment" are the two salient marks of the boom—not "overinvestment," as wrongly understood by some mainstream critics. It is no surprise that the capital stock per worker dropped during the business cycles that have occurred regularly since the 1970s and that culminated in the Great Recession. The illusion of the boom fuels not only capital consumption but also the polarization of wealth and incomes in the society. The fiduciary credit expansion fuels an increase in asset prices, most commonly on stock exchanges and in real estate (charts below).

Although starting from a limited number of transactions, all owners calculate their net worth with the newly inflated asset prices, boosting the value of household assets in excess of liabilities. As a result, the rich appear to get even richer in an economy on steroids. This explains why both the US national wealth has grown much faster than national income since the end of the 1970s (left chart below), and the number of wealthy people increased significantly (right chart below).

The rising inequality since the 1970s has been fueled by both the decline in labor productivity and monetary expansion inflating asset prices. Both are perverse effects of government interventionist policies, which led to a gradual erosion of the US capital stock per employee. This is the correct linkage between inequality and productivity as explained by Mises and other Austrian School economists.

People have different skills and preferences, so the free market does not lead to a complete equalization of incomes and wealth.

People have different skills and preferences, so the free market does not lead to a complete equalization of incomes and wealth. Nevertheless, it does ensure the proper allocation of capital to increase labor productivity and satisfy the most urgent needs of consumers. As a result, the gap between the well-off and the poor is not only gradually diminishing but also gets less significant in terms of consumption. Eventually, the disadvantage of wealth inequality becomes mostly a psychological one. As long as the capitalist consumes only a fraction of his wealth and invests the rest into productive businesses, the real beneficiary of the increase in labor productivity is the poorer part of society.

Dr. Mihai Macovei is an associated researcher at the Ludwig von Mises Institute Romania and works for an international organization in Brussels, Belgium.