A female veteran's case against the selective service

"The United States Senate voted to pass a defense bill today that would require young women to sign up for a potential military draft for the first time in U.S. history."

This issue was bound to come up eventually, as women have recently been allowed to compete for combat positions on the front line. Captain Kristen Griest’s recent completion of Army Ranger School and assignment as an Infantry officer is evidence of this shift in both policy and culture.

The accepted logic goes that if women have equal access to all jobs in the military, they ought to have equal responsibility with respect to the draft. And make no mistake: even though there has not been a draft since the 1970s, the ultimate purpose of Selective Service registration is precisely to enable a draft when deemed necessary.

Many are applauding these changes as an important step towards “equality” and recognition of women’s capabilities. But the focus on equality is masking the underlying injustice of the law in the first place. The more important issue is that forcing anyone to register for Selective Service is unjust because it is based on coercion (and has the potential to place otherwise peaceful people into violent situations). Let’s examine why.

Penalties for failing to register with Selective Service

It is a statute that institutionalizes indentured servitude whenever the government sees fit.

Most people are aware that failing to register with Selective Service makes a man ineligible for federal student financial aid, and seriously impacts his ability to get a government job, obtain a security clearance, or gain citizenship. Fine, you may say – a young man who does not want to register can pay the price by not pursuing federal financial aid, and not getting a government job, security clearance, or applying for citizenship. That is a fair trade, and at least there is no violation of natural rights in that scenario; all a man needs to do is exercise his right to opt out or disassociate. But there’s more:

And there you have it – where the law is exposed for what it really is: a statute that institutionalizes indentured servitude whenever the government sees fit. That is exactly what military service is, whether you join voluntarily or are conscripted into the armed forces (read why here). Now if you refuse to register, your entire professional life is likely to be destroyed. Any person who recognizes the principle of self-ownership will immediately understand why requiring a person to register for the draft is the antithesis of personal freedom. If you fail to register, you risk your liberty (through jail time) or the fruits of your labor (by paying a fine) for committing no crime at all. There is no reason to believe that if women are made to register for Selective Service that these penalties will change – and they will infringe on women’s rights the same way that they currently infringe on men’s rights.

No Great Step for Women

The mere presence of a draft registration is an assertion that some people are qualified to put other people’s lives at risk.

This article is not meant to doubt the ability of women to perform physically demanding tasks in dangerous, high-stakes environments. Indeed, women have been successfully engaged in many different roles during war for decades, as medics, pilots, gunners, Female Engagement Team members, and more. Unfortunately, many people have been pining for “equal” treatment for women without considering what the actual treatment is – and whether it’s a good thing for men, either.

The real issue at play with this latest amendment is not whether women can or should fill combat roles, and thereby be eligible for the draft. The real issue is that a Selective Service registration (which leads to a draft) is immoral for both men and women, and that neither should be required to register at risk of becoming a felon, being fined, or being put in jail. The mere presence of a draft registration is an assertion that some people are qualified to put other people’s lives at risk. They aren’t.

Moreover, an important point is missing from the national discussion: if the United States were actually to be attacked, there would be no shortage of volunteers to defend the country. Instead, a draft would most likely be utilized to fight a war in which willing volunteers were hard to find…which is perhaps a damning indictment of the motives for a particular war.

While many are hailing Selective Service registration as a step forward for women, I am rather reminded of these wise words from Alexis de Tocqueville: “Americans are so enamored of equality that they would rather be equal in slavery than unequal in freedom.” 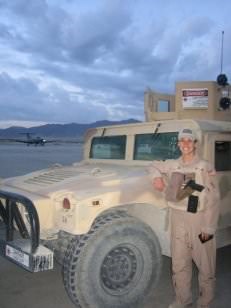 Jessica Pavoni is a former Air Force Special Operations instructor pilot. She has 1,335 combat hours, and has deployed eight times to three regions of the world. Her writing has been featured at Antiwar.com and RonPaulInstitute.com. Visit her blog libertybug.org.