As I have explained in previous columns for CapX, there are a number of myths surrounding the Nordic countries that don’t stand up to scrutiny. These include the notion that long life span in Nordic nations arose as the public sector expanded, the idea that generous public programs alone explain low levels of Nordic poverty and the myth that Nordic countries are bumblebees that defy gravity by not being adversely affected by high taxes.

But surely the Nordic countries do show one leftist theory to be correct: that social democrat policies can be popular with the electorate.

Although the Social Democrats have recently lost much of their previous support, they did manage to dominate Nordic policies for long. Sweden was sometimes referred to as a one-party state, since the Social Democrats ruled it almost consecutively from 1932 till 2006 (interrupted by two short spells of centre-right rule during 1976-1982 and 1991-1994).

It is sometimes puzzling to the outsider why the Nordic public repeatedly have elected tax-raising governments to power. The obvious answer is ideological support for welfare state policies.

However, there is also another reason worth examining in greater detail: the general public has not been fully aware of the price tag, in terms of higher taxes, attached to expanding public sectors. Politicians have created a fiscal illusion which has resulted in higher levels of taxation that the population would otherwise have accepted as feasible had taxes been levied in a transparent way.

Before policies radicalised in the late 1960s, the tax levels in Nordic nations were around 30 percent  of GDP – quite typical of other developed nations. At the time, the tax burdens were quite visible. Most taxation occurred through direct taxes, which showed up on employees’ payslips.

Over time, an increasing share of taxation has been raised through indirect taxes. The latter are less visible to those paying them, since they are either levied before the wage is formally given to the employee or are included in the listed price of goods.

Finland is worth considering as an example. The country’s tax level was 30 percent of GDP in 1965. Indirect taxes in the form of VAT and mandatory social security contributions amounted to a quarter of total taxation. In 2013, the total tax take had increased to 44 percent of GDP, half of which was hidden taxes.

As shown below, Finnish governments have funded the expansion of the public sector by raising the hidden, but not the visible, tax burden. Denmark has followed a route wherein both hidden and visible taxes have been hiked.

Hidden and visible taxes in Finland (percentage of GDP) 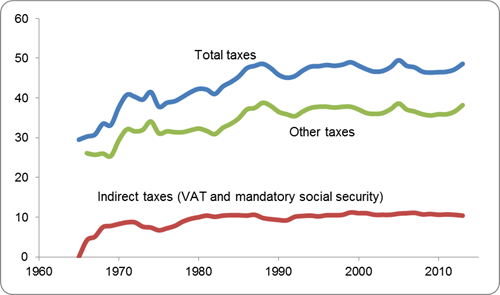 Hidden and visible taxes in Denmark (percentage of GDP)

In Norway and Sweden, visible taxes are today lower than in the 1960s, although the true taxation is considerably higher. As can be seen below, it is clear that governments in both countries have followed a strategy based on replacing visible tax income with hidden tax incomes.

Thus, whilst the average worker has paid progressively more to the government, the payslips of the same worker have misleadingly shown a reduction in taxation.

Hidden and visible taxes in Norway (percentage of GDP) 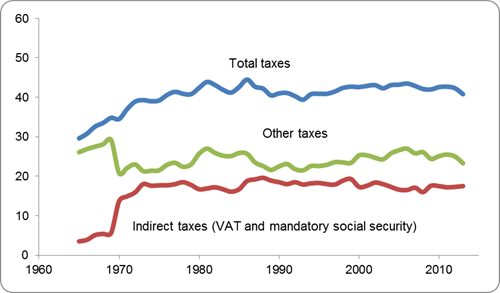 Hidden and visible taxes in Sweden (percentage of GDP) 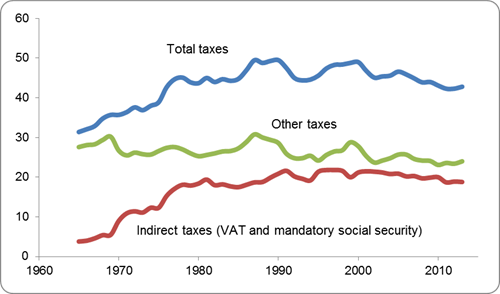 In other words, except in Denmark, the rise in taxation has occurred fully through an increase in hidden taxation.

This is in line with the predictions of fiscal illusion made by Italian economist Amilcare Puviani in 1903. Puviani explained that politicians would have incentives to hide the cost of government by levying indirect rather than direct taxes, so that the public would under-estimate the cost of policies.

The illusion can thus be created that an expanding state benefits individuals and families and yet costs less than it actually does. Nobel laureate James Buchanan and other researchers have expanded on the idea that it is easier for politicians to raise hidden, indirect taxes rather than visible ones.

Perhaps it comes as no surprise that those who believe in a higher tax rate in other parts of the world have followed a similar strategy as the Nordic nations. The American left-liberal think tank the Roosevelt Institute openly recommends “less-visible taxes that Americans are more likely to support.”

The Obamacare system launched in the US represents a form of indirect taxation – through an overly complex system – that is even more difficult to comprehend for the average taxpayer than in the Nordic systems.

I don’t doubt that less visible taxes in the US, the UK or other parts of the world would prove an easier route to raise the tax burden than visible taxes. This is indeed a lesson that the left can learn from the Nordics.

But the question remains if this is a good route to venture on. Shouldn’t politicians strive for systems where people are aware of how much they are paying for the government?

This article was originally published at CapX.

Nima Sanandaji is a research fellow at CPS. He is the recent author of The Birthplace of Capitalism: The Middle East as well as Scandinavian Unexceptionalism available from the Institute of Economic Affairs.