Health care was needlessly expensive and inefficient before the ACA

Right after Obamacare was enacted in 2010, I wrote a column suggesting four principles that should guide and motivate supporters of free markets and limited government.

As part of that article, I pointed out that Obamacare wasn’t a dramatic change. Instead, it was just another layer of government imposed on a health system that already was burdened by a huge amount of intervention.

Later that year, the Center for Freedom and Prosperity released a video that elaborated, pointing out that Obamacare simply made a system dominated by government into a system even more controlled by government.

That video included two charts based on my back-of-the envelope calculation, and I shared them in a 2013 column that further discussed the incremental damage of Obamacare.

Our healthcare system as a mess before Obamacare. Normal market forces were crippled by government programs such as Medicare and Medicaid and also undermined b 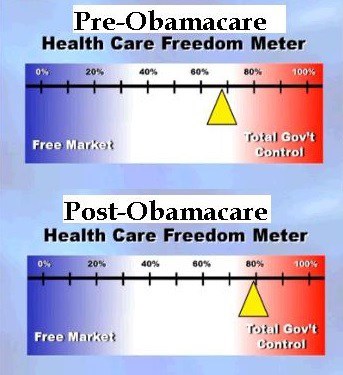 y government intervention in the tax code that resulted in pervasive over-insurance that exacerbated the third-party payer problem. These various forms of intervention led to all sorts of problems, such as rising prices and indecipherable complexity…Obamacare was enacted in 2010, and it was perceived to be a paradigm-shifting change in the healthcare system, even though it was just another layer of bad policy on top of lots of other bad policy. …Not surprisingly, all of the same problems still exist, but now they’re exacerbated by the mistakes in Obamacare.

In other words, we’re not going to fix the healthcare system by merely repealing Obamacare.

Yes, that’s a necessary step, but much more needs to happen.

Which is why I’m very happy that Prager University has a new video pointing out that health insurance doesn’t work nearly as well as car insurance and homeowners insurance. Why? Because it’s become an inefficient form of pre-paid health care rather than protection against large and unexpected expenses.

Amen. I’ve made a similar case on several occasions.

Though I wish the video went even further by explaining how the healthcare exclusion in the tax code encourages over-insurance.

And here’s a video from the Foundation for Economic Education that also explains how government intervention is distorting the health market.

Here’s the most important factoid from the video, which comes from the accompanying FEE article.

According to the Consumer Price Index and Medical-care price index from 1935 to 2009, the health care spending crisis didn’t start until the mid 1960s, around the same time when Medicare and Medicaid were signed into law, and at the same time that we began requiring doctors to go through all sorts of expensive licensing procedures beyond medical school. Since then, health care spending has doubled, even adjusted for inflation.

But let’s keep everything in perspective. Our system is needlessly expensive and inefficient because of government, but it still manages to deliver some decent outcomes.

Here is some very interesting analysis from the Adam Smith Institute in London.

US healthcare is famous for…poor outcomes. …their overall outcome on the most important variable – overall life expectancy – is fairly poor.

I get this factoid thrown in my face repeatedly when speaking overseas, so I was delighted to find out that it has nothing to do with the quality of our healthcare.

…consider the main two ingredients that go into health outcomes. One is health, and the other is treatment. If latent health is the same across the Western world, we can presume that any differences come from differences in treatment. But this is simply not the case. Obesity is far higher in the USA than in any other major developed country. Obviously it is a public health problem, but it’s unrealistic to blame it on the US system of paying for doctors, administrators, hospitals, equipment and drugs. In fact in the US case it’s not even obesity, or indeed their greater pre-existing disease burden, that is doing most of the work in dragging their life expectancy down; it’s accidental and violent deaths. It is tragic that the US is so dangerous, but it’s not the fault of the healthcare system; indeed, it’s an extra burden that US healthcare spending must bear.

Indeed, it turns out that the American system produces very good results on life expectancy once you adjust for these behavioral factors.

…simply normalising for violent and accidental death puts the USA right to the top of the life expectancy rankings.

And here’s the relevant chart from the article. 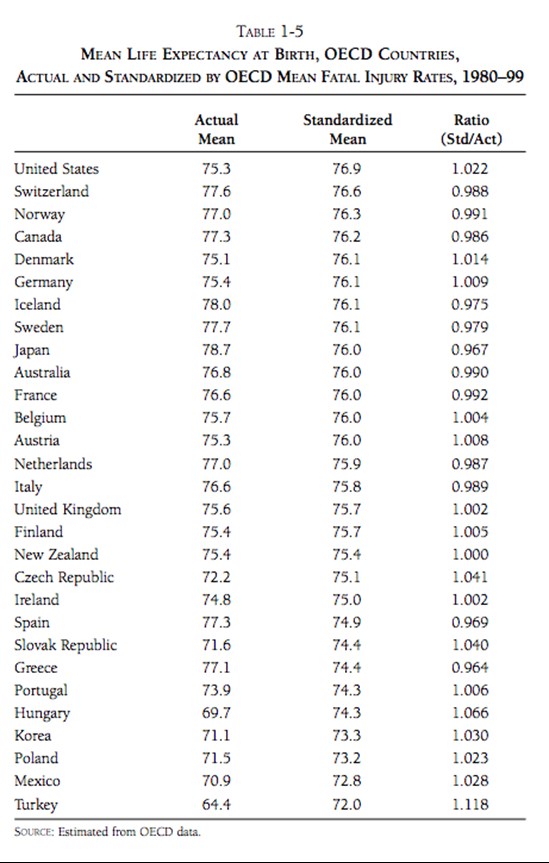 By the way, health spending in the United States would probably be high compared to other nations even if we removed all government intervention and changed our risky behaviors.

But only because richer nations can afford – even demand – new technology, cutting-edge research, and new treatments. In his Bloomberg column, Professor Tyler Cowen discusses some of these factors

…viewed through the lens of consumption behavior, American health-care spending is typical of this nation’s habits and mores. Relative to GDP, Americans consume a lot more than Europeans, and our health-care spending is another example of that tendency. …Consumption in the U.S., per capita, measures about 50 percent higher than in the European Union. American individuals command more resources than people in countries such as Norway or Luxembourg, which have higher per capita GDP. The same American consumption advantage is evident if you look at dwelling space per person or the number of appliances in a typical home. …To put it most simply, we Americans spend a lot on health care because we spend a lot period.

Tyler includes a graph mapping healthcare expenditures with overall consumption. The basic takeaway is that what makes America an outlier is our ability to consume, with healthcare being an example.

Peter Suderman offers some very sage advice in a column for the New York Times.

…when it comes to health care, Republicans don’t know what they want, much less how to get it. …Democrats, on the other hand, share a distinct vision of robust universal coverage guaranteed by the government and paid for by a combination of delivery-system efficiencies and higher taxes. What Republicans need, then, is a set of guiding principles – a health care vision that should work from the ground up, that imagines a more affordable and more effective system.

Peter then suggests some principles.

…it would mean giving up on comprehensive universal coverage. Otherwise, Republicans will just end up bargaining on the terms set by Democrats, as they are now. …a second principle: unification, not fragmentation. …employer-provided coverage…is subsidized implicitly through the tax code, which does not tax health benefits provided by employers as income. This tax break is the original sin of the United States health care system. Worth more than $250 billion annually, it has enormously distorted the market, creating an incentive for employers to provide ever-more-generous insurance while insulating individuals from the true cost of care. …the third principle comes in: Health coverage is not the same as health care. Instead, it is a financial product, a backstop against financial ruin. Health care policy should treat it as one.

…For noncatastrophic, nonemergency medical expenses, Republicans ought to promote affordability rather than subsidies. …encourage supply-side innovations in addition to demand-side reforms. The tangle of regulations governing health care can make it difficult for providers to respond to market signals and innovate. Doctor-owned hospitals are restricted by law, for example, and certificate-of-need requirements force medical providers to obtain licenses in a process that effectively requires them to ask permission from competitors to expand.

In other words, we wind up this column where we started.

Americans get good health care, but it’s needlessly expensive and inefficient as I explained in Part I and Part II of a recent series. If we can somehow unravel, or even bypass, all the bad government policy that currently exists, we could have a much better system.

How much better? Well, check out this Reason video on a free-market health center in Oklahoma, which recently was featured in a story in Time. Based on my personal experiences, that’s a big step in the right direction.