Nonzero: The Logic of Human Destiny by Robert Wright 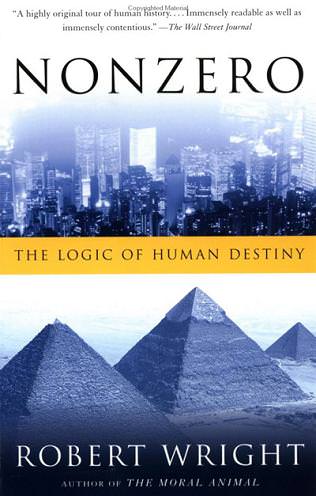 In Nonzero: The Logic of Human Destiny, Robert Wright argues that gains from trade, or “nonzero” transactions, is the motivating force driving human history. Because of the advantages of engaging in nonzero-sum transactions, it was virtually inevitable that living organisms would evolve whose primary function would be to capitalize on the benefits of nonzero trading opportunities. In turn these species would construct social, legal, and cultural institutions whose primary purpose was to make possible ever-increasing gains from trade. There is an “arrow” to history, one pointing toward ever-increasing social complexity designed to make nonzero interactions possible.

Wright divides the book into three basic parts that elaborate the idea of the centrality of nonzero interactions to the trajectory of human history. Part I, modestly titled “A Brief History of Humankind,” advances the thesis that human cultural evolution can be best understood as the creation of “technologies,” such as money, writing, and printing, designed to make possible the realization of gains from trade. Employing a model of Darwinian selection among cultural groups, Wright argues that once invented, these useful technologies tended to spread rapidly.

Invoking the concept of reciprocal altruism from evolutionary psychology, Wright argues that humans are naturally inclined to engage in nonzero-sum transactions. Here Wright has in mind two basic engines of such interactions: the division of labor and the division of knowledge. Wright places more emphasis on the latter. Information, after all, is the ideal nonzero-sum good; unlike physical resources (such as coal or food) the stock of information does not decrease as more people use it.

Once discovered, information can be made freely available to all—indeed, many types of information technologies become increasingly valuable as more people use them. Wright plots the arrow of human cultural evolution as the spread of these new information technologies. Following on the heels of the revolutionary inventions of agriculture, money, and printing, the future will be powered by the Internet, an information-processing device that can instantaneously coordinate information from disparate parts of the globe.

Part II, “A Brief History of Organic Life,” develops a similar model of biological evolution to that proposed for cultural evolution in Part I. Specialization of cells in living creatures provides similar benefits to the specialization of functions in a human economy. As a result, there is a similar arrow of biological evolution, generating increasingly complex organic entities and culminating in the evolution of a species of high intelligence. If intelligent humans had not evolved to fill this environmental niche, Wright believes some other creature almost certainly would have.

Earlier in the book Wright recognizes the possibility that the surplus from exchange appears first and that political institutions arise to appropriate some of the surplus that has already been created. If so, the gradual elevation of power toward global political institutions should be resisted, rather than embraced. He leaves this tension unresolved in his conclusions.

One of Wright’s central themes is that “good ideas,” such as eyesight, tend to be “invented” independently many times in history. The book itself unwittingly proves the point. Many of the core ideas of Nonzero were also articulated by F. A. Hayek. Hayek’s career, of course, was dedicated to an examination of the way that dispersed knowledge is coordinated and transmitted to dispersed decision-makers. Hayek also advocated a model of cultural group selection virtually identical to Wright’s. Wright, unfortunately, only mentions Hayek once in passing.

Nonetheless, Wright has provided an important service by making these ideas accessible in a way Hayek was unable to do. Wright, a former reporter for The New Republic, has written a book for the new millennium, clear and witty in exposition, penetrating and provocative in analysis. Many of his tangents are as interesting as the central narrative. Everyone interested in freedom and spontaneous order, and the implications of those concepts for understanding both the past and future, should read this important and fascinating book.