President Obama picked up on an older initiative in his State of the Union address when he called for a $9.00 minimum wage—a 24 percent increase that would be taken in two steps between now and 2015, and then pegged to inflation after that. Currently, the federal minimum wage stands at $7.25. Along with his proposal for a higher minimum, the President indicated he was adding rungs to the ladder of opportunity. Really? Why now?
As the White House put it:
The President believes that no one who works full-time should have to raise their family in poverty. But right now, a full-time minimum wage worker makes $14,500 a year—which leaves too many families struggling to make ends meet, with a family of four with a minimum wage worker still living below the poverty line. That’s why the President is calling on Congress to raise the Federal minimum wage for working Americans in stages to $9 in 2015 and index it to inflation thereafter.
Many people share the President's dream for a better world, but if it's as easy as passing a law, why not $9.50 (the number Candidate Obama called for during his first campaign), $10.00, or even more? You see, there’s more to the story.
The White House indicates that "raising the minimum wage to $9 would directly boost the wages of about 15 million workers by the end of 2015 and would raise wages for millions more by causing a ripple effect of employers choosing to raise wages above the minimum."
Maybe $9.50 or $10.00 is just a bridge too far. Even if we’re only talking $9.00 per hour, not everyone shares the President’s belief in the magic power of command-and-control solutions to improve the labor market.

Problems with the Rhetoric

There are several difficulties with all this rhetoric. The first has to do with perceptions.
Are there really 15 million people in the economy earning $7.25? No, there are far fewer. According to the Bureau of Labor Statistics, in 2011 there were only 1.7 million hourly paid workers receiving the $7.25 minimum wage. The rest of the 15 million mentioned in the White House communication earn more than $7.25—up to $9.00 an hour. Some of these may be affected positively if the minimum is raised to $9.00. Unfortunately, others in the $7.25 to $9.00 group will be affected negatively by resulting layoffs or shorter hours. In the final analysis, what we are paid on the job has to be produced by those who work for the employer. Mandated pay increases don’t automatically make us more productive. If they did, we would be clamoring for much higher numbers than $9.00.
In addition, the White House is silent about the effects of the earned income tax credit (EITC)—that is, the negative income tax program, which provides a payment from government (i.e., taxpayers) for low-income workers. And what about food stamps, Medicaid, subsidized housing, and "free" childcare? Are these not a form of compensation? For years, the nation has enriched welfare packages in an attempt to ease the difficulties experienced by some low-wage workers. Yet none of that income counts in the Obama White House calculations.
And what about that ripple effect? Everyone knows organized labor supports higher minimum wage rates because these rates blunt the advantage of non-union workers and the firms that employ them. In other words, higher minimum wages raise their rivals’ costs. They also mean higher barriers to labor-market entry benefiting those already in the club. And, indeed, when the first rung on the wage ladder is lifted, union negotiators have an argument for raising the other rungs on the unionized pay-scale ladder as well. Unions love minimum wage increases.

What about the State Minimum Wage Effect?

But there’s another problem with the magical suggestion that a new higher minimum wage would lift all the boats in the nation’s labor pool. As the President indicated, some 19 states already have a higher minimum wage than the nation’s $7.25 number. In fact, Oregon’s is the highest, at $9.19. There would be no effect in that state. Did the White House analysts compensate for the 19-state effect when estimating that 15 million workers would be affected by the change?
So what’s going on? Is Mr. Obama talking about lowering the first rung on the ladder of opportunity or helping organized labor by raising rivals’ costs? Maybe some of both? Is this another bootleggers and Baptists coalition, where one interest group tries to take the moral high ground while the other chases bottom-line benefits—but both propose the same government restriction?
Consider the accompanying map, which shows prevailing minimum wage rates across the 50 states. As indicated, these vary from a high of $9.19 to a low of $7.25. But more to the point, notice the juxtaposition of states like Vermont, with an $8.60 minimum, and New Hampshire, with $7.25. Or compare Illinois, with $8.25, and Iowa, Indiana, and Wisconsin, currently enforcing the federal $7.25. Surely union organizers will appreciate and lend their support to the President’s proposal for reducing competition in competing labor markets. 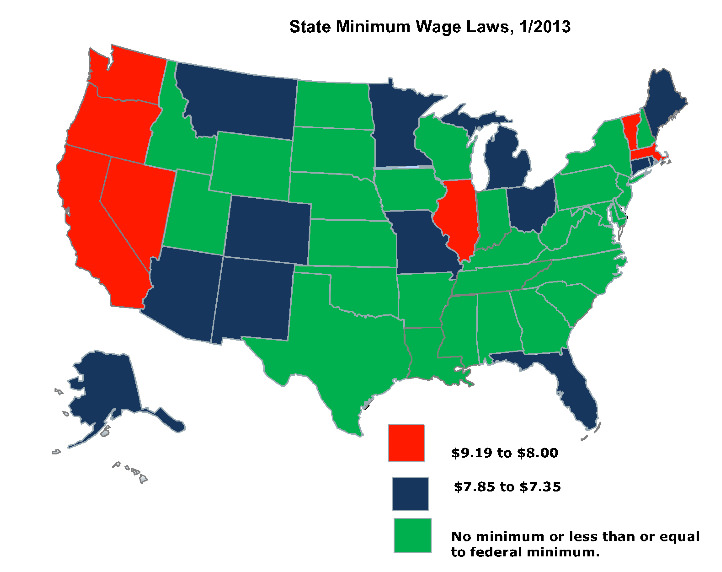 There is another approach that can be taken to lifting the wealth of nations. Instead of yielding to that command-and-control conceit and thinking that markets can simply be ordered successfully to deliver a better world, an alternate approach involves using what Duke political economist Michael Munger calls "the right kind of nothing."

Let’s reduce poverty the old-fashioned way. Let’s get back to work. America doesn’t have a minimum wage problem. America has an overly-energized government problem, one that limits opportunity for entry-level workers and on-the-job training.

Editor's Note: Professor Yandle updated this piece from its original to offer a few immediate ways to "clear the brush" and get people back to work.