Demand for ethically-sourced meat and dairy is changing factory farming. 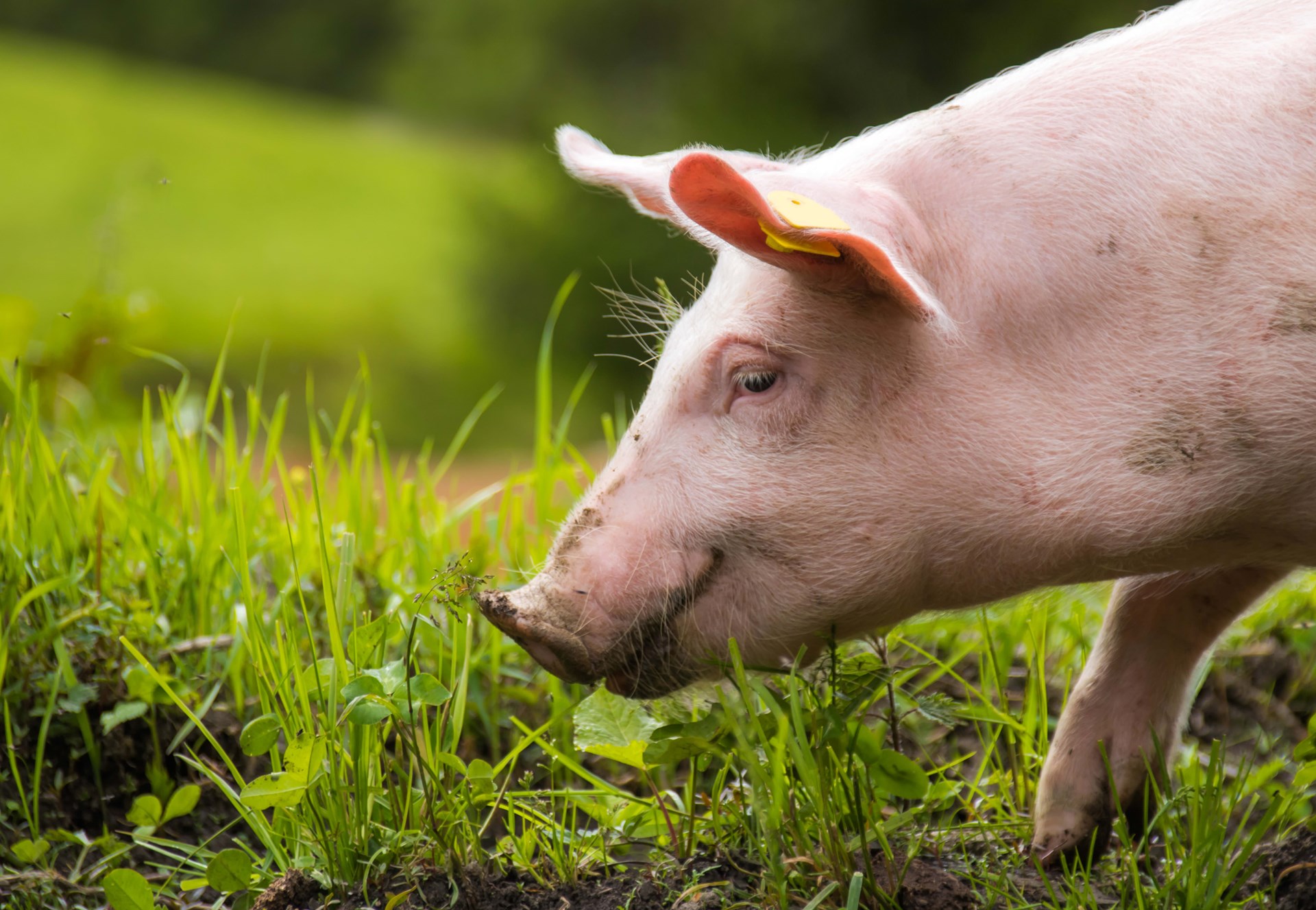 How are farm animals treated and should one care? Libertarian philosopher Loren Lomasky once gave me the most succinct argument for caring about the welfare of, at least some, animals: “You wouldn’t put your cat in a microwave, would you?”

For the record, I am not vegetarian and I follow something similar to a paleo diet, which is high in animal proteins and fats. But whether or not one believes animals have rights, I am fairly confident that the last oysters I ate were unaware that their fate involved me and a bottle of champagne. As far as I know, bivalves do not even have brains. But what if certain farm animals had intelligence and awareness levels in the same league as the pets we care so much about?

This Little Piggie Was a Movie Star

At the Fork is well edited, well paced, and accompanied by quality music.

It turns out that pigs can master certain basic video game tasks that dogs and even monkeys cannot, and they appear to be able to nonverbally communicate with humans or other pigs in much the same way as dogs. Regardless of one’s position on eating meat, one can still care about not intentionally inflicting pain on animals or care that they are treated in humane ways. John Locke and Immanuel Kant adopted such a perspective.

Producers John Papola and Lisa Versaci, whom I know from their most excellent economics music videos, have produced a feature length documentary, At the Fork. John is a meat eater and Lisa is not, and in this film they visit various farms to see how meat and dairy animals are raised and treated. John narrates the film and at the beginning states, “So while I’m no animal activist, I am a filmmaker and the best way for me to honestly explore this issue is to hit the road and make a film about it.”

At the Fork is beautifully shot with attractive visuals throughout. At the Fork is also well edited, well paced, and accompanied by quality music, including tunes from executive producer Dave Matthews. A 1970s PBS documentary this is not. The movie also interviews different farmers, ranchers, politicians, business people, and scholars with different perspectives and never makes anyone look bad. A Michael Moore style documentary this is not.

While letting viewers reach their own conclusions about animal welfare or rights, the film raises many interesting questions.

The film shows a range of farms, from factory farms that keep animals in close quarters to free range farms. I appreciate that the film doesn’t show anything that comes close to gruesome, but brings viewers up close to the animals, and lets them see aspects of daily life for pigs, cows, and chickens that are produced for meat, dairy, or eggs.

As a Corinthian, the idea of even stepping on mud grates my finer sensibilities. So I had to take a step back and realize that pigs are okay not sleeping on a Westin heavenly bed. Animals are quite different from humans, so one should not attempt to judge their conditions based on our preferences.

That said, we know that cats purr when scratched behind the ears, dogs like it when their bellies are rubbed, and will growl or whine if poked. Just as we can interpret whether a cat or dog is enjoying an activity or their surroundings, the same appears to be true for many animals, such as the pigs in this film.

While letting viewers reach their own conclusions about animal welfare or rights, the film raises many interesting questions.

“I think it’s our moral obligation to care about these animals, dominion does not mean domination.”

Toward the beginning of the film, on a visit to an animal sanctuary, John voluntarily locks himself in the equivalent of a gestation crate that most pig farmers use to hold breeding pigs for the entirety of their pregnancies. The crates, two foot by seven foot cages, are not big enough for a pig to turn around or fully lie on its side. Breeding pigs, which have multiple pregnancies per year, may live in one of these crates for 10 months out of a year before they move to slightly larger farrowing crates after giving birth.

John asks, “So this is the price that they pay for me to eat my spare ribs?”

After showing a few factory farms where pigs spend their lives indoors, the film shows farms that have varying degrees of outside-access to open pastures. When the film cut to a sweeping visual of pigs almost certainly enjoying themselves at a free range farm, I started feeling guilty for having no idea the conditions in which these animals are raised.

If I would not force a dog to live in a six by twenty inch cage, should I, as a consumer, demand that a pig be raised under such conditions? During her filmed interview, famed animal scientist Temple Grandin says about life in a cage, “It would be like living in an airline seat and I’m never allowed to walk in the aisle.”

A nice aspect of the movie is its presentation of a range of animal husbandry methods. One farm, which is home to two-thousand pigs, uses gestation crates only for artificial insemination then transfers pigs to open pens where they can move freely and socialize. Another farm uses a system where pigs can go from pasture to barn during inclement weather. At another, pigs and four “red-meat” species forage a forty acre forest. Their rancher states, “I think it’s our moral obligation to care about these animals. This whole idea that we have dominion over the animals, well yeah that’s fine, but dominion does not mean domination.”

The film shows that factory farming arose because of economic factors, with consumers calling for ever-lower prices. In a market economy, producers seek to supply whatever consumers demand. At the Fork shows that many consumers are now demanding ethically sourced meat and dairy products.

This system has many parallels to the private certification systems I have documented in my research. The London Stock Exchange, for example, was first created to give assurances to the public — its members adopted as their motto, my word is my bond. Similarly, the New York Stock Exchange provided a Good Housekeeping Stamp of Approval that its listed firms were not fly-by-night operations.

As Whole Foods founder and CEO John Mackey states, “For the first time ever higher degrees of animal welfare are being rewarded in the marketplace, and that’s creating incentives for people to innovate and create this race to the top.”

Although chains like Whole Foods are at the forefront of such movements, consumer demand is king at all price points. According to Temple Grandin, most consumers dislike the idea of gestation crates when they are told about them. At this point, America’s largest pork producer, Smithfield, is phasing out the use of gestation crates, while McDonald’s, Burger King, and Wendy’s are phasing out pork purchases from producers that use them. These are not exactly expensive food suppliers, but their actions show that greater awareness and demand from consumers can help improve animal welfare.

As an economist who usually spends time reading about financial markets and alcohol, I did not know how I would react to seeing At the Fork. In the end, I found the film very moving.

The film does not present anyone in a particularly bad light, and many, including Temple Grandin, come off in a good light. Grandin has been working for decades advising farms and slaughterhouses to be more comfortable and less stressful for animals. Grandin states, “Yes, I ethically justify eating meat, but we’ve got to give animals a good life, we’ve got to give them a life worth living.”

At the Fork is really a visual story that gets people to think in different ways about what abstract, philosophical questions. It is also presented in an aesthetically attractive way. Even if you don’t change your mind about the ethics of eating animals, watch it and enjoy.

Edward P. Stringham is president and director of research and education at the American Institute for Economic Research; Kathryn Wasserman Davis Professor of Economic Organizations and Innovation and Deputy Director of the Shelby Cullom Davis Endowment, Trinity College; research fellow at the Independent Institute; and past President of the Association of Private Enterprise Education. He is a member of the FEE Faculty Network.