Breweries will open as long as it is profitable, and if regulation doesn't stop them.

The past few years have seen a dramatic increase in the craft brewing industry across the United States. We had an 80% jump in the number of breweries in the country in just the three years from 2012 (2,401 breweries) to 2015 (4,225 breweries).

As a result, beer lovers have many more varieties of beer to choose, and the competition is keeping prices low.

The law plays an important role in the number of breweries per capita.

Yet, the number of breweries per capita differs dramatically amongst the states. According to the Brewers Association, people in Vermont have 9.4 breweries for every 100,000 adults over 21. Sadly, Oklahomans have only 0.5 breweries per 100,000.

Not Just Supply and Demand

Taxes also have an influence. The 5 states with the fewest breweries per capita have an average tax of 40 cents per gallon of beer compared to 18 cents per gallon in the top 5 brewery states. 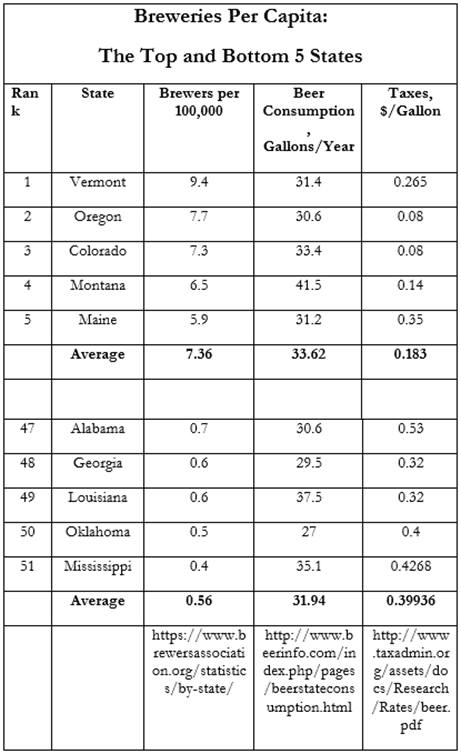 Laws about how breweries can do business also play an important role in the number of breweries per capita. In a state with a “self-distribution law,” breweries are able to sell their beer directly to restaurants, bars, and other businesses without using a distributor as a middleman. This can lower their distribution costs considerably.

Note that all 5 of the states with the lowest numbers of breweries — Alabama, Georgia, Louisiana, Oklahoma, and Mississippi — are in the South. Southern states tend to have higher beer taxes, laws against self-distribution, and other laws hindering breweries from opening.

Southern states are more likely to have restrictive laws.

Politicians need support to keep these laws in place, and Southern states have a combination of moral and economic interests supporting such laws — a combination that is not seen anywhere else in the US.

So states with lots of these Baptists are likely to have more restrictive laws. Southern Baptists make up over 30 percent of the population in Oklahoma, Mississippi, and Alabama. Beer-tax rates in these states are $0.40, $0.43, and $1.05 per gallon. Furthermore, none of these states currently allow self-distribution, although Oklahoma recently changed their law (the change is effective later this year).

The other source of support for these anti-brewery laws is economic interests. Who would benefit economically from there being fewer breweries? This would be current competitors, which include macro breweries and their distributors. If fewer microbreweries open, then the alternatives for beer consumers will be beers manufactured by the major breweries.

Several states changed their laws and saw a microbrewery boom.

In a recent paper, I found that in the South, the larger the percentage of campaign contributions from big breweries, the fewer microbreweries these states had. In any other region of the country, this relationship did not hold.

Fortunately, times are changing. As states struggled through the great recession, politicians looked for ways to increase entrepreneurship and employment. Several southern states have recently changed their laws and seen a boom in the number of microbreweries. This has been particularly true in North Carolina, which went from around 50 breweries in 2011 to 161 in 2015.

So, what can we predict with economics? Breweries will open as long as it is profitable. When taxes and regulations raise the costs of opening a brewery, we will see fewer of them. Politicians have to answer to their constituents. When anti-alcohol religious beliefs are strong, it is difficult for politicians to vote against their constituents and change laws.

However, when economic times are bad, politicians will weigh the lost votes from this moral group with the gained votes from the general population as a result of higher employment and economic growth.

Stephan F. Gohmann, Ph.D. is endowed professor of economics at the University of Louisville College of Business. As the BB&T Distinguished Professor in Free Enterprise, Gohmann is developing and teaching the economics course, The Moral Foundations of Capitalism, and participating in community outreach efforts to discuss these concepts with diverse audiences. He is a member of the FEE Faculty Network.