Jesus, Politics, and the Culture Fear

I don’t claim to know exactly what Jesus would do in every situation, but I’m pretty confident that he wouldn’t let fear and anxiety dominate his life in any situation.

I never recall seeing any verses in the Bible where Jesus was depicted as someone who treated his creative power as if it depended on anything that politicians were doing.

When Jesus was a baby, King Herod (a politician) tried to murder him. So he had a pretty good reason to live in fear of crooked politicians. When Pontius Pilate (a politician) claimed to possess the authority to determine if Jesus would live or die, Jesus was completely unintimidated by Pilate’s claim. In fact, he used the conversation as an opportunity to point out the fact that Pilate’s authority was inferior to the source of power that truly governed his life.

Do you really believe that your purpose in life can only be fulfilled if the "right" person is in office?Can you imagine how weak Jesus would have looked if he had failed to turn water into wine, or failed to multiply the fishes and loaves, or failed to raise Lazarus from the dead, or failed to restore sight to the blind because of some argument like, “I can’t fulfill my mission to usher in the Kingdom of God because these politicians are too corrupt.”

Can you imagine Jesus saying, “Sorry guys. I’d love to make some miracles happen and stuff, but we’re screwed. Herod’s in office.”

Jesus was angry at corruption, but never afraid of it, never intimidated by it. His sense of purpose and power seemed to be defiantly independent of what the rulers of his world thought of themselves. And after all this, he dared to say that his followers would do greater things than Him.

This seems to be at odds with the contemporary practice of walking about as if we’re irrevocably screwed as long as the “wrong” person is in office.

If you’re an atheist or an agnostic, you can easily file this under “More reasons to think Christians are irrational.” But if you call yourself a believer, this observation should give you pause.

You have every right to be passionate about politics and angry about injustice, but you might want to rethink your premises if you find yourself treating politicians as if they are the primary source of power in your life.

I don’t claim to know exactly what Jesus would do in every situation, but I’m pretty confident that he wouldn’t let fear and anxiety dominate his life in any situation.

Here’s an interesting little tweet I saw the other day that I’ll leave with you as food for thought: 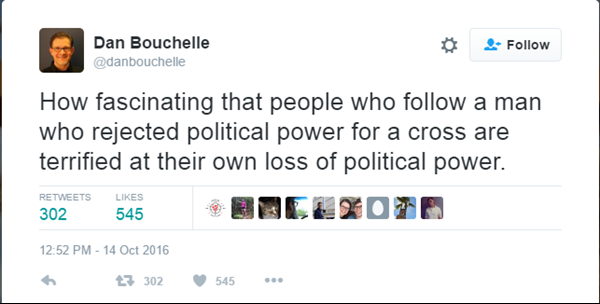 This first appeared at the author's blog.

T.K. Coleman is the Director of Entrepreneurial Education at FEE and is best described as a passionate voice for possibility. As a firm believer in the idea that freedom begins from within, his life mission is to help people reclaim a sense of personal power in their everyday lives.