In Us We Trust?

David Rose argues that trust is a prerequisite of economic growth 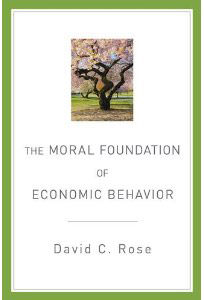 Economists find it easy to model human actors as rational utility maximizers, evaluating possible decisions in light of their likely outcomes and choosing those options with the most utility-maximizing consequences.

But in The Moral Foundations of Economic Behavior, David Rose argues that economic development depends on trust, and that trust can only be expected to feature prominently in a particular society when those who live in it understand key moral requirements—in particular, duties that preclude negative conduct.

As Rose notes, people who reason this way may not be particularly good trading partners. If someone assesses her options in each situation and alters her plans as her judgments about the best way to maximize her utility change, she’s unlikely to prove very reliable; she may steal from others or defraud them. And this kind of behavior will tend to dispose others not to want to trade with her. The more widespread a tendency to maximize individual utility is in a given society, the more wary people will be about trading with each other, and the more resources they will likely spend detecting and preventing opportunistic behavior.

In such a society, the benefits of widespread trade won’t be available. The society will be poor.

Those who are, in the economists’ sense, “rational” won’t be likely to behave as case-by-case maximizers. They may not be concerned about the societal consequences of fostering distrust, but they almost certainly want others to deal with them. And anyone with the reputation of being willing to cheat others is someone with whom others won’t want to trade. The discipline imposed by continuous dealing will thus dispose rational actors, even ones who might be inclined to cheat, to behave reliably.

However, the discipline of continuous dealing can’t make everyone reliable all the time. Frequently, people engaged in trading relationships are strangers, and it’s not always possible for either to be aware of the other’s reputation. And institutional mechanisms designed to require accountability from those who steal and defraud are anything but uniformly effective.

Rose focuses on a further, even more serious problem: Reputational and similar mechanisms for ensuring good behavior only work when theft and fraud can be effectively detected, but they frequently cannot. People often enjoy what Robert Frank has termed “golden opportunities”—opportunities to take advantage of others with essentially no possibility of detection. These opportunities are particularly likely to arise in connection with open-ended contracts that leave the parties with lots of discretion. One party to such a contract may be able to cheat the other with no realistic possibility of detection: While it may appear to an observer that she’s fulfilling her obligations, she may in fact be taking unfair advantage of her trading partner.

While no one may be able to detect this kind of cheating, the expectation that it might occur is enough to put a damper on people’s expectations. Trust will be inhibited, and thus so will trade—and therefore prosperity. A society can achieve the kind of wealth that widespread trust makes possible only if everyone is committed to being trustworthy even when no one’s watching and even when behaving in an untrustworthy manner won’t lead to perceptible harm to any individual.

To foster prosperity, people need to be moral, not in order to avoid bad consequences, or even in order to achieve good ones on a case-by-case basis. They need to have internalized preferences for trustworthiness—most effectively fostered by culture—that can’t be overridden by the desire to benefit themselves or others in particular situations. They need to think of the duty to be trustworthy as, effectively, absolute. A society in which people reason this way will be able to sustain widespread, persistent trust. Economic relationships among strangers will be possible, social cooperation will flourish, and prosperity will ensue.

Rose is clear that the economist qua economist can’t show that people ought to be moral, or what form moral principles ought to take. But he argues that economists can show that societies in which particular moral principles are widespread will prosper. And I’m inclined to agree: Cooperation among strangers is the foundation of prosperity, widespread trust makes cooperation possible, and a moral—and not merely instrumental—commitment to reliability is a foundation for widespread trust.

There are interesting questions to ask about Rose’s arguments: When does background injustice reduce the duty to be trustworthy? What determines when a putative moral requirement really is a moral requirement? How shall we determine just what open-ended, relational contracts actually require? But, however we resolve these questions, Rose has made a convincing case that a society full of trustworthy people will be effectively positioned to experience the miracle of economic growth.