In Government, Nobody Quits – And You Can't Get Fired

Public employees are 70% less likely to be fired

Government work is pretty sweet, if you can get it. If you have to pay for it... not so much.

The government has one of the highest paid workforces in the country. Federal bureaucrats make 78% more in total compensation than people in the private sector. State and local employees make on average 25% more.

Combined with laws that make it extremely difficult to fire public employees, even for explicit or criminal misconduct, it's no wonder that hardly anyone leaves.

The administrative process meant to prevent against politically motivated firings is the civil servant protection system. The rules give employees the right to appeal a termination, a process that can take up two years. ...

Five years ago, the General Services Administration (GSA) spent more than $800,000 on a lavish conference in Las Vegas. ... Two managers were initially fired but got their jobs back after the MSPB reversed the decision. ...

Firing belligerent or hostile workers is difficult, too. One former manager told CBS News he tried for more than a year to fire an employee who was intimidating co-workers and superiors, at one point even chasing a manager down the hall.

The federal government is not unique in this. Rules vary across cities and states, but thanks to union contracts and special "law enforcement bill of rights," it's almost impossible to fire a cop, even for obvious criminal misconduct, let alone ordinary incompetence.

The same is often true for teachers. Thank to tenure, union rules, and other political privileges, firing a bad teacher is really hard. New York City alone spends $22 million a year to keep problem teachers in "rubber rooms," away from kids, as they bounce around the arbitration process while the city tries to fire them.

Lest you think this is just anecdotal, look at the data on job separations. The turnover rate in government is a third of that in private industry.

Why is that? Because, to a close approximation, nobody quits. The quit rate of government employees is 70% lower than the private sector. (This also rebuts the claim that we should pay public employees so much because they have such hard jobs... that they almost never want to leave.)

And, to a close approximation, nobody gets fired, either. The rate of firing and layoffs for public employees is 71% lower than in the private economy (except for once in the summer of 2010, when states had such massive revenue shortfalls they literally did not have the money to pay them). 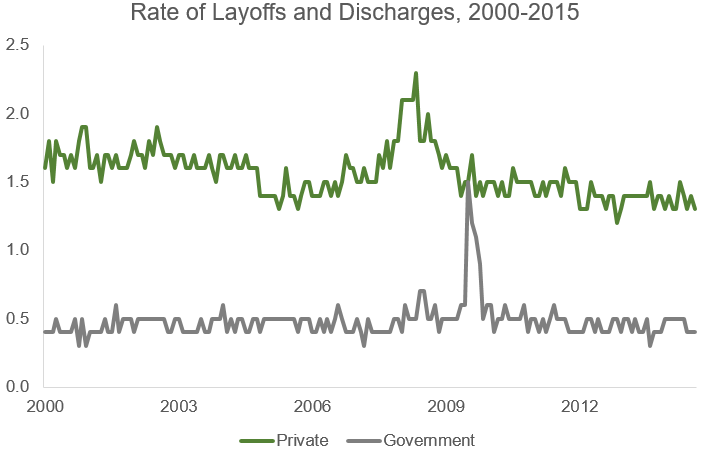 If you want, you can choose to believe that government employees are somehow three times more competent, honest, and productive than private employees, but that doesn't seem very probable. What seems more likely is that government officials are just like the rest of us, but the political system protects their jobs and pays them substantially more than their services would be worth in the private sector.

In general, it's a sweetheart deal for public employees: make a bunch more money, don't worry about getting fired or laid off, retire and collect a pension (or two, or three). That doesn't make them bad people (although it should concern all of us that bad apples are very hard to remove from government).

But neither does that make it a good deal for the people they are ostensibly working for and who are forced through taxes to pay their salary (and pay the costs whenever one of them gets sued for hurting someone).

The fact that public employees never leave is both a cause and a symptom of the problem with government. It makes public services — from police to education to the DMV — less efficient, less productive, and more expensive than they ought to be. But more fundamentally, it exposes the danger of having a government so big that public sector unions can dictate terms to the elected officials who are supposed to represent the taxpayers and the general public.