In 1970, Milton Friedman Called for Unilateral Free Trade Rather Than Retaliation. We Still Haven’t Learned That Simple Lesson.

America still suffers from a pervasive and serious national deficit of clear thinking and elementary understanding of trade. 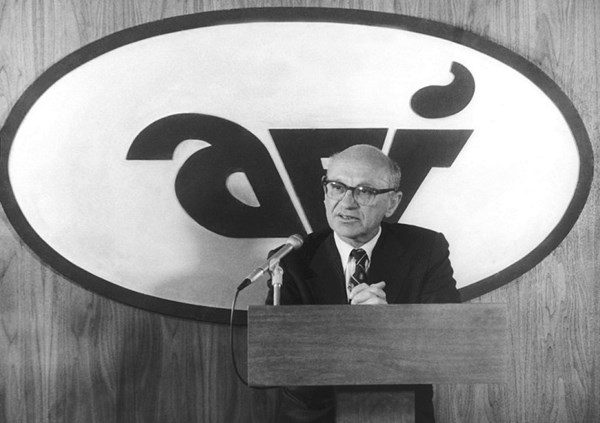 Between 1966 and 1983, Milton Friedman (pictured above at the American Enterprise Institute in the 1970s) wrote more than 300 op-eds for Newsweek, and those op-eds are all available online courtesy of the Hoover Institution’s Collected Works of Milton Friedman website.

In August of 1970, Friedman’s Newsweek op-ed titled “Free Trade” was in response to a bill Congress was considering at that time to impose import quotas on textiles and shoes to protect the textile industry in the Carolinas from foreign competition and cheap imports. The “favorite whipping boy” of the protectionists back then was Japan, and Friedman referred to Japan throughout his article. I’ve taken the liberty of modifying and updating Friedman’s op-ed slightly by substituting China for Japan in order to reflect the “favorite whipping boy” of today’s protectionists. And I’ve also updated the last paragraph to reflect today’s favored domestic industries being artificially protected from competition with Trump’s tariffs.

The proponents of protectionism say, “Free trade is fine in theory but it must be reciprocal. We cannot open our markets to foreign products if foreigners close their markets to us.” China, they argue, to use their favorite whipping boy, “keeps her vast internal market for the private domain of Chinese industry but then pushes her products into the U.S. market and complains when we try to prevent this unfair tactic.”

The argument sounds reasonable. It is, in fact, utter nonsense. Exports are the cost of trade, imports the return from trade, not the other way around.

Suppose China were incredibly successful in her alleged attempt to restrict imports into China, managing to dispense with them entirely. Suppose that China were incredibly successful in her alleged attempts to push exports to the U.S., managing to sell us large quantities of assorted goods. What would China do with the dollars she received for her exports? Take crisp greenbacks back to Beijing to stash in the vaults of the Bank of China? Let deposits at U.S. banks pile up? Jolly for us. Can you think of a better deal than our getting fine textiles, shiny cars and sophisticated TV sets for a bale of green printed paper? Or for some entries on the books of banks? If the Chinese would only be willing to keep on doing that, we can provide all the green paper they will take.

China does impose numerous restrictions on trade—though in recent years she has been reducing them. Those trade restrictions hurt China and they hurt us—by denying them and us mutually profitable trade. In China no less than in the U.S., concentrated producers exert a greater influence on government than widely diffused consumers and are able to persuade the government to fleece the consumer for the benefit of the producers.

However, we only increase the hurt to us—and also to them—by imposing additional restrictions in our turn. The wise course for us is precisely the opposite—to move unilaterally toward free trade. If they still choose to impose restrictions, that is too bad but at least we have not added insult to injury.

This is clearly the right course for action on economic grounds. But it is also the only course of action that is in keeping with our political position in the world. We are a great nation, the leader of the free world. Yet we squander our political power to appease the steel, aluminum and washing machine industries! We should instead be setting a standard for the world by practicing the freedom of competition, of trade and of enterprise that we preach.

(ht/ John Phelan of the Center of the American Experiment)

While the protectionists’ favorite whipping boy today is China and not Japan and today’s politically favored domestic industries receiving trade protection are steel, aluminum, and washing machine producers and not textile and footwear producers, Milton Friedman’s economic logic and wisdom about trade are just as relevant, cogent, and convincing today as they were almost half a century ago in 1970.

Unfortunately, nearly 50 years after Friedman’s op-ed in Newsweek, in addition to thousands of other articles, books, essays, and op-eds about trade written by him and others, America still suffers from a pervasive and serious national deficit of clear thinking and elementary understanding of trade, starting at the top of the current administration’s team of mercantilists/protectionists/scarcityists.